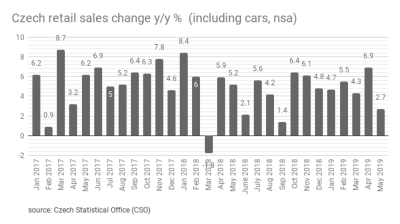 Seasonally adjusted Czech retail sales fell 1% month-on-month at constant prices in May after very strong growth in previous months, and marked the slowest growth in 2 years. The only exception was sale of motor vehicles that stagnated at constant prices, the Czech Statistical Office data revealed on July 9.

At the same time, adjusted retail sales increased at constant prices by 2.7% y/y -- well below market expectations of a 5% growth – in the smallest gain in retail trade since September of 2018, as sales slowed for food, beverages & tobacco, amongst other categories.

Retail sales online and via mail order services grew by 19.4%, leading to an increase in sales y/y. UniCredit economist Jiri Pour, quoted by the Czech News Agency, says decreasing consumers confidence may be behind the poor growth figures. "It's been disrupted mainly by fears of developments abroad, where dangers of trade wars among others are tangible," said Pour, adding that raising wages and extremely low unemployment can still boost consumption, which will remain to drive the economic growth.

“All in all, this was a surprisingly weak figure for retail sales in May (a similar trend has been seen in Hungary, Poland and Romania), but we believe it might be combination of one-off factors,” said ING chief economist Jakub Seidler.

“Year-to-date growth remains at 5%, the same as last year, but some slowdown this year is likely as household confidence declines due to concerns about an economic slowdown. While the labour market is tight, as confirmed by June numbers from MinLab, households are signalling higher intentions to save, which might weigh on spending in the second half of the year, in our view,” he added.

CEE dealmaking back at pre-COVID levels in H1, says Mergermarket

National Recovery and Sustainability Plan projects, together with higher exports and domestic consumption to drive recovery in Bulgaria.

Bulgaria’s central bank revises up 2021 economic growth forecast to 4.1%
2 hours ago
Average gross wage in Slovenia up by a real 3.9% y/y in May
2 days ago
Polish retail sales ease growth to 8.6% y/y in June
2 days ago
Natural disasters caused €80mn of damage to Croatian agriculture in 2021
3 days ago
Poland’s industrial production eases growth in June
3 days ago