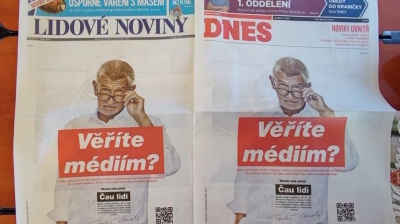 Andrej Babis: “Don’t you feel that television, newspapers and news websites are only telling you part of the story?" / bne IntelliNews
By Robert Anderson in Prague September 6, 2022

Czech billionaire populist Andrej Babis has taken out front page advertisements in two of his own newspapers calling on readers to ignore the media and tune in instead to his own social media show.

Opponents of the former premier jumped on the move as yet another example of the way Babis has encouraged mistrust of the media and misinformation.

During his 2017-2021 government the premier regularly attacked the media, particularly the state broadcaster, which he argued was biased against him.  His ANO party voted for board members that consistently harassed Czech Television’s chief executive.

Veronika Sedláčková, of the Czech branch of the International Press Institute, told The Guardian that Babis’ campaign was “an attack on serious journalism and serious media”.

“[Mr Babiš’] goal is to weaken the influence of serious media, and weaken public trust in the journalists and democratic institutions of the Czech Republic.”

Babis, an agro-chemical billionaire, entered politics by buying two of the country’s main newspapers, Mlada Fronta Dnes and Lidove Noviny, in 2013 and turning them into mouthpieces of his new Ano party. He became finance minister in 2014 and was prime minister from 2017 until December 2021.

Babis has also invested in expensive and very effective social media campaigns, portraying himself as an ordinary guy in his Cau Lidi (Hi folks) social media show, even though in reality he enjoys a billionaire lifestyle.

Before the last general election, the Pandora Papers leak revealed that he had bought a chateau in the south of France for £13m, using an offshore structure. Babis has dismissed any wrongoing and blamed the leak for his election defeat.

In the adverts, under a large picture of himself, Babis asks “Do you believe the media?” and “Don’t you feel that television, newspapers and news websites are only telling you part of the story? That they don’t talk about anything? That they leave something out? Or are they deliberately omitting something?”

Babis’ ANO party is standing across the country in Senate and municipal elections on September 23-24 and the premier is expected to launch his campaign for president this autumn ahead of the elections in January.

ANO held a vote of no-confidence in Prime Minister Petr Fiala last week, attacking his government for mishandling the cost of living crisis and a corruption scandal inside the STAN party.

However, Babis’ hopes of  returning to power are overshadowed by his trial in the Capi Hnizdo case, which begins on Monday, where he is accused of fraudulently claiming EU funds. Moreover, opinion polls currently show that the would lose the run-off in the presidential election to former general Petr Pavel.

Anti-regime protesters in Iran call for three-day economic strike
8 hours ago
Russian oligarch Mikhail Fridman arrested in London on money-laundering charges
11 hours ago
Bulgaria’s Borissov compares himself to Messi as he aims for comeback
12 hours ago
Kosovans accuse FIFA of double standards after reports of death threats from Serbia fans
21 hours ago
Turkey’s Syria, Iraq air strikes conducted with knowledge of Russia, US, says academic
1 day ago