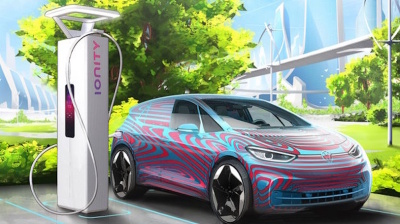 VW's Skoda already produces several plug-in hybrid models but it is now set to become part of VW’s ambitious plans to be the world’s leading EV producer by 2025.
By bne IntelliNews July 28, 2021

The Czech government has backed a memorandum between the Ministry of Industry and Trade (MIT) and state utility company CEZ on construction of a CZK52bn (€2bn) electric vehicle (EV) battery plant which should create at least 2,300 jobs, according to a press release by MIT.

"The automotive industry is the cornerstone of the Czech economy and its share in our GDP is almost 10%. Now, in line with our strategy The Country for the Future, we need to take steps to move this to the next level. Electromobility is a reality and it is very important that one or more battery cell factories are built right here in the Czech Republic,” said Minister of Industry and Trade Karel Havlicek.

“Each of the factories could employ more than two thousand people directly at the plant and thousands more jobs will be created in related sectors. Our government is ready to provide the conditions to support the project, including building key infrastructure," he added.

The EV battery plant is a strategic project that will accelerate the transformation of both the energy and automotive industries in the country. Also the associated lithium mine projects – lithium is a key materail used in batteries – are opportunities to improve the living conditions of regions facing structural transformation as the coal industry is shutting down.

"CEZ is the largest operator of public charging stations in the Czech Republic and we are ready to expand our business to other parts of electromobility. We are preparing a lithium mining project in Cinovec, which could be used in a domestic battery cell factory," commented Chairman of the Board of Directors and CEO of CEZ Daniel Benes.

The former brown coal-fired power plant Prunerov, belonging to CEZ, is one of the potential sites for building the factory. State support for the plan has not been determined; however, it will consist of direct support and tax relief.

"CEZ´s share in the project is not clear at the moment, CEZ might be as both a developer and a company that will supply the land, energy, services and lithium, and then there should also be a technology partner and possibly a partner from the automotive sector,” said Benes, adding that one of the partners could be the biggest Czech carmaker Skoda Auto.

According to Havlicek, Volkswagen, the German carmaker which owns Skoda Auto, and South Korea's LG have shown interest in this project. Under an optimistic scenario, an EV battery plant might be built by 2026-2028.

"The construction of at least one factory is a necessity if the Czech Republic wants to defend its position in the automotive industry. I see Volkswagen as a slight favourite, given its traditional ties to the domestic economy. Unless, of course, it overstates its demands," commented ENA analyst Jiri Gavor for the Czech News Agency.

In April last year, CEZ, through Severoceske Doly, became the majority owner of Geomet, which holds the preferential rights to explore and exploit lithium near Cinovec in the Krusne Hory, and holds 51% of the company, while the rest (49%) belongs to Australian company European Metals Holdings (EMH).

Lithium was a major political issue ahead of October's general election back in 2017, when it was used by the populist ANO party of billionaire and current Prime Minister Andrej Babis to attack the Social Democrat government of PM Bohuslav Sobotka, of which it was a member.

Critics accused the Social Democrats of corruptly allowing a foreign company to profit from Europe's biggest deposit of lithium,  despite the fact that EMH had long had the right to explore in the area and thus first right to mine whatever it discovered. Sobotka signed a memorandum on the lithium project at Cinovec with EMH just before the elections.

Later in March 2018, Czechia revoked the memorandum which Babis described as an invalid document. The revocation appeared to be more political theatre than anything that would damage EMH or provoke it to launch arbitration against the country. CEZ subsequently reached a deal to enter EMH's subsidiary Geomet.

CEZ should make a decision on a lithium processing plant next year while the plant's production itself should start in 2025.