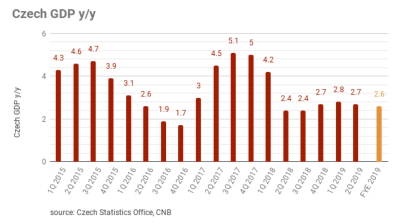 Czech economy posted a further growth and its GDP increased by 2.7% year-on-year in 2Q19
By bne IntelliNews August 15, 2019

The Czech economy posted further growth and GDP increased by 2.7% year-on-year in 2Q19, a preliminary estimate published by the Czech Statistical Office (CSO) on August 14 showed. The GDP adjusted for price effects and seasonally adjusted went up quarter-on-quarter as well, by 0.6%.

CSO noted that household consumption and external demand drove the economy in 2Q19. The office also stated that a gradual decrease of the growth dynamic of investment activity continued in 2Q19.

Michal Brozek, Komercni Banka analyst, pointed out that the y/y growth was 0.1 higher than the market expected and it met the Czech National Bank prognosis. “Q/q growth of the GDP equalled the growth in 1Q19, which is positive news given the fall of German economy. Czech economy remains to resist the externalities quite well. Even though the Czech economy continues to grow above its potential, significant risk of its slowdown is on the horizon,” added Brozek.

According to the UniCredit Chief economist Pavel Sobisek, recent growth can be seen as a success. „Part of the export performance is expected to pull international supply chain frontloading in 2Q19, fearing Brexit impacts. Actually, current higher amounts of stocks mean their lower future demand,” said Sobisek, as quoted by the E15.cz, adding that lowered demand from abroad will soon come down on Czech economy.

Chief Analyst at Generali Investments CEE Radomir Jac expects that Czech economy will growth by 2% y/y in the 4Q19. “Czech economy has kept a solid immunity against negative impacts from abroad. The question is, to what extent can an export-oriented Czech economy disengage from those impacts in the coming quarters,” commented Jac. He believes that “the world economy development and its negative impacts on Czech export is the weak spot of the economy.”

After a year and a half, Czech economy finally performed better than the Slovak, Czech Fund Chief economist Lukas Kovanda noted. “Czech economy was still doing good in 2Q19. After many quarters it left the place for the worst performing economy among Visegrad countries. Slovak economy negatively surprised the markets with recorded y/y growth only at 1.9%, while analysts expected the growth at 3.1%,” said Kovanda.

According to analysts and data of the CSO, the nominal value of Czech GDP has grown by 700% since 1989. While in 1990 GDP stood at CZK672bn (€26.1bn) at current prices, today it amounts to more than CZK5.3tn (€205.6bn). In real terms, considering the price developments and other indicators, the size of Czech economy has doubled since the fall of communism 30 years ago.

The Czech Finance Ministry has raised its GDP forecast for 2019 and predicted a better economic performance this year and a slowdown in 2020. In its updated July outlook the ministry shows the 2019 figure improved by 0.1pp but 2020 figure worsened by 0.1pp to 2.5% and 2.3%, respectively. This updated outlook will be used for the formulation of the Czech 2020 draft budget and for the 2022 budget perspective.

As covered by the bne IntelliNews, Central and Eastern Europe (CEE) economies are weakening but domestic demand offsets Eurozone slowdown. CEE as a whole grew by 4% in 2Q19, against "old Europe's" growth of 1.1%. GDP growth figures from the second quarter of this year were down on the first quarter but showed that growth was still being supported in CEE by domestic demand that has gone some way to offsetting a noticeable slowdown in the Eurozone.