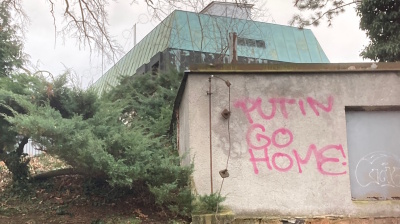 Graffiti outside Russia's huge embassy in Prague: Russian intelligence is increasingly relying on agents with business covers since the expulsion of Russian diplomats after the Vrbetice ammunition depot sabotage. / bne IntelliNews
By Albin Sybera September 2, 2022

Scores of German police units raided companies in cities in the south and north of the country on Tuesday. German media report that a network of local companies is being probed for illegally exporting highly toxic substances to Russia, including those used for production of combat nerve gas Yperite and the Novichok nerve agent, used by the Russian dictatorship to try to eliminate its enemies, such as the defector Sergei Skripal and opposition leader Alexei Navalny.

The raids were the result of the joint operation of the Czech BIS and German security agencies BND and BFV against private Russian company Chimmed Group, which is linked to Russia's FSB and a Russian army supplier, as Bellingcat established.

Spokesperson of BIS Ladislav Sticha declined to comment on ongoing investigations but noted that BIS is active in preventing the export of goods used for multiple purposes. “Cooperation with our partners abroad is important for preventing exports to sanctioned countries such as Russia and China”, he told Aktualne.cz.

The US is sanctioning German and Russian companies suspected of exporting substances for chemical weapons, but the EU has not adopted these measures yet.

Lukas Valasek, Aktualne.cz editor and author of the latest report, told bne Intellinews that Russia’s intelligence is relying on their agents with business covers. Especially so after the latest rounds of expelling Russian diplomats as a result of the GRU's involvement in the Vrbetice ammunition depot explosions and the Russian invasion of Ukraine saw the extensive diplomatic staff in Czechia curtailed to minimum.

Agents with business cover “are ideal for obtaining technologies which are now difficult to obtain in Russia as a result of sanctions, and which are important for Putin’s regime to renew its military capabilities after the heavy damages it has received by the Ukrainians”, explained Valasek.

In the past some of the Russian drones used to direct fire at Ukrainian positions in Donbas contained particles from Czechia exported by a company called World Logistic Group which is now defunct.

The company was founded by two Russian nationals in the Western Bohemian spa city of Karlovy Vary known for its large Russian expat community, as Valasek and his colleagues investigated last year.

It is expected that Russian intelligence will continue to intensify its operations inside the EU to provide technologies, chemicals and missing particles for the Russian military and its aggression in Ukraine as sanctions curtail normal trade.