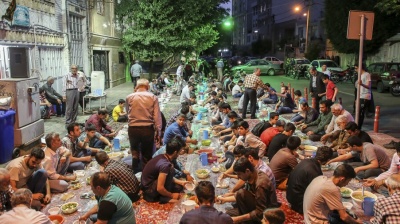 Iranians will face a struggle keeping up spirits as the sanctions-induced recession tightens. Pictured are Iranians eating Iftar—the evening meal with which Muslims break their fast at sunset during Ramadan—together.
By bne IntelliNews October 10, 2019

“The expected deterioration in economic growth would mean that by the end of 2019/20 the economy would be 90% of its previous size compared to just two years earlier,” the report noted.

In its outlook section, the update said: “The medium-term economic outlook remains challenging. The baseline assumption for the medium-term rests on continued oil exports of around 500 thousand barrels per day on average in 2019/20 and the following years.”

As things stand, Iran is battling to keep up a reasonable level of lifeline oil exports in the face of a campaign by the US to drive all Iranian crude off world markets.

The report added: “In the course of the next two years (2020/21 to 2021/22) the economy is expected to grow at 0.5 percent annually, from a considerably smaller base. Inflationary pressures are expected to moderate but annual inflation is expected to remain above 20 percent which is considerably higher than the country’s single digit inflation during 2016-17 and relative to other countries in the region.

“In the coming years, the effect of the recent large exchange rate depreciation could allow the country’s goods and services to become more competitive regionally and help close the expected current account deficit gradually. The fiscal deficit is projected to further widen in the next two years due to the legacy of the 2018-19 oil shock pushing government expenditures such as social protection measures upwards at the same time as receiving lower oil income and tax revenues.”

Political and economic uncertainty makes it difficult to project future poverty trends in Iran, the update observed. “However, a sharp decline in real GDP per capita and double-digit inflation are expected to have a strong negative impact on poverty rates through different channels, including the labor market, increasing costs of living and a further erosion of the real value of cash transfers.

“Future poverty rates will also depend on the government’s public policy response. Any increases in the value of cash transfers, possibly along with introducing targeting mechanisms, could help the poor and vulnerable population cope with the social-economic shocks, but fiscal constraints may limit the scope for significant response.”

Looking at risks and challenges, the report said that the nature of uncertainties facing the economy means that downward risks to the projected growth path remain in place.

It added: “If oil exports were to be curtailed further, the economy could enter into a deeper recession and experience higher inflation rates. The challenge of protecting the vulnerable households would put additional pressure on the government finances and potentially the value of rial.

“Further restrictions on existing trade volumes and financial transaction arrangements with Iran’s neighbors could also pose a major risk to the current projections. If remaining unaddressed, the ongoing liquidity and recapitalization challenges of the banking sector could further undermine banks’ ability to continue facilitating economic activity.”

The report concluded that the highlighted key challenges underlined “the crucial role of further economic diversification by focusing on non-oil sources of growth and government revenues. Building on the existing economic base in the non-oil traded sector would improve resilience to external shocks and achieve a long-envisioned development plan goal that has been elusive to Iran and other countries in the region”.