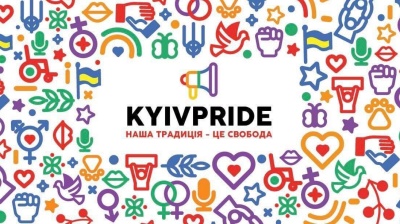 Ukraine celebrated its seventh Kyiv Pride day on June 23 with a record turnout of 8,000 people, twice the level of last year, who marched through the capital despite violent threats from far right extremists who had also travelled to Kyiv to prevent the march.

The police presence was high but apart from one slight scuffle right at the start of the march, the event passed off without incident. A man rushed the front of the column and attempted to rip a banner out of the hands of the participants, but was quickly removed by security and handed over to the riot police on duty.

Right wingers and nationalist groups travelled to Kyiv the day before to attend a rock concert featuring far right bands from across Europe, whose lyrics are openly racist and Anti-Semitic. The groups attempted to occupy the space in the city centre where the pride march was due to begin and set up a tent and chairs, but the “exhibition” remained largely empty and was cleared away before the pride march began. Police were careful to segregate the groups.

One group of anti-LGBT protestors calling themselves “Freikorps”, wearing nazi-style uniforms and carrying banners written in Gothic script, were isolated by the police. Their 21 year-old leader said they were there to protest against “cultural Marxism and the internal enemy.” 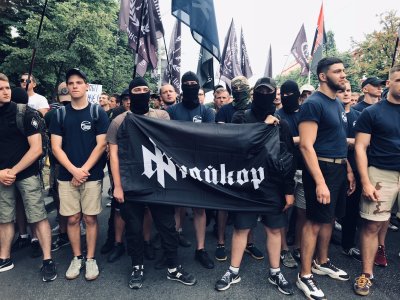 Nationalist groups accuse the LGBT community of being unpatriotic and want them to leave Ukraine. In a separate incident a crowd of Pride participants arriving via metro burst into a spontaneous rendition of the national anthem at the metro station.

Several EU ambassadors were in attendance to show their solidarity and their presence also ensured police tightly controlled the crowds to prevent violence.

In a first, a group of volunteer soldiers had returned from the frontline in Donbas and marched to show their solidarity with the LGBT community, despite widespread disapproval of alternative sexuality amongst the military.

“That’s Viktor Pylypenko, an openly gay Donbas battalion volunteer soldier. He’s done big things to bring attention to LGBT rights and challenge stereotypes in Ukraine,” tweeted Christopher Miller, the RFE/RL Ukraine correspondent, identifying one of the soldiers speaking to media to explain why they had come.

British Ambassador Judith Gough was amongst those that marched. “Found some fellow Ambassadors at #KyivPride. Great to see Canada, Sweden, Norway, US, Finland, Germany and others!” she tweeted. 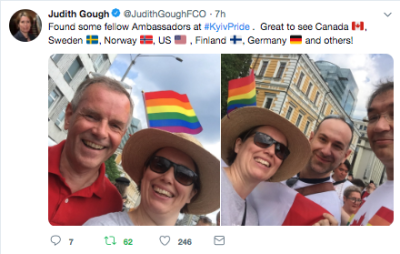 While Ukrainian President Volodymyr Zelenskiy did not explicitly comment on the Pride march he did release a general statement emphaisising Ukraine’s commitment to human rights, including a commitment to reject discrimination.

“The president is the guarantor of human rights and freedoms. The Constitution of Ukraine states that citizens have equal constitutional rights and freedoms and are equal before the law, and therefore there can be no privileges for or restrictions on various grounds based on skin, colour, gender, nationality, language, etc,” the president said in a statement translated by RFE/RL’s Miller. “Every citizen should feel safe and not subjected to violence. The National Police of Ukraine should enure the safety of all Ukrainians in the March of Equality and take measures to prevent clashes between supporters and opponents of the march.”

LGBT is a tricky issue for all the leaders of Commonwealth of Independent States (CIS) countries as homophobia is widespread. In most countries, including Ukraine, the vast majority of the population believe homosexuality is a sickness that can be cured and the average voter remains against open promotion of alternative lifestyles and sexuality. With a general election to win in July the president’s office was being careful to find a middle line between supporting the march and the EU values it represents without upsetting the general population.

The only high level official to openly support the Pride march was Ivanna Klympush, Deputy Prime Minister of Ukraine for European and Euro-Atlantic Integration.

“#KyivPride today: freedom is our tradition! We confirm our commitment to free, open, democratic #Ukraine with no place for discrimination. I strongly believe that strenth of our nation is in diversity and unity,” she tweeted. 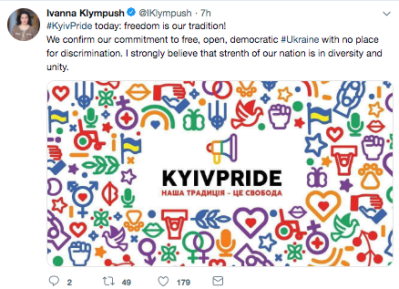 All-in-all the march was a big success. At the first Kyiv Pride only a small crowd appeared, which was entirely surrounded by a double cordon of police and stayed in a isolated part of Kyiv. This year the march went through the centre of the city and had a carnival atmosphere.