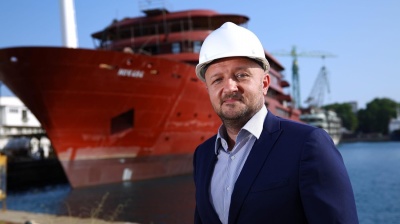 Croatia’s DIV Group has agreed to take over troubled Norwegian shipyard Kleven Verft, the Norwegian company said in a statement posted on its website.

Kleven Verft has been in difficulties for several years, and was taken over by the Norwegian shipping company Hurtingen to complete the construction of the ships already on order.

The Croatian industrial group has now signed an agreement to buy Kleven Verft from Hurtigruten, with the contract expected to be finalised in the next few weeks. The size of the deal was not disclosed.

Kleven Verft CEO Kjetil Bollestad said he was “incredibly happy” on behalf of the company’s employees to have a “new and solid shipyard owner”.

“We went through a difficult period and were able to deliver fantastic ships while maintaining a high level of expertise in our shipyard. Together with the new owner, we have long-term plans,” Bollestad added.

“We are very pleased to have signed this agreement, which provides an opportunity to connect the two shipyards with a long tradition. Kleven is recognised throughout the world as a Norwegian shipyard with top references, especially in the fitting out of complex ships,” said DIV owner and CEO Tomislav Debeljak, according to the statement.

“I am most pleased that Brodosplit, which we managed to place extremely well in the segment for the construction of medium-sized and polar cruise ships, has found a business partner with whom they will be able to achieve top results. Currently, Brodosplit is one of the most efficient shipyards in the world in terms of design and construction quality, speed and construction technology. The ship we build is a visible and globally recognisable product, but we want more, which is why we are now thrilled to have Kleven connected with Brodosplit.”

Debeljak forecast that synergies between the two companies would result in lower construction costs and significantly reduce costs to finance new projects. “The total savings can amount to up to 5%, which will allow us not only to increase our profitability, but also competitiveness when we contract and build complex medium-sized vessels,” he said.

Naftogaz in talks with investment banks over possible IPO
3 hours ago
Polish miners send new warning to PiS government
2 hours ago
Hungarian PM warns of storm clouds ahead in state of the nation speech
14 hours ago
Belarus president threatens to take transit oil from Russia-EU pipeline amid dispute with Moscow
15 hours ago
Serbia and Kosovo agree to restore railway, motorway links
1 day ago