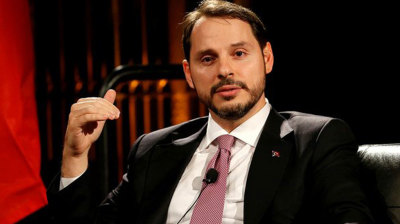 Finance minister Albayrak is under pressure to explain changes in the formulating of Turkey's inflation figures.
By bne IntelliNews June 19, 2019

Turkey's main opposition party has filed a motion to parliament stating that adjustments to the methodology used by the Turkish Statistical Institute (TUIK) when calculating inflation were unprecedented and damaged credibility.

In the June 19 motion requesting a response from Finance Minister Berat Albayrak, Republican People's Party (CHP) MP Gursel Tekin asked whether he had requested that TUIK limit the rise in inflation in a "fictional" way.

"Since salary hike rates are linked to the rise in inflation, when the announced number is then not in line with real inflation, millions of employees are wronged," he said in the text of the motion.

"The unprecedented practices in the April inflation data damage the credibility of the [TUIK] institution," Tekin said in his motion.

bne IntelliNews has repeatedly questioned the credibility of inflation data released by the TUIK in recent months. Changes in formulating inflation became particularly evident after some key personnel changes at the institute. Applied economist at Johns Hopkins University Steve Hanke has lately been assessing Turkey’s annual inflation rate as realistically running at around 49%.

According to TUIK data, annual inflation slowed to 19.5% in April. It hit a 15-year high of 25% in October last year following the currency crisis.

TUIK has previously refuted as untrue claims that its statistics were not correct or were put out under the sway of political influence.

In his complaint, Tekin cited an irregularity in data dealing with footwear and clothing, as well as automobiles. He added that analysts believed that changes in two components could affect inflation by 0.5 percentage points.

He said the quality adjustment on the clothing index, which was previously around 0.2%, was calculated as 4% in April's data, which he said was "known to be impossible". Such adjustments, based on judgments of the quality of inflation basket items, are generally very low in an effort to maintain the usefulness of the comparison in the data.