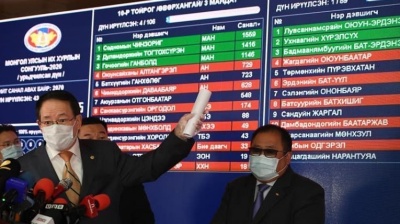 The ruling Mongolian People’s Party (MPP) has won a landslide victory in Mongolia’s eighth parliamentary election, winning 62 seats of the 76 seats in the State Great Khural compared to the 65 it took in the previous poll, and 40% of the vote. Prime Minister Khurelsukh Ukhnaa can now move ahead and form a cabinet to serve as the 17th government since a revolution brought communism to an end in Mongolia 30 years ago.

The opposition Democratic Party took 11 seats, compared to the nine they had in the last parliament. Turnout was 73%, though some polling stations were reportedly cut off because of rainstorms. An independent and candidates from two new third parties won the remaining seats.

Neils Hegewisch, country director of the Friedrich-Ebert Foundation Mongolia, told AFP that the “voters did obviously reward the handling of the coronavirus crisis by the Mongolian government and put their trust in the leadership of PM Khurelsukh”.

"Certainly, a victory of this magnitude comes with a great responsibility. Economically, Mongolia is facing tough times," he added.

The MPP government's handling of the pandemic paid off at the ballot box (Credit: Salameno.ir).

Mongolia, a landlocked nation sandwiched between Russia and China, became only the second Asian country to hold a general election since the coronavirus (COVID-19) pandemic threw a shroud over the world. It is a parliamentary democracy with a first-past-the-post electoral system, though its president holds veto powers over approved legislation.

Gerelt-Od Erdenebileg, professor of political science at the Mongolian State University of Education, told CNA the country's majoritarian system favours the big parties."If we keep this system, the MPP will win for ever," he said.

A May survey published by Sant Maral Foundation, a Mongolian polling group, and cited by the Financial Post, found unemployment and widening income disparities were the biggest concerns ahead of the election, but it also identified strong public support for the government’s handling of the coronavirus crisis, with 49% saying it was the administration’s biggest success.

Khurelsukh knows the hard part of his new term in office has already begun, given that the economic impacts of the COVID-19 emergency are no small matter for Mongolia, a country that needed an IMF-led $5.5bn bailout as recently as 2017.

Many businesses have been shuttered during the containment restrictions brought in to ensure the country did not suffer a severe coronavirus outbreak. While the official number of infections remains very low (216 in a nation of 3.17mn people, with no deaths), the constraints brought about by fighting the virus and the toll they have taken on global demand still pose dangers to the economy, especially in terms of coal exports, much of which go to China. Due to the lockdowns in China as well as the border closures, in the first five months of this year Mongolian coal exports sunk to 6.2mn tonnes, compared with 15mn tonnes in the same period of last year.

Coal gains were in fact a key driver for mineral resource-rich Mongolia in finding itself on a good economic trajectory last year—one big factor here was the internationally agreed sanctions against nuclear rogue state North Korea that forced China to switch to other suppliers of coal to replace what it was buying from Pyongyang. But the COVID-19 blow to coal exports has now caused government budget revenues to drop, while the social insurance fund has started to suffer an imbalance due to increased unemployment.

Mongolia must this year pay back at least $2.4bn in foreign debt which Ulaanbaatar borrowed in 2012 at a point when the country was enjoying higher commodity prices.

Another burden the MPP must address is the country’s grey-list Financial Action Task Force (FATF) status. Mongolia is not seen by the global watchdog as having brought in enough banking sector measures to prevent money laundering.

Mongolia’s GDP dropped by more than 10% during this year’s first quarter, following an estimated 4.8% expansion of economic output last year. The World Bank expects a contraction of 0.5% this year.

Even before the coronavirus came along, growth was faltering in Mongolia. As it turns out, the pandemic scare might have helped the MPP push aside this issue from public attention during the election campaign.  Compared to many other countries, the health and economic crisis cash handouts given to citizens were minimal, but right from the beginning of this year the government was planning to waive pension loan debts for the elderly and promised to give Mongolian tughrik (MNT) 1mn ($355) next year to those without any loans. The public was viewing this negatively, while the IMF even condemned it, but when the pandemic hit the handouts were no longer seen as bad, and the government then also announced it would waive the salary tax and award MNT100,000 per child from May. Not that these relief efforts will keep all businesses afloat. It’s all too clear many local restaurants and shops have closed their doors.

Rough patches only for Oyu Tolgoi

Mongolia’s biggest mining endeavour, the gold and copper Oyu Tolgoi project in the Gobi Desert, went through some rough patches as the pandemic encroached, but in the end it appears that production was not infringed. If Sumiyabazar Dolgorsuren keeps his position as the mining and heavy industry minister that might prove good for Oyu Tolgoi as he has been relatively favourably disposed towards the project. But there is strong pressure in the MPP to exert pressure on the Rio Tinto mine investors for a better deal, with the existing agreement on the venture, struck in 2012, deemed unfavourable for the country.

“It seems certain that the current government will not change its mining policies,” said Ariuntuya Nominkhuu, executive director of the Council for Sustainable Development and Social Responsibility. “The policy of the last four years will continue. Government involvement is quite high in the sector. In fact, the complete collapse of the geology and exploration sectors is due to the MPP's policy,” she added.

The MPP explains its approach as aimed at stopping illegal activities such as licence trading, but it is unclear when the sector's policy will be streamlined and developed. Few licences means very little investment from outside countries.

For those looking for claims of jiggery-pokery in how the election was conducted, note that prior to the election, the MPP revised electoral law, allowing 52 mandates for rural areas but only 24 mandates for the capital Ulaanbaatar, where half of the population lives. The MPP enjoys more popularity among the rural areas’ herder populations. That pretty well explains the division of mandates. Plus, the MPP allocated cash handouts to the herders in the name of subsidising those hit by the cashmere price plunge.

The new State Great Khural and its incoming government ministers have enormous responsibilities ahead. They absolutely must get a grip on the global and local economic challenges stemming from COVID-19. At the same time, they need to shape the new government in accordance with amendments to the Constitution that have recently come into force. If done well, the new constitutional amendments will allow ministers to formulate longlasting, rewarding relations with other nations in trade and investment.

Great scepticism most certainly meets the MPP’s rhetorical promises to pull all citizens out of poverty, but the government is under pressure to find a way to boost the economy to the benefit of ordinary people rather quickly.

Turkish lira finds another all-time low with Erdogan’s Caucasus adventurism no help at all
TURKEY INSIGHT: Mystery on the bourse as traders ask "Who bought the banks?"
TURKEY INSIGHT: Follow the (hot) money