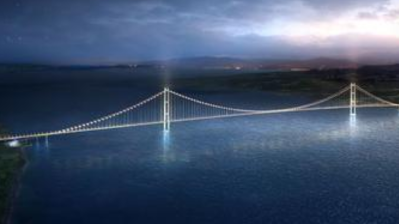 A rendering of the Canakkale 1915 Bridge.
By bne IntelIiNews September 7, 2020

Construction of two 318m-high towers has been completed on the 1915 Canakkale Bridge in Turkey, set to be the longest suspension bridge in the world with a main span of 2,023m, New Civil Engineer reported on September 7.

The $1.3bn bridge, also known as the Canakkale Strait Bridge, is being constructed in Canakkale Province, northwestern Turkey. Located just south of the towns of Lapseki and Gelibolu, it will span the Dardanelles strait, about 10 km south of the Sea of Marmara.

The bridge was designed by Cowi and the construction is the responsibility of a joint venture between Daelim, Limak, SK and Yapi Merkezi.

The deck of the bridge will be at 72m high with a total width of 45m and a maximum thickness of 3.5m. It will carry six motorway lanes (three in each direction), together with two walkways on each side for maintenance.

Construction on the project started in March 2017. The bridge opening is scheduled for March 2022.

The bridge is the centrepiece of the 321-km (199-mile) long $2.8bn Kinali-Balikesir- Motorway. It will connect the O-3 and O-7 motorways in East Thrace to the O-5 motorway in Anatolia.

Istanbul Municipality receives approval to sell up to €554mn of eurobonds

The Capital Markets Board of Turkey (SPK) has approved Istanbul Municipality’s application to sell up to €554mn of eurobonds, the SPK said on October 22 in its weekly ... more

Turkey has already been hit hard by climate change and faces huge financial losses from it in the future, according to Murat Turkes, a member of the board at the Center for Climate Change and Policy ... more