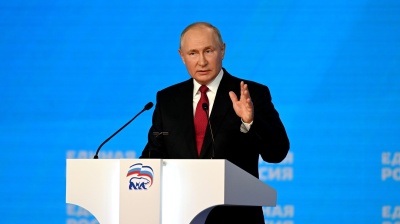 Confusion is reigning amongst analysts and energy traders over why Russian President Vladimir Putin has ordered gas export deals to all be settled in rubles on March 23. The main problem is that the rule means Russia will cut itself off from one of its biggest hard currency earners at a time when it is desperate for dollars and euros.

Europe is Russia’s biggest market for gas exports and earns some $30bn-$40bn a year. According to the IEA, in 2021 the EU imported 155bn cubic metres of Russian gas (including LNG). While Russia accounts for around 40% of Europe’s gas imports, Europe accounts for 70% of Russia’s gas exports. And after the West froze half of Russia’s central bank reserves, some $300bn, Russia is short of foreign exchange.

Putin announced at a government meeting this week that "in the shortest possible time" payments for Russian gas for countries recognised as "unfriendly" should be converted into rubles. “The collective West, by freezing Russian reserves, declared a default on Russia and drew a line under the reliability of its currencies,” Putin said explaining his decision.

The list of "unfriendly countries" includes four of the five largest gas importers: Germany, Italy, Austria and France. According to RBC, “unfriendly countries” accounted for $43bn out of $54.2bn of piped gas sales by Gazprom in 2021.

The announcement sent gas prices jumping by 8.7% to $1,400 per thousand cubic metres on the news, while the ruble rapidly firmed against the dollar to RUB95 – a level it has not seen since before the Ukraine war started on February 24.

But what does Russia gain? One trivial explanation is that if the West can sanction and seize Russia’s dollars and euros it will just simply stop using them, but that is too simple an answer.

Elina Ribakova, deputy chief economist with the Institute of International Finance (IIF), pointed out that if Gazprom now has to collect all its payments in rubles for its European clients then the current 80% of foreign currency surrender requirement imposed by the CBR effectively becomes 100%, as Gazprom will earn no foreign exchange in these deals.

The onus of buying rubles to pay for Russian gas will fall on the European customers, but it is not clear where they will be able to raise $40bn worth of rubles a year to cover their gas bills. The market took Putin's proposal as a way of supporting the ruble, economists say that the change will not affect the make up of the current account: it makes no difference if Gazprom receives dollars and then sells them on the Moscow Exchange of if foreign governments sell dollars on the Moscow Exchange in order to pay Gazprom in rubles. The amount of dollars flowing into the CBR coffers remains the same.

Another motive may be to force Gazprom to convert 100% of its foreign exchange earnings to rubles, but it would be far simpler for the CBR to lift the bar from 80% to 100% if that were the motive.

Economists interviewed by RBC say that changing the terms of payment and switching to the ruble will have no impact on the ruble exchange rate. The role of the euro and the dollar in world trade will also not change, and Russia is unlikely to receive any economic benefits from the switch.

The change does, however, bring some serious risks for Gazprom. The first is that its international contracts are all denominated in international currencies.

Gazprom's Eurobond prospectus dated January 27 says 58% of natural gas sales to Europe were made in euros, 39% in dollars, and up to 3% in pounds sterling. After 2014, Gazprom began to include in new contracts an option for payments for Russian gas not only in euros and dollars, but also in rubles.

The governments of Serbia, Moldova and Bulgaria have confirmed that their contracts are already designed for payments in rubles and there will be no problems with payment. The Bulgarian authorities have declared that they are ready for such calculations.

However, if Gazprom tries to unilaterally change the currency then it opens itself up to a breach of contract claim. If Gazprom claims “significant changes in the market”, which often is a cause in a contract to renegotiate the terms, then all the terms in the contract are up for re-negotiation, including the volumes and the term of the contract: both can be reduced, especially in the current climate. The Institute of Energy and Finance also noted an attempt to change the terms can also be used as ground to end the agreement prematurely. Alternatively Gazprom could find itself back under the Stockholm Arbitration, which earlier ruled that it pay $2.8bn to Ukraine for contract irregularities.

The head of the German industry association Zukunft Gas said that Putin's statement had caught the gas industry unawares and thrown the German gas industry "in bewilderment", reports The Bell. The German economic minister has also already called the proposal “a violation of contracts.” The head of the Austrian OMV said that his company will continue to pay for Russian gas in euros, because "there is no other contractual basis." Poland has already said it will not comply if it is asked to switch to ruble payments.

So is there any sense in Putin’s proposal? The one place where the change of currencies could make sense is to protect Russia’s gas exports from even more even harsher sanctions.

Former US Ambassador to Russia Michael McFaul has been suggesting recently that an Iran-like sanction be imposed on Russia’s energy exports where the revenue is paid into special escrow accounts and Russia only has access to this money to pay for things like food and essential medicines.

Experts interviewed by RBC also say the ruble might be an attempt to force Europe to “internationalise the ruble.” If the responsibility of converting dollars to rubles moves from Gazprom to a wide variety of international companies then they will all have to set up ruble desks. At the same time, this would also encourage in the international banks to stay in Moscow to service this business worth tens of billions of dollars.

For the moment the motivation for the rule and if or how it will actually be implemented remains something of a mystery. Putin gave Gazprom and the CBR the instruction to come up with the details of a workable scheme.

Russian budget deficit soars in January, full year deficit could double to over 6% of GDP
IMF issues Russian economic growth outlook that is more optimistic than Bank of Russia's
Poland’s economy expands 4.9% in 2022

Kazakhstan: Swathes of land confiscated from Nazarbayev’s brother ahead of vote

De-Nazarbayevification is a useful electoral strategy, which may explain why the news was announced by Kazakhstan’s ruling party ahead of polls next month.

The oil market took a double shock on December 5 when an EU ban on importing Russian oil and an oil price cap scheme were introduced simultaneously. That was followed by a product ban on February 5. The jury is still out on if these will work.

Thousands with homes reduced to rubble left stranded in the open in heavy snowfall and subzero temperatures.

The International Monetary Fund has released one of the most optimistic forecasts for Russia’s economic growth for 2023, predicting 0.3% for this year. The reason? Oil exports will defy sanctions.

Kazakhstan: Swathes of land confiscated from Nazarbayev’s brother ahead of vote
3 hours ago
Jury still out on the effectiveness of the oil price cap scheme on Russian exports
6 hours ago
Turkey numb with shock as fears grow death toll from two giant earthquakes could climb past 20,000
11 hours ago
IMF issues Russian economic growth outlook that is more optimistic than Bank of Russia's
1 day ago
INTERVIEW: Helen Rodwell, head of CMS’ corporate practice in CEE
2 days ago