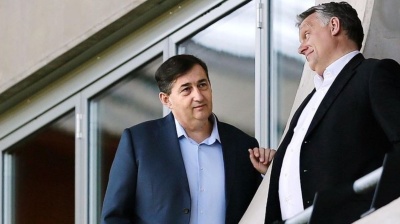 The cabinet of Viktor Orban introduced the corporate tax benefit scheme in 2011, which allows tax deductions for companies which sponsor sports clubs. The scheme was later extended to cultural institutions but was scrapped last year as news surfaced about mismanagement of funds at a few institutions.

Irregularities were also reported on the use of TAO funds for sports clubs, which are supposed to help academies and youth clubs. Amateur clubs are also allowed to request funding. Local media reported recently that division one clubs used proceeds to pay wages.

The Hungarian prime minister's passion for football is legendary. He regularly attends Hungarian league football games, and he had not missed a World Cup or Champions League final since 1998, when he first came into power. In his home village with a population of 1,700, a stadium with a capacity of 3,500 was built next to his home.

Since the launch of the scheme more than HUF500bn went to sports clubs. The football academy operating in Felcsut, founded by Orban and former mayor Lorinc Meszaros, has been a major beneficiary of the programme, although the 2019 donations were the lowest since 2013.

The Puskas Academy received HUF26.5bn in TAO funding in eight years, which was complemented by another HUF22.5bn in donations by companies. These include the biggest firms, such as OTP, MOL or construction firm Kozgep, which has grown to become one of the largest through state contracts.

Critics acknowledge the positive impacts of the corporate sponsorship, but add that it also makes way for corruption as companies helping Orban's favourite club can expect something in exchange for their support.

Belgian commissioner presses for continuation of Article 7 procedure against Hungary

European Commissioner for Justice Didier Reynders called for the Article 7 procedure against Hungary to be continued when Croatia takes the revolving presidency of the Council of the EU in January to ... more

Hungary is ready to start talks on joining the Eurasian Development Bank (EDB) as a full member, Finance Minister Mihaly Varga said at a conference in Moscow on November 29. Joining the EDB would ... more

A Hungarian investor has taken over Neckermann Magyarorszag, the Hungarian unit of bankrupt UK travel company Thomas Cook, local media reported on November 28. No details were revealed on the ... more