COMMENT: Once I lived the life of a millionaire…

No, the title of this column is not the first line of the autobiography of an erstwhile emerging markets investor – although it could be. Somebody who invested $1mn in emerging markets equities in May 2011 would have only owned, roughly, $640,000 by the end of September (based on the MSCI Emerging Markets Index). Certainly nothing to cheer about. In fact, the column’s title comes from the blues standard “Nobody loves you, when you are down and out” – popularized by the great Bessie Smith in the 1920s – which perfectly summarizes the sentiment towards emerging markets in recent months, if not years.

Even more depressing: while EM equities, supposedly a play on growth and convergence, declined for four years in a row, developed equities soared by 40% (S&P 500) and 20% (Euro Stoxx 600, in euro), respectively, over the same period. $1mn invested in May 2011 across developed markets equities would have grown to about $1.13mn (not counting dividends) by October.

In the second half of August, the MSCI Emerging Markets Index hit bottom – for the time being. Since then, it gained in dollar terms 11.5% to October 16. Not spectacular, but significant enough to re-examine the investment case for EM equities, particularly because the rebound was accompanied by an improvement in a number of other indicators usually associated with a “risk-on” scenario, in which investor appetite for risk assets grows. The dollar weakened, oil and copper bounced, and the S&P 500 as well as Euro Stoxx 50 volatility indicators dropped sharply.

Swings in investor sentiment are often hard to understand at the time they take place. One factor triggering the change could have been China’s devaluation in mid-August. Initially it was seen as a confirmation of China’s growth problems and, therefore, accelerated the drop in risky assets, including EM equities. However, soon afterwards investors realized that previous concerns were likely overdone, and they also started interpreting the currency move as a sign that Chinese authorities would not accept a massive slowdown in economic growth without attempts of counteracting.

My expectation (expressed in this bneIntelliNews column) of a better second half-year for Central European equity markets (Poland, Czech Republic, Hungary) has not materialized, so far, in light of the generally poor third quarter for equities. However, within the EM universe, Central European markets proved to be more resilient to global turbulences than their peers (see chart), in line with the thinking in the previous column. 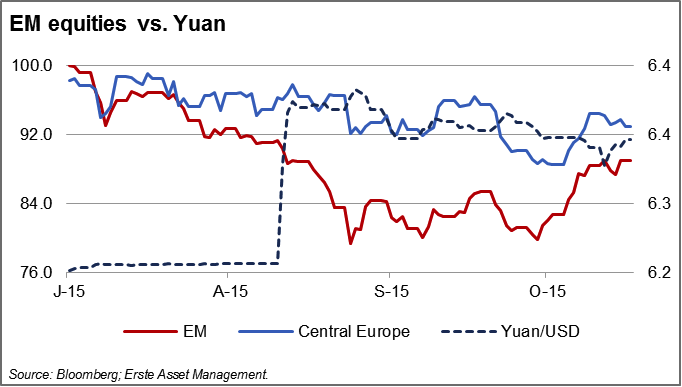 The recent rebound was also supported by the fact that in August the slide in earnings estimates for the EM corporate sector slowed and finally turned upwards. 2015 earnings will still decline (the third year in a row), but based on consensus estimates growth in 2016 could reach 12%. Together with a current valuation discount of 28% to developed markets against a long-term average of 21%, the earnings momentum will likely remain supportive. 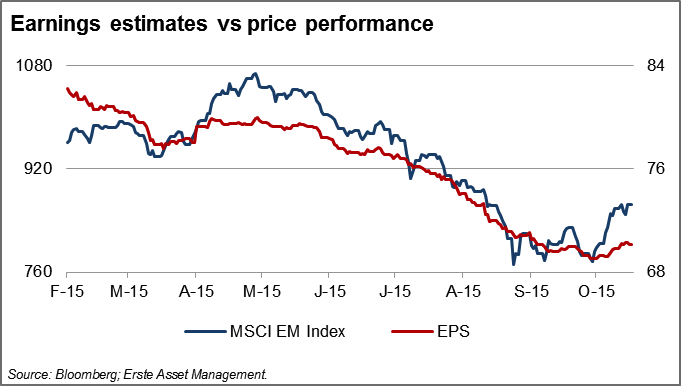 Likewise, the reluctance of the US central bank to start raising interest rates in September was perceived by many investors as supportive for EM assets. However, as far as equities are concerned, it is not clear whether the relief about the Federal Reserve’s inaction was appropriate. As low interest rates are the consequence of feeble US or even global growth, EM equity investors should in fact be concerned about the lack of upward pressure on interest rates.

Two more factors creating upside risk were brought up recently. First, the possibility of another round of quantitative easing in 2016 in Europe and the US in response to sluggish European growth and recession risks in the US. However, it is not clear how this would help EM equities, because the growth shock preceding further monetary easing would likely dominate the liquidity impact. Second, and more beneficial for EM assets in the near term, would be further stimulus measures, particularly of the fiscal kind, in China. They would not only support demand for commodities, but also alleviate general China-related fears that, according to recent surveys, are the main risk factor weighing on investor sentiment.

Overall, however, it still is unlikely that the current uptick in EM assets will turn into anything closely resembling the EM bull market of the early noughties or the massive rebound from 2009 to 2011. It may last another two weeks or two months – nobody can tell – but “a return to robust and synchronized global expansion remains elusive”, as the IMF pointed out in its recent World Economic Outlook (Page xiii), and commodity markets will remain weak. Two of the key ingredients for a revival of the EM investment case, therefore, will be missing for the time being. EM investors, it seems, need to wait some more time before they can return to live a millionaire’s life.