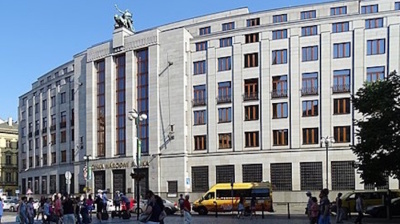 Inflationary pressures are easing allowing CEE central banks to take their foot off the brake and slow their tightening cycles. / wiki
By bne IntelliNews August 8, 2022

The tightening cycle by central banks in Emerging Europe is coming to an end as regulators across the region start to get inflationary pressures under control, Capital Economics said in a note on August 8.

As bne IntelliNews has reported, the threat of stagflation surged as prices around the world surged, driven by rising food prices and supply chain disruptions caused by the pandemic. Slow to react, central banks launched their tightening cycles late and have been scrambling all year to catch up.

However, Central Europe central banks have been imposing big hikes in recent months and it appears that that is starting to bear fruit.

While [Developed Markets] central banks are currently raising interest rates in earnest, the past week has brought signs that tightening cycles are now nearing an end in parts of the emerging world,” said William Jackson chief emerging markets economist with Capital Economics in a note. “Indeed, with interest rates now well above neutral in much of Emerging Europe and Latin America, policymakers in most countries in these regions will probably ease off the brakes by October. Within Asia, low inflation has allowed policymakers to start tightening later and cycles will end later too, with rates at much lower levels.”

Runaway inflation left many countries with negative real interest rates as bne IntelliNews illustrated with a series of dynamic charts, which is the precursor to stagflation, but now those rates are returning to neutral.

The National Bank of Ukraine (NBU) was the first central bank to ring the alarm bell with rate hikes in 2021, quickly followed by the Central Bank of Russia (CBR) only a few days later. Since then both banks have put through a series of triple digit basis point hikes. While inflation continues to climb in Ukraine and is currently 21%, the CBR’s actions saw inflation peak in April, and it is now the only country in Europe where inflation is falling. It is also the only central bank in Europe that is easing its monetary policy with four cuts from the emergency 20% the bank imposed a few days after the war started in Ukraine in February to the current 8%.

“That partly reflected the new-look and much more dovish composition of the National Bank’s board,” says Jackson. “But similar things are happening elsewhere. For instance, Brazil’s central bank signalled that there’s room for only one more small hike when it raised rates on [on August 10].

Things are not going so well in Hungary that has been forced to push through a number of extreme and off-agenda hikes to try and halt runaway inflation and shore up the florin that has been in free fall.

But the pace of rate hikes in Poland has also slowed after the National Bank of Poland (NBP) increased its reference rate by 50bp to 6.5% on July 7, below market expectations for a hike of 75bp.

“In short, we’re getting the first signs now that rate hikes are coming to an end in parts of the emerging world. Several factors tie together the central banks that have finished their cycles or are close to doing so,” says Jackson.

First, tightening cycles in these countries have already been underway for a long time, Jackson says. The Czech central bank started to raise interest rates in June last year following the Ukraine and Russia and others followed soon after as the seriousness of the problem became more apparent.

In Czechia and Russia, the nominal policy interest rate is around twice its estimated neutral level, and in Ukraine far above that due to the special circumstances of the war.

A third factor is that fear of a global recession has rapidly overtaken concerns about high inflation. The leading International Financial Institutions (IFIs) such as the World Bank have slashed their growth outlook several times this year already as a global recession looks increasingly likely, which will alleviate price pressure without the need to hike rates. As the inflation pressure is caused by food and supply problems, rather than money supply dynamics, interest rate hikes have a limited utility, but cutting rates should support growth.

“That partly reflects the deteriorating global environment but also that high domestic interest rates will weigh on activity. In one sign of this, both the Czech and Brazilian central banks last week put an emphasis on inflation projections over a longer time horizon than usual – when inflation will be lower. That hints at an increasing willingness to look through above-target inflation over the near term,” says Jackson.

The partial mobilisation announced on September 21 by Russian leader Vladimir Putin has caused an unprecedented exodus of the Russian male population eligible for the draft. But do they support him and can they cross into the EU?

ING: Eurozone PMI suggests the region may already be in recession

The third decline in a row for the eurozone PMI indicates that business activity has been contracting throughout the quarter. This confirms our view that a recession could have already started.

ING: Energy price caps are appealing, but are not without risks

On 14 September 2022, Ursula von der Leyen, President of the European Commission, announced in her State of the Union speech a set of proposals to mitigate the impact of high energy prices.

Russian men fleeing the draft are caught between suspected of being pro-Putin and Western closed-door policies
3 days ago
Sanctioned Russian diamonds are reaching the US consumer, but some are getting there legally – for now
4 days ago
EBRD: Reduced gas supplies and inflation to slow growth further in EBRD regions
4 days ago
ING: Eurozone PMI suggests the region may already be in recession
6 days ago
ING: Energy price caps are appealing, but are not without risks
11 days ago