History, they say, does not repeat itself – it rhymes. Even if this were true, history’s rhymes are clunky at best. While Russia's current crisis has obvious parallels with the turmoil in 2008, such as the drop in oil prices, there are significant differences. This suggests the recovery that will eventually set in will play out differently to what happened in the aftermath of 2008.

The following series of charts shows how key variables evolved during the 2008 crisis and the current crisis. The starting point in each case is the date when the oil price peaked pre-crisis. In 2008 Brent peaked on July 3 at $146 per barrel, and in 2014 oil had its temporary high on June 19 at $115, around the time when Ali al-Naimi, the Saudi oil minister, declared: “The customer is happy, the producer is happy, the consumer is happy, the market is in balance, everything is good”.

The oil price is all that matters for Russia, as Chris Weafer recently stated. Thus the first chart focuses on the main culprit – the drop in oil prices. From this perspective both crises were fairly similar. In 2008 Brent dropped 77% in less than six months, went sideways for a short while, and then more than tripled over the following nine quarters. In comparison, the current downturn has been less steep, with oil losing 'just' 60% since June 2014. However, the slump seems more resilient than in 2008. Back then, the main cause was weak demand due to a global downturn. This time supply factors are playing a main role reflecting the immense success of US shale oil production in recent years. It seems we are entering an extended period of lower oil prices (below $100 per barrel), although at current prices shale production is suffering and we will likely see a tighter market in the second half of this year. The bottom line, however, is that the oil price recovery will provide less support for the Russian economy than in the aftermath of the previous crisis. 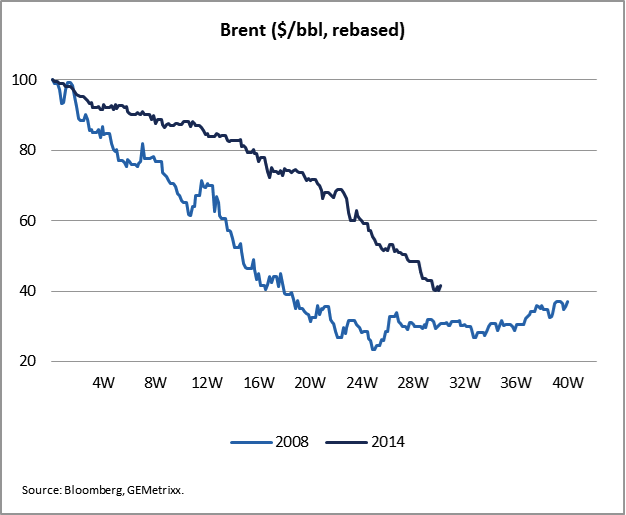 To what extent weak demand or additional supply contributed to falling oil prices is still being debated in the international blogosphere (see here, here and here). The price performance of industrial metals suggests that the specifics of the oil market are playing a bigger role. While in 2008 industrial metals broadly moved in sync with oil, this time the drop in metal prices was muted relative to oil, even considering the correction of metals in recent days. True, iron ore (which is not among industrial metals) has been hit even harder than oil in 2014, but copper, nickel, aluminum and zinc weakened much less than crude oil. Since miners are heavy users of diesel and energy in general, they have benefited from recent price trends, which explains the massive outperformance of the RTS Metals Index relative to the broader RTS (-14% vs -44%). 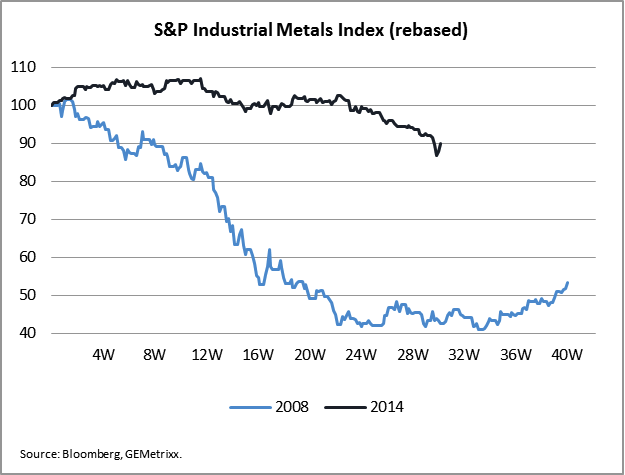 Another key difference between 2008 and 2014 is the performance of the Russian currency. The ruble weakened massively during both occasions, and at the beginning of each crisis at a similar pace. This time, however, the devaluation is going further than in 2008, despite the fact that in 2013-2014, even before the oil rout started, the ruble had been trending lower. Six months into the crisis, the ruble is down almost 50% against the dollar, whereas in 2008-2009 the devaluation was 36%.

The ruble’s stronger devaluation in 2014 has three reasons: First, this time the Russian economy – on top of being hit by falling crude prices – is also suffering from Ukraine-related sanctions, which according to Ken Rogoff “might be described as a lucky punch”, because their negative impact was multiplied by the simultaneous fall in crude prices. Second, the ruble was probably overvalued before the oil impact set in. Over the past five years, from mid-2009 to mid-2014, the real ruble exchange strengthened by about 15%. Third, and most importantly, the Central bank of Russia (CBR) has moved towards a floating exchange rate regime in an effort to protect currency reserves and support the fiscal budget. Of course, with oil prices 50% down and domestic rates in the high teens, Russia’s economy will not escape a severe recession in 2015, but due to the weak ruble the chance is high that the downturn will be milder than in 2008, when the economy shrank by 7.8%. 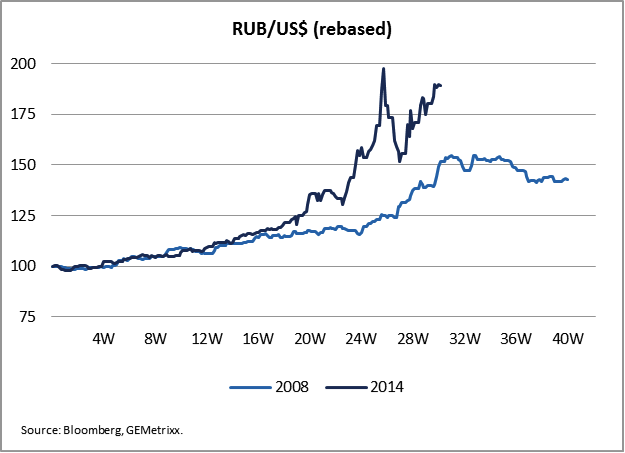 Stock prices retreated massively both in 2008 and again during the current crisis. The collapse was more pronounced in 2008, when the (dollar-based) RTS lost 80% from the peak to the bottom, while during the recent turmoil the index ‘only’ lost 56%, reaching its bottom on December 16, when the CBR surprised the investors with a 6.5-percentage-point interest rate hike to 17%. However, the market’s smaller loss this time needs to be put into perspective. Back in 2008 the Russian stock market collapsed after a bull run of four years, with stocks trading on average on 9.1x forward earnings (a 18% discount to the MSCI Emerging Markets index) at the time. In contrast, the current correction started following three years of mediocre performance, with the market trading on a forward price/earnings ratio of just 5.2x, a discount of 55% to its EM peers, in mid-2014. 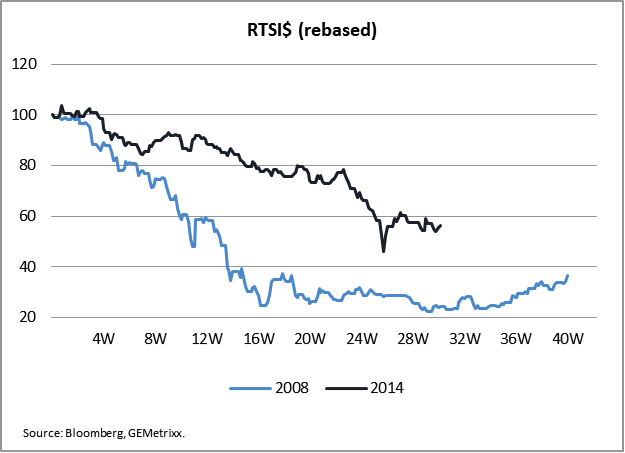 A remarkable difference between the market’s performance in 2008 and 2014 is that this time the fall in dollar-based stock indices solely was due to the ruble's devaluation. The (ruble-based) Micex, the main local index, moved more or less sideways despite oil’s weakness, ruble volatility and sanctions. By mid-January, the Micex index was even above its June 2014 level, partly reflecting the fact that the stronger ruble devaluation is not only benefitting the fiscal balance, but also supports corporate profitability in ruble terms. 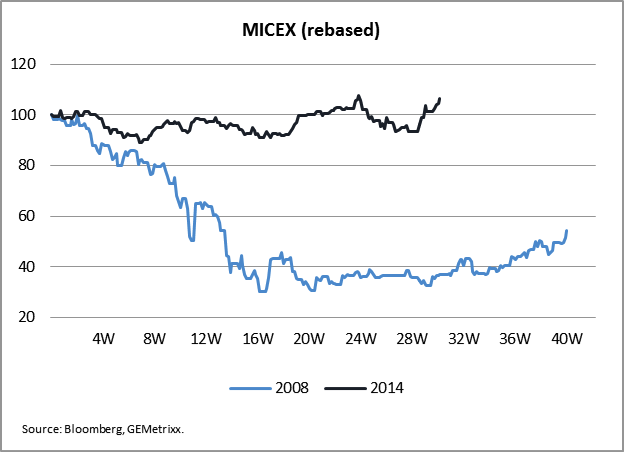 What the comparison between 2008 and 2014 is not telling us, naturally, is when crude prices, the ruble and Russian equities will rebound. The technically minded, when looking at the charts, will draw some hope from the fact that in 2008 commodity prices and markets stabilized five-six months after the turmoil started, and strongly rebounded back soon after. But going back to the beginning of this comment: history does not repeat itself, and its rhyme is far from perfect.