COLCHIS: Media Sustainability in Eurasia: What does the Data Say? 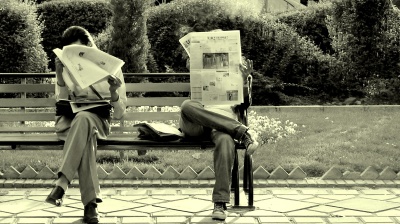 Southeast Europe has a vibrant press but Keshif MSI index shows standards are slipping
By Ashwed Patil of Keshif April 25, 2019

Southeast Europe enjoys a diverse and vibrant media sector, but an analysis by data consultancy Keshif shows that the press is coming under pressure and diversity and quality may be slipping.

A vibrant and free media sector is critical for the people to access information about the state of public affairs and holding institutions accountable for transparency and governance. However, media environments also come under attack from institutions by means of censorship, cracking down on free speech, taking legal actions against journalists and whistle-blowers and disrupting media markets. A free and independent media sector requires sustainable environments  to foster and grow, as it strives to provide objective and timely news to citizens from multiple perspectives without any legal, social, or financial obstacles.

The state of media environments across Europe and Eurasia is highly dynamic, with progression and regression intermixed across borders and themes. To assess the viability and strength of the media sector in Europe and Eurasia, our team at Keshif utilized our company’s unique data visualization platform to analyse the International Research and Exchange Board’s (IREX) Media Sustainability Index, which has provided reliable evaluations on the conditions of independent media in over twenty countries across Europe and Eurasia since 2000.

MSI’s indicator data are gathered and assessed by a panel of experts in each country, providing information across five key objectives: supporting institutions; plurality of news; freedom of speech; professional journalism; and business management. (More details on the methodology are on the IREX MSI website.)

The resulting scores are captured on a 0-to-4 scale—four reflecting optimal media sustainability—and matched to four sustainability categories per each point.

In 2018, countries in Southeast Europe scored well in overall sustainability with highly independent and free media sectors, with Kosovo, Albania, and Montenegro taking the top three spots in ranking. In the meantime, Central Asian countries fared poorly, with three of them, Turkmenistan, Uzbekistan, and Kazakhstan, appearing among the lowest-ranking five countries.

MSI scores for five indicators across all 21 countries in Europe and Eurasia: media enterprises in most of the countries haven’t been efficiently managed but they have strong institutional support and most of them continue to provide diverse information to the public

Sustaining independent operations is a struggle for media sectors across Europe and Eurasia. In 2018, Business management is the weakest dimension with only 3 out of 21 countries (Kosovo, Montenegro and Romania) achieving nearly sustainable business environments, with the indicator scores above 2.

On the other hand, the plurality of news and supporting institutions indicators show that more than half of the countries achieved the near sustainability in these dimensions. This factor ensures citizens have access to reliable and objective news from a diverse range of sources, and that the professional interests of media sector were potentially supported by trade unions and professional associations. 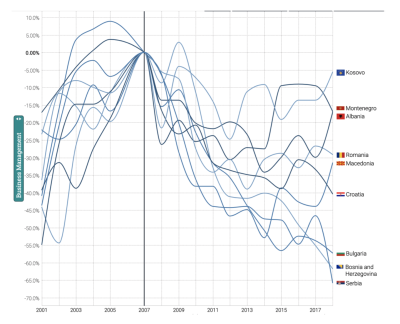 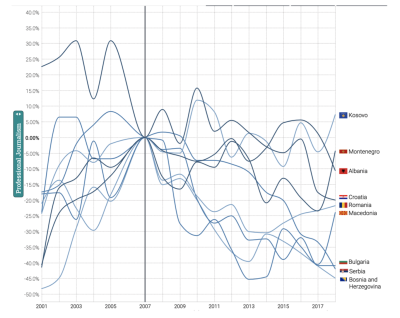 Trends of change Southeast Europe’s media sustainability since 2007: media outlets have struggled to sustain financially and this has impacted their editorial independence and reporting quality.

Decreasing advertising revenues, deteriorating market conditions after the 2008 financial crisis and lack of business planning for media sectors has been a particular point of concern for countries in Southeast Europe, a region usually associated with having highly transparent media environments.

Experts have noted that the shifting conditions have led to media companies becoming more dependent on their owners with potential political and business interests, and the government interference has increased through state subsidies and advertising contracts.

The indicator data corroborates this observation: from 2007 to 2018, business management scores of Southeast European countries have declined at various levels. The Professional journalism indicator also shows that all countries (with Kosovo being the exception) saw their scores decline after 2007. The negative impact of the direct political interference and financial pressure on editorial policies and journalism ethics is clear in environments fostering self-censorship, unfair reporting, and sensationalism.

With deteriorating media sustainability, Serbia has been a country of serious concern in Europe. The country’s overall score dropped a full point from 2003 to 2018 (on a four-point scale), and every single dimension deteriorated.

The biggest worries and the sharpest declines are Serbia’s business management, professional journalism, and plurality of news factors. A striking loss of capacity appears for its plurality of news, moving from top-ranking position in 2003 with a score of 3.10, to a dismal score of 1.47 in 2018. 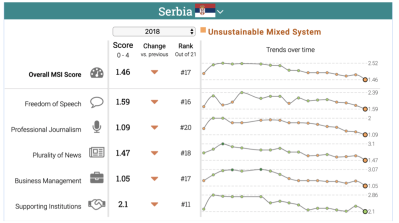 Serbia’s MSI score has declined rapidly in the last few years, with major downward shifts in all of its MSI dimensions

The 2018 MSI report for Serbia states that factors contributing towards the country’s declining media space include increased restrictions on freedom of speech, lack of funding, poor editorial policies and the rapid spread of fake news through online media.

Birds of a Feather

Being neighbours, or having political or similar operating environment, appear to lead countries down similar paths. Our analysis revealed three groups of European countries with major similarities in their overall media sustainability trends over time.

Group A—Albania, Kosovo, Moldova, and Armenia: These countries generally improved steadily, with no major downturns over an 18 year period. Despite their geographical separations, they started, and ended, on very similar overall scores characterized by broadly sustainable media environments. 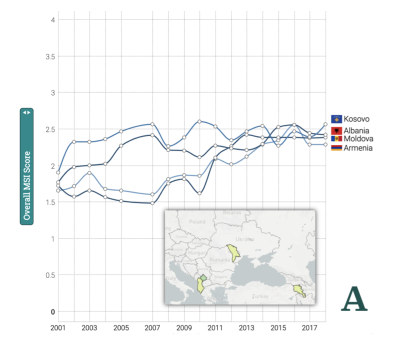 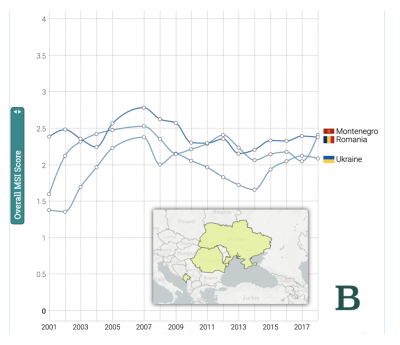 Group C—Bosnia & Herzegovina, Bulgaria, Croatia, Macedonia, and Serbia: The Balkan countries, all bordering one another, were initially assessed as having mid-range MSI scores, improved up until 2007, and then experiences sharp downturns. Some of them, such as Serbia, left off worse than their status in 2000, while others, such as Bosnia and Macedonia, ended in similar situations to where they began. 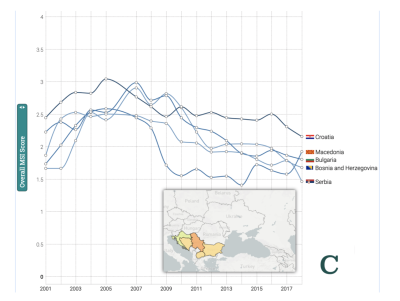 Why do these countries “flock” and not others? This is the advantage of data visualization, which can quickly reveal potential patterns that deserve further examination. The Balkan countries perform similarly and at the same time these Group C features countries also have similar ratings from democracy watchdogs like Freedom House. However, some countries defy easy categorization: sometimes, apparent analytical associations can turn out to be spurious, but it’s impossible to know without knowing where to look.

Media systems across Europe and Eurasia have seen vastly different developments, with media sectors in some countries showing impressive improvements while others face extremely hostile environments to operate. Despite the mounting financial challenges and increased political control, media environments have continued to empower citizens and help improve the quality of governance through democratic mechanisms.

Ashwed Patil is currently an ICT4D Associate at Keshif, a data visualization and analytics consultancy, and a Master's Candidate in Information Science at Indiana University Bloomington, focusing at the intersection of technology and international development.

ING THINK: Growth in the Balkans: from zero to hero again?

FPRI BMB Ukraine: Most Ukrainians are optimistic about 2021 – poll

According to the Rating Group’s first public opinion poll of 2021, just over half of Ukrainians surveyed (52%) believe that the new year will be better than the one before.

The global economy starts 2021 with record amounts of debt that will slow the recovery and could destabilise some countries, the Institute of International Finance warned.

COMMENT: The Manafort Pardon: a finger in the collective eyes of Ukrainians

STOLYPIN: Scope for limited progress under Biden, so long as the past remains the past

Joe Biden seems to be getting the band back together, drawing heavily on veterans of the Obama administration for his foreign policy team. In many ways that is a good thing after four years of erratic decision-making and malign neglect.

ING THINK: Growth in the Balkans: from zero to hero again?
2 days ago
FPRI BMB Ukraine: Most Ukrainians are optimistic about 2021 – poll
3 days ago
COMMENT: Record high debt levels will slow post-coronavirus recovery, threaten some countries' financial stability, says IIF
5 days ago
COMMENT: The Manafort Pardon: a finger in the collective eyes of Ukrainians
10 days ago
STOLYPIN: Scope for limited progress under Biden, so long as the past remains the past
10 days ago