COLCHIS: Georgia is in crisis, but it’s far from the end of democracy 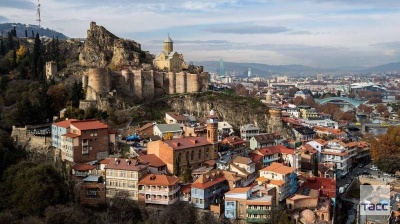 Georgia has been plunged into yet another political crisis after the head of the opposition UNM party Nika Melis was arrested. While the move will tarnish the country's democratic reputation it will not undo its democratic gains
By Alexander Scrivener of the Eurasia Democratic Security Network February 25, 2021

The news from Georgia over the past few days has been depressing. Headlines like, “Georgian opposition leader arrested” and, “opposition HQ stormed” evoke the sort of post-Soviet authoritarianism that Georgia has worked so hard to disassociate itself from.

The United National Movement (UNM) opposition and its loud supporters on social media have been quick to point to the forceful arrest of its chair Nika Melia as evidence that Georgia is slipping towards dictatorship.

This is an exaggeration of the situation. For all its flaws, Georgia’s civil society and media landscape remains relatively diverse and free on regional standards. That is unlikely to change dramatically in the near future. But this prominent arrest is certainly a highly worrying development.

Many of Georgia’s most loyal foreign allies have expressed shock and concern. There has even been a call for targeted sanctions coming from a former US assistant secretary of state .

Whatever the strength of the legal arguments, the storming of UNM’s offices and the arrest of Melia is without doubt a grave political mistake that will come at a significant reputational cost to the country.

Georgia is a country that depends on its image as a relative beacon of democracy for its development and relevance. Unlike Azerbaijan, it does not possess a wealth of natural resources. Unlike Armenia, it does not have a large diaspora lobby to ride to the rescue with money and political backing. And unlike Ukraine, it is a small and insignificant market for Western investors.

The risk is that Georgia will lose its niche as “star pupil” in the region, leaving it isolated. This is potentially disastrous for the country at a time when its status as a crossroads economy is threatened by the new status quo in Nagorno Karabakh, which opens alternative trade routes that circumvent Georgia.

As Estonia’s former president, Toomas Hendrik Ilves, stated on Twitter: “Don't go this route...There are too many people and countries in Europe and the West that would be all too glad to write you off; one less "FSU" country to worry about, feeding all of their self-generated narratives about you being unreformable, hence not worth support”.

It is a warning Georgia’s government would do well to heed.

Aside from the severe diplomatic and reputational cost to Georgia, what makes this move especially puzzling is that it is unclear what domestic benefit the ruling Georgian Dream party gains from arresting Melia in such a theatrically oppressive fashion.

It has only been a few months since Georgian Dream won a convincing victory in parliamentary elections, a result disputed by UNM and other opposition parties who have largely refused to take their seats in parliament.

In this contest, like in pretty much every election since Georgian Dream first came to power in 2012, the ruling party relied on voter fears of the return of the soft authoritarianism that characterised the rule of UNM under former president Mikheil Saakashvili. While it is true that Georgian Dream has had plenty of scandals of its own since 2012, for a significant number of Georgian voters, it has always been able to point at UNM and say “at least we’re not them”.

The events of the past few days and the rhetoric being used by new Prime Minister Irakli Gharibashvili may have jeopardised this appeal. While Gharibashvili has used strong language about UNM before, calling them “terrorists” just before special forces stormed their headquarters, it no longer sounds like the hyperbole that normally characterises Georgian politics. It sounds like an existential threat to democracy itself. And that significantly weakens Georgian Dream’s appeal as a repository for “anyone but Saakashvili” votes.

The UNM on the other hand has been handed an opportunity to rid itself of its authoritarian baggage and recast itself as the oppressed democratic opposition. It is arguably precisely the situation that the UNM wanted to be in. Georgian Dream has handed UNM the gift of political relevance on a plate.

Georgian Dream under Prime Minister Gharibashvili (and presumably his benefactor, billionaire Bidzina Ivanishvili) has decided on a course of action damaging not just to the country, but to their own future prospects domestically. Wiser heads within Georgian Dream can see this. Presumably this is part of the reason that Prime Minister Giorgi Gakharia resigned over the issue and why one of his fellow Georgian Dream predecessors, Giorgi Kvirikashvili, has also stated that he wishes to see Melia released.

A big question that remains is whether Georgian democracy is truly in danger here. And despite UNM’s hyperbolic statements, this crisis, though damaging, is unlikely to strike a fatal blow to Georgia’s democracy.

Georgian Dream is Georgia’s fourth ruling political force since independence. All three of its predecessors lost power when they resorted to authoritarian methods one too many times. Georgia’s democracy may not be as established as those of Western Europe, but Georgians have enjoyed basic political liberties for too long for them to be obliterated with the arrest of one opposition politician. This domestic constraint coupled with the outcry even from loyal allies abroad may well force the government back to the negotiating table with the opposition. At the very least, there is a good chance that these factors will hinder them from resorting to outright political repression. It’s not too late for Gharibashvili to return to the mould of his more technocratic predecessors and focus on governing rather than pursuing revenge against the UNM.

But nothing is guaranteed in Georgian politics. If Gharibashvili continues with his “tough” line on the opposition, the risk is that the crisis could worsen and result in serious unrest. So far, there is no evidence that the partisan anger between the UNM and ruling party is strongly reflected in society. For many ordinary Georgians, economic problems and the Covid-19 pandemic are higher priorities than the latest episode of the Saakashvili and Ivanishvili political soap opera. But if this escalation of the situation continues and wider Georgian society begins to sense that its basic freedoms are in danger that could change very quickly and lead to more widespread unrest.

Alexander Scrivener was a 2019-2020 EDSN fellow and an independent analyst focusing on Georgia, the South Caucasus, and European politics. EDSN is an international research fellowship project of the Center of Social Sciences, Tbilisi, and made possible with the support of the National Endowment for Democracy.

Russian President Vladimir Putin fancies himself as The King of The Swingers but it’s The Simple, Bare Necessities that Russians care about. State of The Nation? It’s a mess.

Legacy and death must linger perennially even in the minds of the most megalomaniacal autocrats, and this is why preparations for Turkmenistan’s future are proceeding apace.

Russia’s military exercises near the Ukrainian border have many analysts looking into Ukraine’s capacity to defend against a full-fledged attack. While Kyiv has invested heavily in modernising its military, it remains seriously outgunned.

Romanians gripped by cryptocurrency euphoria during the pandemic

The euphoria of the 1990s is back as small investors ignore the risks and dream of getting rich overnight.

RIMMER: King of the swingers
38 minutes ago
Turkmenistan: My kingdom for a horse association
10 hours ago
FPRI BMB Ukraine: How well could Ukraine defend itself against a Russian attack?
2 days ago
Romanians gripped by cryptocurrency euphoria during the pandemic
2 days ago
BORDERLEX: EU Commission goes back to the drawing board to revive Turkey trade talks
3 days ago