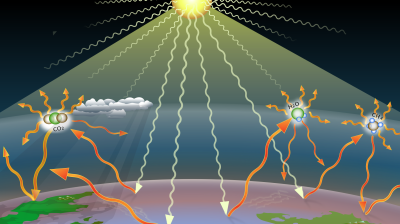 The greenhouse effect of solar radiation on the Earth's surface caused by greenhouse gases.
By bne IntelliNews November 26, 2019

In the annual snapshot, countries are measured for their NDC, namely their Nationally Determined Contribution representing national efforts to reach the Paris Agreement’s long-term temperature goal of limiting warming this century to well below 2°C.

Unep in its report projected that Turkey would attain “Overachievement of the target by more than 15 per cent, suggesting a weak target”.

The report added: “In its Intended Nationally Determined Contribution (INDC), Turkey aims to limit its GHG emissions to 21 per cent below business-as-usual or to 959 MtCO2e per year in 2030 (excluding LULUCF [Land Use, Land-Change and Forestry]).

“Turkey’s current emissions are on this trajectory. The energy sector is at the centre of the country’s low-carbon transition debate, representing more than 85 per cent of its total GHG emissions in 2017, with 40 per cent of all energy sectors emissions resulting from electricity generation.”

In her introduction to the report, Unep executive director Inger Andersen wrote: “The Unep Emissions Gap Report 2019 finds that even if all unconditional Nationally Determined Contributions (NDCs) under the Paris Agreement are implemented, we are still on course for a 3.2°C temperature rise.

“Our collective failure to act strongly and early means that we must now implement deep and urgent cuts. This report tells us that to get in line with the Paris Agreement, emissions must drop 7.6 per cent per year from 2020 to 2030 for the 1.5°C goal and 2.7 per cent per year for the 2°C goal. The size of these annual cuts may seem shocking, particularly for 1.5°C. They may also seem impossible, at least for next year. But we have to try.”

Looking at Turkey’s worrying decision to build up coal-fired energy plant capacity the report observed that “the Government has set an ambitious plan for new coalfired power plants, with purchase guarantees and subsidies to investors.

“Among the G20 members, Turkey ranks third for new coal-fired power plant capacity being planned (37 GW), following China and India (as at January 2019). This is twice as much as Turkey’s current operational capacity. However, planned capacities are not being constructed due to a lack of financing, with around only 1 GW currently under construction. More than 40 GW in planned coal-fired power plant capacity was cancelled over the 2010–2018 period.”

At the start of 2018, noted the report, Turkey put in place an ambitious National Energy Efficiency Action Plan (NEEAP) for the 2017–2023 period, which aims to reduce the its total energy demand (in primary terms) by 14% compared with the 2017 level.

“The six-year plan includes the six sectors that supply and demand energy, covering a comprehensive list of 55 actions. The renewable energy FIT mechanism that will still be available for new projects until the end of 2020 was successful in raising the wind and solar PV share in total electricity demand to 10 per cent (and around a third of the total demand supplied from renewables),” Unep said.

Following the global trend, Turkey is diversifying its energy policy portfolio, the report said, adding: “Since 2017, three rounds of auctions have taken place for onshore wind (twice) and solar PV with favourable prices and local content requirements. The Government has indicated that auctions will be the key mechanism for renewable energy investments in the coming decade.”

Finally, the report section on Turkey took into account that nuclear energy has been on Ankara’s agenda as an alternative energy source for many years. “The country’s first nuclear power plant is planned to have four 1.2 GW reactors, with the first reactor planned to start operation by 2023,” it said.

TURKEY INSIGHT: How long can the Turkey ETF rally last?

The tectonic plates holding together Azerbaijan’s clanocracy are shifting. Economists say a massive restructuring of the economy is needed to benefit ordinary citizens.

Russian President Vladimir Putin called for changes to the constitution that would shift power to the Duma, the Russian parliament, as well as imposing some new limits to the president’s power, during his annual state of the nation speech.