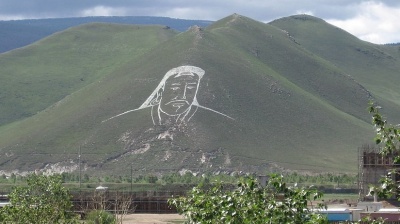 Portrait of Chinggis Khan painted on a Mongolian hillside. The great ruler's name was borrowed for an international bond proving something of a burden for Ulaanbaatar. / bne IntelliNews
By Anand Tumurtogoo in Ulaanbaatar August 18, 2022

When the Economist Intelligence Unit (EIU) recently focused on sovereign debt challenges in Asia, it concluded that Mongolia is one of the emerging markets plainly at risk of a default in the near future. The news that Sri Lanka was defaulting rattled and unnerved some Mongolians as warnings of possible sovereign defaults in Asia frontier markets began to flare up.

Mongolia’s finance minister, Javkhlan Bold, quickly stepped into the picture, reassuring the public via the media that Mongolia was not at risk of defaulting anytime soon.

His talking point was that Mongolia had passed the “most dangerous period” of 2016-2017 when global commodity prices were at an all-time low, putting pressure on the country’s coal exports. “At that time, the debt of the government of Mongolia was 78.8% of GDP, but it was reduced to 55.1% in 2019 and 50.8% in 2021,” noted the minister. However, Bold did not account for the financial burdens brought about by the pandemic and the war in Ukraine, two rude realities that were pivotal points in Sri Lanka’s decline and default.

What’s more—in contrast to 2016-2017, when there weren’t any widespread protests in Mongolia—in 2021, a large group of protesters ventured into the cold to protest against the mishandling of the pandemic, while this year, the streets have seen big youth protests at economic hardship exacerbated by China’s coronavirus border closures and the economic impacts of the Ukraine conflict.

The EIU’s observations included this sobering passage: “Mongolia will be reliant upon new debt inflows in 2022-23 to meet interest payments on external public debt and to compensate for a persistent current-account deficit. Access to sufficient financing is put at risk by high domestic inflation and the possibility of further currency depreciation.

“The Bank of Mongolia (BoM, the central bank) held off a decline in the value of the currency, the togrog [or tughrik], against the US dollar throughout 2021, at the expense of its foreign-exchange reserves. Despite the BoM permitting a correction in February-May, the local currency still appears overvalued on a real effective basis. With inflation in double-digit territory before the recent depreciation, any further decline presents the threat of politically destabilising levels of inflation; large demonstrations have already been staged in the capital, Ulaanbaatar, in April.”

As observed by the EIU, under these conditions, there is a high likelihood that the government will extend additional fiscal relief. “The authorities,” it advised, “are already adding to inflationary pressure and jeopardising the long-term stability of the public finances through an off-budget mortgage-subsidy programme (financed by the central bank) and the redirecting of funds from the Future Heritage Fund (a sovereign wealth fund) to untargeted welfare initiatives. The potential for a loss of investor confidence coinciding with a depletion of foreign-exchange reserves, as commodity prices decline, means that the risk of repayment difficulties from 2024 is high, even with no large principal repayments coming due.”

With Mongolians increasingly jittery over the gathering dark economic clouds, it is a pertinent moment to recap on how, since 2012, Mongolia has issued seven international bonds worth $5.2bn, with all but the first sovereign bond, the Chinggis Bond—named after founder of the Mongol Empire, Chinggis Khaan, or Genghis Khan—used to finance state budget deficits. It’s also a time to once more observe that the Chinggis Bond, the only bond used to finance projects, has been mismanaged. Issued in part to address falling coal exports in 2013, it has not yielded positive results.

The government of Mongolia, it would seem, is counting on old-model approaches to recover the economy, models that Sri Lanka also counted on to restore its economy. Economist Paul Kruger, meanwhile, noted in a New York Times op-ed mistakes made by global economists in using old economic models. Used in the global financial crisis year of 2008, they should, in theory, work. But they do not account for the current situation driven by the pandemic and the invasion of Ukraine; it is misguided to rely on these old models.

Kruger’s sentiments were echoed by Mongolian economist Lakshmi Boojoo. For Lakshmi, the Mongolian government not only faces a different situation, it is also applying strategies that aren’t long-term solutions. The fear is, says Lakshmi, that Mongolia will face a much harsher reality amid the collapse of its economy, just as it did in the 1990s after the USSR, Mongolia’s main economic benefactor, fell apart.

“If we consider our basic situation, we have entered into a very difficult situation: economic growth has slowed down, there is no [economic] diversification, the amount of debt is high, the currency has weakened. To put it bluntly, when the economy is so fragile, I think it would be good to start working together with the IMF and start implementing projects and programmes as soon as possible. The implementation of the IMF programme will bring some control over the budget,” she told Daily Newspaper, a Mongolian publication.

China holds most of the cards

Mongolia's coal exports, so vital to the national economy, have significantly slowed in the past two years in the face of strict Chinese controls on the spread of coronavirus causing border closures. Fortunately, unlike in 2016, coal and demand for other mineral commodities has been at an all-time high. Nonetheless, most of Mongolia’s coal mining companies saw significantly reduced profits and production cutbacks.

When China began to relax its “zero-COVID” policy, coal and other exports began to pick up. But the mining companies were hesitant to rejoice, fearing that Beijing at the first sign of more coronavirus infections would once again move to close border points, triggering further losses.

Mongolia, still very much the frontier market at the mercy of external events. Pictured is the trading floor of the Mongolian Stock Exchange (Credit: Billymse, cc-by-sa 3.0).

Since 2013, Mongolia has drawn nearly $3.7bn in swap agreement loans from China's central bank. As of 2020, it had repaid $1.5bn of the lent capital, while receiving another extension on debt repayment stretching to the end of 2023.

This loan is one of the first Mongolia must repay. Batsuuri Khaltar, an economist, sees the debt as a way for China to gain more control over Mongolia. In her interview, economist Lakshmi also suggested that if China invaded Taiwan, Mongolia’s economy would essentially falter and fall flat. China's Foreign Minister, Wang Yi, recently visited Ulaanbaatar and pledged to assist Mongolia with large infrastructure projects and to keep the border open whenever possible.

In such uncertain times, it seems appropriate for Mongolia to seek economic assistance from China, but it needs to play nice. Wang stated during his visit that Mongolia had demonstrated that it has reaffirmed the "One China" policy and that China was ready to support Mongolian state stability and development.

When Mongolia stood on the verge of a mining boom in the early 2010s, there were predictions of big profits. But they never materialised. With the exception of 2018, Mongolia's annual state budget expenditure has exceeded its income throughout the past decade.

International donors have frequently claimed that Mongolia has not profited from foreign investments due to the mismanagement of funds and a lack of accountability. The merits of the Chinggis Bond, for instance, are now in serious doubt because the debt was used to finance most of the Development Bank of Mongolia's (DBM’s) outrageously voluminous book of non-performing loans (NPLs), which amount to $1.5bn.

Finance minister Bold announced that he would form a working group to investigate all liabilities stemming from the Chinggis paper. Mismanagement and favouritism in the DBM loan selection process was identified by a parliamentary inquiry, but it cannot be said that investigations into the bond over the years have yielded any meaningful and fruitful results. Economist Jargalsaikhan Dambadarjaa has described the probes as merely symbolic.

Mongolia has not been able to fully repay the Chinggis Bond since 2013. Delays in the payment schedule were necessarily introduced on an unpaid billion dollars. Batsuuri concludes that an independent body of economists and researchers would be needed to resolve such acute financial difficulties; without such a body, nothing will change—and that implies that the country will inevitably face an impending default within a few years and perhaps sooner.