CENTRAL ASIA BLOG: Is Turkmenistan about to blow up? 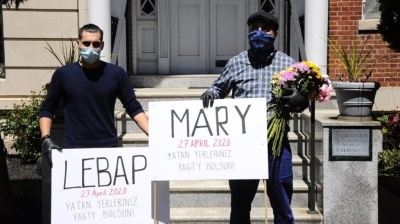 Activists in Washington, DC show their support for protesting residents of Mary and Lebap in Turkmenistan.
By Kanat Shaku in Almaty February 10, 2021

Among the post-Soviet Central Asian countries most poorly equipped to deal with the coronavirus crisis, Turkmenistan takes the gold medal. By now it’s common knowledge that autocrat Gurbanguly Berdimuhamedov’s marble-laden dystopia ludicrously claims to have recorded no coronavirus (COVID-19) cases, even though it mandated mask-wearing and social distancing after an official visit by the World Health Organization (WHO). Also common knowledge to Turkmenistan watchers is that the country was experiencing wrenching food and cash shortages long before the pandemic set in—the situation was then exacerbated by the collapse in global energy prices amid the global health and economic emergency caused by the emergence of the virus and lower 2020 demand for Turkmen gas in China.

The snowball effect has led to the emergence of a handful of rare public protests against the Turkmen authorities both inside and outside of the remote nation’s borders, though some may conclude that they have not been sizable enough to indicate a widespread willingness to challenge the dictatorial regime openly.

Explosion ‘just round the corner’

Nevertheless, a few reports predicting that an explosion is just around the corner have cropped up. These reports have heavily cited the head of the Central Asia programme at the Memorial Human Rights Centre in Moscow, Vitaly Ponomaryev. His interview with the Russia-based Fergana news agency in late October painted a rather pessimistic picture of political stability in Turkmenistan.

Ponomaryev cited a combination of popular anger and new opposition leadership as having the potential to change the population’s docile attitude towards the status quo. The expert viewed the rise in protest activity seen in 2020 among the Turkmen diaspora in Turkey, Russia and the US as capable of forcing the Turkmen government to exercise more caution towards local protesters. He also saw the diaspora’s ability to reach out to people abroad via the internet as a key link between the local and diasporic protesters. Ponomaryov pointed to this as a primary reason behind the relatively mild reaction to protests by the Turkmen government as opposed to the mass arrests of dissidents “that would have been seen” in Turkmenistan in the past—especially under the late president Saparmurat Niyazov, Berdimuhamedov’s predecessor. 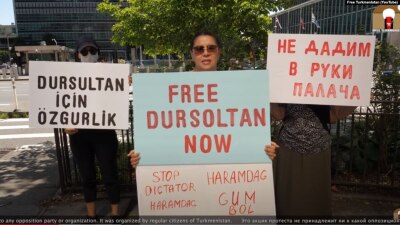 Ponomaryev also sees the rise of leaders among diasporic dissidents, such as Dursoltan Taganova in Turkey, dubbed by some as the “Turkmen Tikhanovskaya”, in reference to the self-exiled Belarusian opposition leader, as another sign of rising potential for anti-regime action.

The wave of Turkmen protests abroad was originally sparked by a rare public rally in Lebap Region on May 13 last year as a reaction to the authorities’ negligence in response to damage caused to settlements by a major windstorm and flood in April. The local government ended the rally by making promises to support the residents and meet their demands.

No physical protests have taken place inside Turkmenistan’s territory since then outside of social media outcries. There were calls for rallies in September, led by opposition groups such as Democratic Choice for Turkmenistan, but these ultimately did not materialise.

While analysts like Ponomaryev have praised the “Turkmen protest movement” as a “new phenomenon”, the lack of meaningful collective outrage among the virus-ridden and starving population inside the country leaves much to be desired. After all, emigre dissent cannot harm the Turkmen leadership directly and pressure from Western human rights groups can be shrugged off when Turkmenistan largely relies on gas exports to China and food imports from Iran to sustain itself. Perhaps it may be too early to project impending doom for Berdimuhamedov’s regime.

No reliable statistics are available on the state of the Turkmen economy, but the harm inflicted by the economic impacts of the pandemic on Turkmen gas exports is no secret. However, some analysts, including Russian economist and Turkmenistan observer Valentin Trapeznikov, offer a counterpoint to visions of a wrecked economy by arguing that the non-hydrocarbon sectors of the Turkmen economy have seen growth in 2020.

“The basis of Turkmenistan's exports is the products of the fuel and energy complex. But in recent years, the volume of supplies to foreign markets of non-commodities [goods] and intermediate goods has increased,” Trapeznikov told Russian news outlet sng.fm.

Trapeznikov noted an annual rise in Turkmen exports of electricity (2.5-fold), fertilizers (up 73.4%), textiles (up 23.1%), iodine (up 27%), soaps and detergents (up 43%) and plastic household goods (up 5-fold) in the first seven months of 2020. The volume of exports without fuel and energy resources in their content rose by 8% y/y last year, he added.

Trapeznikov attributed this growth to the launch of new enterprises and the completion of renovation works at old plants, listing the Garlyk Mining and Processing Plant for the production of potash fertilizers, a gas chemical complex in Kiyanli, a sulfuric acid production plant at the Turkmenabat Chemical Plant and the Turkmenbashi Oil Refinery Complex among examples.

“It is important to note that in 2020 the physical volume and value of exports of gasoline derived from natural gas increased more than 20-fold,” Trapeznikov added.

While there is no way to confirm the numbers cited by Trapeznikov, his claims suggest the Turkmen leadership has not been completely inept at running the show, though they do not amount to a rejection of reports by independent media about a deepening recession and deteriorating food security. China's 20% y/y cut in Turkmen gas imports brought in last April does not paint a reassuring picture, given that China accounts for 90% of Turkmen gas exports altogether.

The neo-Soviet state supposedly even ran out of paper to print government newspapers and magazines—it may still run out of patience from its 6mn citizens next.

Moody’s says Bulgaria, Croatia and Romania have chance to be the main winners from EU’s post-crisis funding