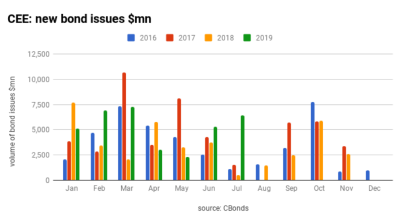 Russian companies issued almost no bonds in July but bond issues in Central Europe were a strong $6.4bn
By Ben Aris in Berlin August 5, 2019

The emerging markets (EM) bond markets are well into their summer slowdown. There were virtually no bond issues from Russia at all in July; the entire running was made up by BCS Global Markets, which issued all seven issues coming out of Russia to the tune of a cumulative $63mn, although the wider CIS market saw more action with a cumulative $1.5bn of issues with another three decent sized bonds. What action there was all occurred in Central Europe with a cumulative $6.4bn from ten issues, reports Cbonds.

Russia’s bond issues always fall off in July and are traditionally even lower in August, when next to nothing is issued. This year BCS GM issued seven bonds of an average size of just under $10mn. BCS issued a total of four bonds of between $6mn and $20mn for a total of $46mn and has been issuing bonds of this size very steadily all year to fund its business.

In the CIS the bigger bonds all came from Ukraine, where the state-owned gas company Naftogaz came to market with two issues of €600mn and $335mn with corresponding yields of 7.125% and 7.375% for bonds that mature in 2024 and 2022 respectively.

Following the landslide election victory of Ukrainian President Volodymyr Zelenskiy in April and the even more surprising victory of his Servant of the People (SOTP) party in the parliamentary elections in July, investors are optimistic about Ukraine’s future for once and the market has been ripe for bond issues. The bigger story is not the sovereign issues but the booming domestic market, which was hooked up to the Clearstream payments and settlements system in the summer. Non-resident bond investors have bought a total of $3.3bn worth of hryvnia-denominated bonds this year and now account for 12% of the total outstanding.

Ukrzaliznytsia (Ukrainian Railway) also tapped the market with a $500mn issue that matures in 2024 and pays 8.25% - the company’s second attempt to issue a bond in the last year.

Year to date the CIS market has issued a total of $19.6bn and Russia $13.5bn, which is more than the $17bn and $9.5bn these markets issued during the same seven months last year. However, July was a very slow month for both markets, accounting for only 8% of the bonds issued this year in CIS and a vanishingly small 0.5% in Russia. The biggest bond issuing month this year so far was March, which accounted for a third (34.4%) of all bonds issued in the CIS and a whopping 45% in Russia. June was also a good month in both markets (26.1% and 23.7% respectively).

The bond market in Central Europe was much more active, with several large sovereign issues. The ten issues brought the total issued over the first seven months of this year to $36.4bn – well ahead of the $26.5bn issued in the same period last year and almost as much as the $38.9bn that was issued in all of 2018.

North Macedonia could get the go-ahead for EU accession negotiations as soon as March, the month before its citizens go to the polls in a snap general election, Prime Minister Oliver Spasovski said in an interview with bne IntelliNews.

Albania takes one step forward, two steps back towards the EU

After the refusal of some EU members to start accession negotiations with Tirana because of the lack of required reforms, I travelled to Albania to see and hear for myself.

Russia's leading petrochemical plant Sibur saw revenues down in 2019, but profits up and plans on track for long term growth

Russia’s leading petrochemical producer won’t hold its highly anticipated IPO this year, or even next year, but despite tough market conditions this year the outlook for the company remains bright

Market interventions: the case of the US sanctions on Russia

The use of sanctions to pressure countries has become the go-to foreign policy tool but the economic repercussions are still not well understood and new sanctions on Russia by the US could backfire.

The LSE-listed lender’s CFO Giorgi Shagidze spoke to bne IntelliNews about the bank’s plans for a country that has won international plaudits for its reforms.

Election won’t derail reform process says North Macedonia’s PM
1 day ago
Albania takes one step forward, two steps back towards the EU
1 day ago
Russia's leading petrochemical plant Sibur saw revenues down in 2019, but profits up and plans on track for long term growth
3 days ago
Market interventions: the case of the US sanctions on Russia
3 days ago
Renewed frontier – Georgia’s TBC Bank laying groundwork for move into Uzbekistan
7 days ago