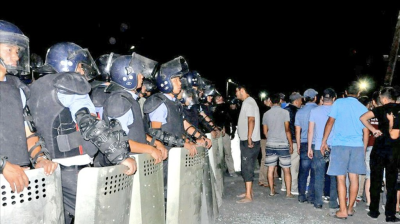 Supporters of Atambayev had been barricading his compound for weeks in preparation for just such a raid.
By bne IntelliNews August 8, 2019

Kyrgyz security and law enforcement forces withdrew from the residence of former president Almazbek Atambayev early on August 8 following an unsuccessful attempt to arrest him in a special forces raid that left one serviceman dead and 45 people hospitalised with injuries. Among those injured during the clash were 15 police officers.

The withdrawal took place after negotiations with Atambayev supporters, who put up bloody resistance against the operation on August 7 in Koi-Tash village, outside the capital Bishkek. In exchange for authorities evacuating from the compound, the supporters agreed to free six servicemen whom they took hostage during the raid.

Things have clearly come to a head between Atambayev and his successor President Sooranbai Jeenbekov who have remained locked in a bitter row almost since the latter took office in late 2017. Before he became president, Jeenbekov was seen by many observers as likely to become nothing more than a puppet of Atambayev, who was the central figure in Kyrgyzstan’s two revolutions, which toppled the governments of Askar Akayev in 2005 and Kurmanbek Bakiyev in 2010. Instead the two became embroiled in a power struggle over influence in Kyrgyz politics and the Social Democratic Party, which controls the majority coalition in parliament. Atambayev saw his popularity wane during his presidency, thus there is no clear prospect of present events sparking a third revolution. 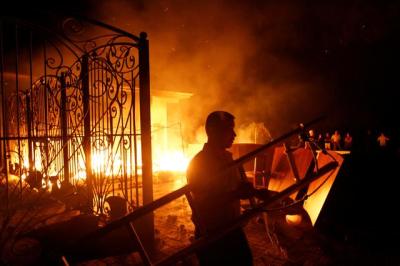 A fire rages at the compound during the raid that left one serviceman dead.

The authorities’ failed operation was an attempt to carry out a third subpoena issued in an unspecified investigation. Atambayev refused to comply with any of the subpoenas by surrendering himself and instead headed to Moscow where he appears to have sought the support of Vladimir Putin. However, there has been no indication that following his meeting with Atambayev the Russian president was prepared to back the ex-president in his standoff with his successor.

Atambayev’s supporters have been camping at his barricaded compound for weeks now. Under Kyrgyz law, a refusal to obey two subpoenas in a row makes a person liable for forcible detention for questioning.

After the special forces left his compound, Atambaev released a video statement on August 8, aired on Aprel TV (which posted a “video chronology” of events), in which he said the attempt to arrest him was unconstitutional and illegal.

Atambayev noted that he has offered to provide written responses to questions from the investigation instead of showing up at the interior ministry, but “the authorities did not heed my calls to act within the confines of the law…I am ready to answer any questions, because there was no corruption,” Radio Azattyk reported him as stating. He also demanded that the authorities ensure that the “special forces do not shoot at your own people”. 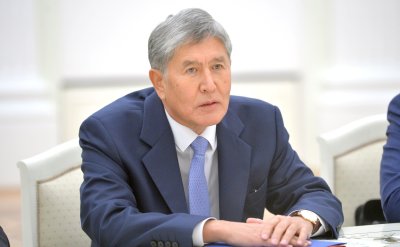 Atambayev was the central figure in Kyrgyzstan’s revolutions of 2005 and 2010.

While he still had enough supporters to defend his residence from a raid by security forces, Atambayev seems unlikely to inspire another revolution. However, his feud with Jeenbekov, who stripped Atambayev of his ex-presidential immunity after the introduction of a new law, does not bode well for Kyrgyzstan’s already toxic political environment. If Atambayev can be taken down like this, so can Jeenbekov or any other ex-president. That reality might tempt future Kyrgyz leaders to hold on to power, jeopardising the Central Asian nation’s struggle to install a functioning democratic government.

When the assault on Atambayev’s compound began, he was outside in the courtyard shaking hands with supporters, a video filmed by Radio Azattyk, showed. He was whisked away shortly after the attack began. The video also showed his supporters waiting for the authorities to break in as they heard sporadic gunfire on the other side of the barricaded wall surrounding Atambayev’s residence.

Police were seen firing tear gas into crowds that gathered outside the fortified compound, while the ex-president’s supporters threw rocks at police.

The Kyrgyz State Committee for National Security (UKMK) said the police only used rubber bullets during the raid. 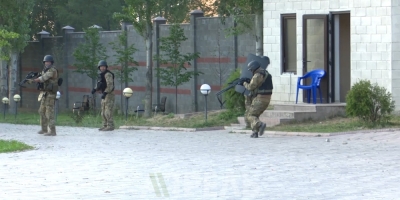 Troops filmed outside the raided compound by Aprel TV.

Jeenbekov’s office said in a statement that he had interrupted his vacation and would return to Bishkek from a resort at Issyk-Kul Lake.

Chuy regional police chief Samat Kurmankulov was among the injured servicemen, officials said. Doctors operated on his head and he was listed as in a critical condition, following head trauma caused by rocks thrown at oncoming police, RFE/RL reported the Health Ministry as saying. 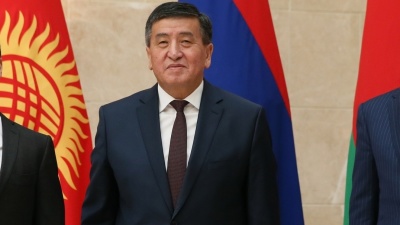 Prior to his taking office, critics said President Sooranbai Jeenbekov would prove to be a puppet of Atambayev.

Kyrgyz, Tajik troops move back from border after fighting that killed dozens

British Prime Minister Winston Churchill was driving through Moscow during the depths of winter on his way to meet Stalin during WWII. They passed a cluster of Russians on a street corner. "What are they doing?" he asked. "Eating ice cream sir."

Russia’s economy contracted less than feared in 2020 and now it is bouncing back from the coronacrisis faster than analysts were expecting.

If Central Asian farmers don’t radically change how they use water, the region will not feed China.