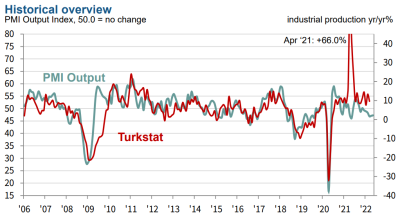 Business conditions in the Turkish manufacturing sector remained subdued in May amid muted customer demand and ongoing price pressures, according to the latest purchasing managers’ index (PMI) survey data from Istanbul Chamber of Industry and S&P Global, released on June 1.

The headline PMI was unchanged at 49.2 in May from April. Any figure greater than 50.0 indicates an overall improvement of the sector. The reading signalled a third successive moderation in the health of the manufacturing sector, albeit one that remained only marginal.

Commenting on the data, Andrew Harker, economics director at S&P Global Market Intelligence, said: "Demand in the Turkish manufacturing sector remained subdued in May amid the familiar headwinds we've seen in recent months, with firms also struggling to secure export business amid an economic slowdown in Europe.

"That said, there were some signs that doing business might start to get easier soon. In particular, supply chain constraints were the least pronounced since September 2020, while cost inflation eased for the fifth month running. A sustained period of job creation means that firms will be ready should these tentative improvements result in renewed order growth."

Both output and new orders slowed during May, extending the current periods of easing to six and eight months, respectively, S&P Global said, adding: “In both cases, however, there were tentative signs of improvement as rates of moderation softened.”

New export orders eased to the greatest extent in two years, with some firms highlighting the economic slowdown in Europe.

Manufacturers continued to raise employment as part of efforts to expand capacity. Staffing levels were up for the 24th month running, though only modestly.

The accumulation of post-production inventories was the most marked since September 2015, the data also showed.

Supply chain disruption eased, with the latest deterioration in vendor performance much less pronounced than that seen in April and the least marked overall since September 2020, added S&P Global.

Consumer prices rose 22.5% y/y in November, accelerating from a 21.1% increase in the previous month.

The National Bank of Ukraine will keep the key policy rate unchanged at 25% per annum, the bank stated in a report on December 8.

National Bank of Serbia seeks to limit the spillover effects of import price growth on domestic prices as inflation reached 15% in October.

Industrial production declines 3.5% m/m in October, the first contraction in five months and the first since the pandemic.

Inflation slowed down slightly from the 19.8% recorded a month earlier.