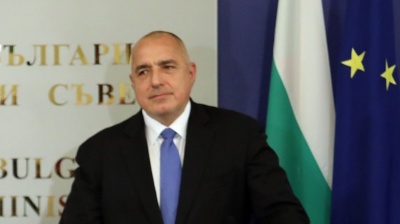 Bulgarian Prime Minister Boyko Borissov pledged to resign once a process to make constitutional changes is set in motion.
By Denitsa Koseva in Sofia August 14, 2020

Bulgarian Prime Minister Boyko Borissov’s pledge that he will resign once a process to make constitutional changes is set in motion got a sceptical reception from President Rumen Radev and many other Bulgarians.

Borissov announced on August 14 that his party will initiate a request for a Grand National Assembly, a special assembly that is elected to make constitutional changes, and resign as soon as the request has been accepted by the parliament.

He made the announcement after more than a month of mass anti-government protests, in which hundreds of thousands of people demanded the resignation of his government.

Among the changes outlined by the prime minister are a proposal to cut the number of MPs by half to just 120, a statement from Borissov published on the government’s website says. The number of MPs in the Grand National Assembly would be cut from 400 to 280.

He also talked of changes to make the judiciary more accountable, including regular parliamentary hearings for the chief prosecutor.

Along with the resignation of Borissov and his cabinet, the protesters have been pushing for chief prosecutor Ivan Geshev – whose appointment last year sparked strong opposition – to stand down.

In his address on August 14, Borissov talked of a “daily escalation of huge political tensions” that has been “extremely dangerous for democracy”, and acknowledged a “deep desire for change” on the part of many Bulgarians.

Several hours after Borissov made his unexpected proposal, Radev addressed the nation and said a government that “methodically tramples on the separation of powers, violates the law, stifles freedom of speech cannot propose changes to the constitution”.

According to the law, calling a Grand National Assembly can be proposed only by the parliament with the approval for more than half the MPs, and the president must approve it.

“The protests demanding the resignation of the government and the chief prosecutor have lasted more than a month. The trust in the ruling majority has been irretrievably lost. The changes in the cabinet have not persuaded anybody. The repressions, provocations and attempts to neglect the civil discontent are only confirming the necessity of the demanded resignations [of the government],” Radev said.

He added that Borissov’s proposal shows disregard for the constitution as the prime minister is not entitled to make such a proposal.

Earlier in the day Borissov had slammed Radev, a vocal supporter of the protests, saying: “The president has abandoned his primary role as a unifier of the nation. In his desire to be a political leader, he deliberately fuelled tensions between the institutions, to the point of pitting Bulgarian citizens against Bulgarian citizens. He divided society, waved his fist, and set fire to the destructive power of opposition.”

The prime minister also voiced strong criticism of the protesters and their supporters for attacks on public property and “attempts at bloody excesses”, and claimed the protests had been influenced by the oligarchy and the underworld.

His speech gave new energy to protesters and in the evening of August 14 large numbers of people gathered in Sofia to demand his and Geshev’s resignations.

Many people criticised Borissov’s initiative on social media, saying he is either trying to cheat people, or to gain more time.

“While you are playing [Russian President Vladimir] Putin to me, do not forget that I am paying your salary, I put fuel in your Jeep (which is mine), I fill your drawers [a reference to leaked photos of Borissov’s bedside drawers containing a gun and wads of cash] and your offshore accounts! I shall not stand your lack of respect to me and shall not allow you to use your position, which I have given to you, to threaten me with laws you do not respect. You, dear premier-mutra [the Bulgarian mafia from the 1990s], are my ordinary, poorly-educated and very bad-mannered employee. And I think I do not want you to work for me anymore,” one of the protesters, Radoslav Bimbalov, wrote on Facebook. His post gained significant popularity.

Lubomir Alamanov, a prominent PR expert, also commented on Borissov’s speech and noted that the protesters want Borissov’s resignation, not for him to start changing the constitution.

He added that Borissov’s proposal is “yet another Perestroika” simulating real decisions.

“For the politicians responsible for the blockage of the state to attempt to restart it is like letting a thief restart a security system. Or, as if [communist dictator] Todor Zhivkov was leading the country towards democracy,” Alamanov also wrote.

Alamanov also pointed out that, by law, the current government would stay in power during the Grand National Assembly, unless the current parliament, which is controlled by Borissov’s ruling Gerb party, specifically instructs it to form a new government. Moreover, the procedure for calling a Grand National Assembly would take between two and five months, during which time the government will also stay in power. If Borissov’s proposal was accepted, it could give him years of power, as the constitutional changes could theoretically be debated for years.

Hristo Ivanov, one of the leaders of the opposition non-parliamentary Democratic Bulgaria, commented that the proposed constitutional changes, as well as other, much bolder and sorely needed amendments, can be made by an ordinary assembly if there is a political will.

“Unfortunately, in Boyko Borissov’s announcement we do not see a real solution to the crisis,” Ivanov commented in a statement.

He added that Borissov’s main goal is to delay his resignation so that he can organise the next general election, and forecast that the prime minister would alter the election rules too at the last minute.

He pointed out that calling a Grand National Assembly would halt the democratic process instead of restarting it, recalling that the same approach was used by the former communist party in 1990, a year after the formal collapse of the communist regime in the country.

UK, Canada impose sanctions on Lukashenko and his top officials
14 hours ago
Poland tightens restrictions in response to rising coronavirus cases
15 hours ago
World must tell Turkey to “get out” of Caucasus says Armenian PM
18 hours ago
French President Macron promises Belarus’ opposition leader Tikhanovskaya to do all he can to help
1 day ago
Nobel laureate and Coordinating Council member Svetlana Alexievich leaves Belarus for medical treatment in Germany
1 day ago