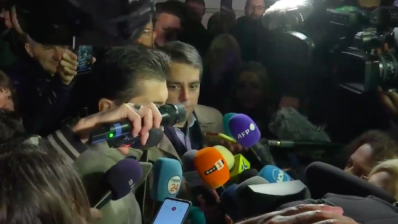 The four political parties in Bulgaria that are holding coalition talks and will most likely form a government agreed on November 27 that relations with North Macedonia should become a priority and that a roadmap that could lead to unblocking of the start of EU membership talks with Skopje should be urgently adopted.

Currently the progress of North Macedonia and Albania towards EU accession is stalled because of Bulgaria’s veto on the start of accession negotiations with North Macedonia, imposed when the previous Bulgarian government sought to wring concessions out of Skopje over bilateral language and historical issues.

The international community is putting significant pressure on Bulgaria to find a compromise with North Macedonia and unblock the process.

The live-broadcasted talks, initiated by Change Continues, which won the biggest share of votes on November 14, are held in 18 working groups of experts and include representatives of the Bulgarian Socialist Party (BSP), There Are Such People (ITN) and Democratic Bulgaria.

Change Continues said that the country should maintain a "friendly tone" but insist on the demands adopted by parliament earlier this year. The party also believes that bilateral committees should resume sessions as soon as possible and to discus common projects, including establishing Sofia-Skopje flights. Bulgaria should also provide technical expertise to ease the EU integration of North Macedonia.

According to the BSP, Bulgaria should resolve its disputes with North Macedonia but without making compromises on its positions. The party also believes that a wide consensus on Bulgaria’s policy towards its neighbour should be achieved. However, BSP is willing to revise the demands posed by Sofia to Skopje.

The BSP and Democratic Bulgaria believe the country should draft a roadmap to clear up the issues between the two countries. It should include all sensitive topics so that Bulgaria can have guarantees that North Macedonia will fulfil its promises, according to the BSP.

ITN says that North Macedonia’s EU membership talks should be unblocked as its integration is also in Bulgaria’s interest. However, a new document guaranteeing that Skopje would not have any demands related to territory or minorities, as well as stopping hate speech should be signed. Moreover, ITN says that the EC should engage in the negotiations between the two countries.

Democratic Bulgaria’s Stefan Tafrov said that Bulgaria was unable until now to explain its position to its European partners. The formation proposes a roadmap with specific and achievable requirements for North Macedonia that would also be easy to explain to the rest of the EU.

The news of the Bulgarian parties’ positions on North Macedonia came as the neighbouring country’s Prime Minister Zoran Zaev announced his resignation as head of the ruling SDSM. Zaev previously said he will step down as prime minister in the near future after the SDSM’s poor performance in the recent local elections, which was partly due to the country’s failure to progress towards EU accession. The final announcement of his resignation came following the discouraging signals from Sofia that Bulgaria will not remove its veto on the start of the EU accession talks with Skopje in December.