GERB has a substantial lead over the rival Bulgarian Socialist Party, though it will not have enough seats in the parliament to rule alone, and will have to assemble a coalition. Among the parties expected to make it into the new parliament, the nationalist United Patriots or Volya (Will), a new populist party launched by businessman Vesselin Mareshki, are GERB's most likely partners. The party will also most likely have the unofficial support of the predominantly ethnic-Turk Movement for Rights and Freedoms (DPS).

At this stage, these five parties have passed the 4% of the votes threshold needed to enter the parliament. According to bne IntelliNews calculations, the preliminary data translate into the following distribution of seats in the 240-member parliament: GERB (97), BSP (79), the United Patriots (27), DPS (25) and Volya (12). 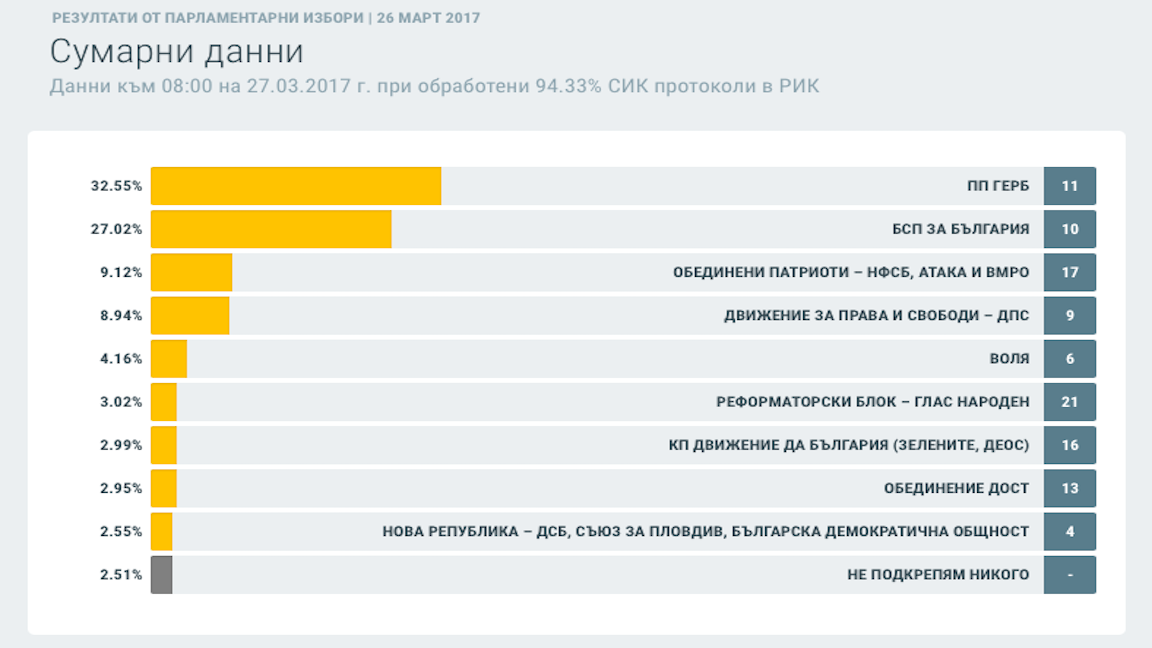 The right-wing Movement Yes, Bulgaria had 2.99% and the right-wing Reformist Bloc 3.02%. Dost, a new party founded in 2016 by former DPS leader Lyutvi Mestan, and the right-wing project Nova Republika were chosen by 2.95% and 2.55% respectively. None of these parties will enter the parliament based on the current vote count. The option “do not support anyone” was chosen by 2.51%.

GERB leader Boyko Borissov told a press conference that the results of the elections confirm that GERB must be the leading party in the government.

In a statement late on March 26, BSP leader Korneliya Ninova conceded defeat and congratulated GERB on its win. The BSP doubled its votes compared to the 2014 general election, Ninova pointed out, though expectations of a last-minute landslide for the party proved to be unfounded.

Ninova also said that if the party receives a mandate, it will try to form a government. However, she ruled out a grand coalition with GERB.

Slavcho Atanasov of the United Patriots told bTV that the formation would not enter a coalition that also includes the ethnic parties DPS and Dost.

Volya leader Mareshki has clearly said that his party will support GERB. Based on the current vote outcomes, those three parties will have enough seats to form a coalition without the formal participation of the DPS.

As usual, most of the votes from abroad came from neighbouring Turkey and there were reports of long queues outside polling stations for most of the day. Daily Dnevnik reported that the main reason for the queues was a rule adopted by the central election committee in the last days before the election, according to which each voter had to fill out a declaration for voting in the district based on their current residential address.

Around 200 busses transporting Bulgarians from Turkey entered the country on March 26 – significantly less than the 1,000 buses forecast by the United Patriots, who blocked the border with Turkey on March 21 and again on March 25, aiming to prevent “electoral tourism”. According to state national radio, some people had to walk through the border in order to be able to vote.

Evgeni Mihaylov of the small Dost party said that the party will object to the election, claiming that constitutional rights of Bulgarians have been violated, but added no details.

On January 24, President Rumen Radev scheduled early parliamentary elections for March 26. Supported by then opposition BSP, former air force commander Radev won the second round of the presidential elections on November 13, defeating the candidate of then ruling GERB. On November 14, Borissov submitted the resignation of the government to the parliament.

Sofia streets empty as most of Bulgaria put in coronavirus “red zone”
BALKAN BLOG: What’s wrong with the Macedonian language?
COMMENT: Why the Balkan region should be on investors’ radar screens