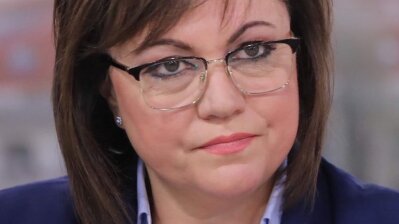 BSP leader Kornelia Ninova says party did everything in its power to form a new majority. / bsp.bg
By Denitsa Koseva in Sofia July 27, 2022

The Bulgarian Socialist Party (BSP) will return the last mandate to form a government after failing to gain a majority in parliament for the reform agenda it backs along with two other parties, the head of the party’s parliamentary group Georgi Svilenski said on July 27.

This means that the country will hold an early general election, most likely on October 2, and as parliament will be dissolved until then, the country risks failing to complete reforms needed to unlock EU funds and failing to implement social measures that would ease the inflationary pressure on households.

“What happened today has shown the Bulgarian society who on which side of the division line is – who wants to fight against corruption and who wants to protect it,” the chairman of the BSP’s parliamentary group Georgi Svilenski said at a press briefing.

On July 26, the BSP decided to test whether it can put together a majority in parliament by seeking by lawmakers' approval of a reform agenda for the next six months and the nomination of outgoing Finance Minister Assen Vassilev for prime minister.

However, on July 27, the opposition parties refused to add that to the agenda for the parliament session.

“In this situation and according to the decision of the national council [of the BSP] tomorrow we shall return the mandate to President Rumen Radev,” Svilenski said.

The BSP got the third mandate, after Change Continues, led by Vassilev and outgoing Prime Minister Kiril Petkov, failed to attract enough MPs to secure a majority for a cabinet headed by the finance minister. The second-largest party in parliament, former ruling party Gerb, refused to even try to form a government and returned the mandate immediately.

The mandate was backed by the current ruling coalition partners – Change Continues, BSP and reformist Democratic Bulgaria – as well as on several independent MPs who have left There Are Such People (ITN), which pulled out of the ruling coalition at the beginning of June.

Svilenski accused two opposition parties, far-right Vazrazhdane and ITN, of being in cahoots with Gerb and the ethnic-Turk Movement for Rights and Freedoms (DPS).

Hristo Ivanov, one of the leaders of Democratic Bulgaria, called the move by the opposition irresponsible and inadequate.

“Our assessment is that this is the result from a party egoism, a very petty attitude towards politics in Bulgaria on the background of the great challenges the country is facing. Severe inadequacy and irresponsibility,” Ivanov told reporters.

Democratic Bulgaria’s co-leader has repeatedly called on MPs to set aside their personal feelings and unite to carry out the most urgent and important reforms to help the country go through the tough winter.

“I do not see enough frightened people in Bulgarian politics. I see people who are forcing us to deal with their personal emotions and their own complexes, with very petty topics. But I do not see enough people frightened about what is happening in the world around us and with Bulgaria. That makes me very concerned,” Ivanov, who is usually very moderate in his statements, said.

Change Continues has not yet commented but has been saying for the last few weeks it was ready for an early election. It hopes to gain a large enough majority to carry out tough reforms in the next parliament.

However, polls show that the next parliament would be even more fragmented with seven political parties, including two openly pro-Russian formations that would want to see Bulgaria out of Nato and the EU – Vazrazhdane and Bulgarian Ascend.

This could mean that either the current coalition partners must unite with their fiercest opponents – Gerb and the DPS – and give up fight against corruption, or the country will have a government backed by Gerb, DPS and the pro-Russian parties, or will head for another early election.