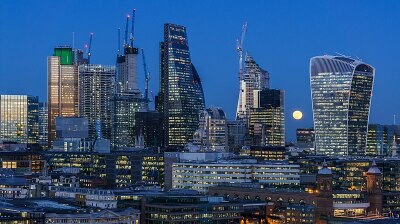 The UK provides 10% of Russia's imports in the accounting, management consultancy and PR sectors. / Image: Wikimedia Commons.
By bne IntelIiNews May 5, 2022

New sanctions announced by the UK on Wednesday, 4 May will cut Russian businesses off from British management consultancy, accounting and PR services. Foreign Secretary Liz Truss said that by targeting industries which are critical to Russia’s economy, the sanctions will “help ensure Putin fails in Ukraine”.

The United Kingdom’s economy hinges around services, which comprise around 80% of economic output. London has come under scrutiny since Russia’s invasion of Ukraine for its network of financial and management services which do business with Russian clients.

The government said that the UK accounts for 10% of Russian imports in the consultancy, accounting and PR sectors.

"Our professional services exports are extraordinarily valuable to many countries, which is exactly why we're locking Russia out,” said Business Secretary Kwasi Kwarteng.

"By restricting Russia's access to our world-class management consultants, accountants and PR firms, we're ratcheting up economic pressure on the Kremlin to change course," he added.

Alongside the ban on management services, the UK also announced 63 new sanctions, including on prominent figures and organisations from Russian media.

The UK government said that these measures were a response to new research “exposing the Kremlin’s shadowy troll factory tactics.”

"For too long RT and Sputnik have churned out dangerous nonsense dressed up as serious news to justify Putin's invasion of Ukraine,” said Tech and Digital Economy Minister Chris Philp.

"These outlets have already been booted off the airwaves in Britain and we've barred anyone from doing business with them. Now we've moved to pull the plug on their websites, social media accounts and apps to further stop the spread of their lies."

The government has introduced legislation requiring social media and online services to block content from Russian state-controlled news services RT and Sputnik. Sanctioned individuals include war correspondents for All-Russian State Television and Komsomolskaya Pravda, as well as employees of state-owned outlet Channel One.

These latest sanctions bring the total number of individuals and entities sanctioned by the UK to over 1,600.