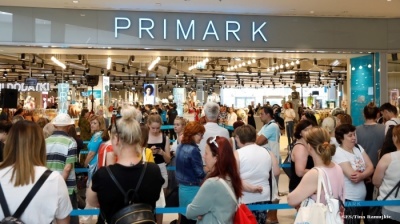 Long queues at the opening of Central and Southeast Europe's first ever Primary store in Ljubljana in 2019.
By Clare Nuttall in Ljubljana February 17, 2020

Slovenia has seen a high level of activity by retailers over the last three years, but investment is expected to slow as the eurozone crisis bites across the region.

Slovenia is one of the smaller markets in the Central and Southeast Europe (CEE/SEE) region with a population of just over 2mn. Yet this is largely outweighed by the fact that Slovenia has the highest GDP per capita across both the Central and the Southeast European regions, according to World Bank data, with only Estonia and the Czech Republic coming close. 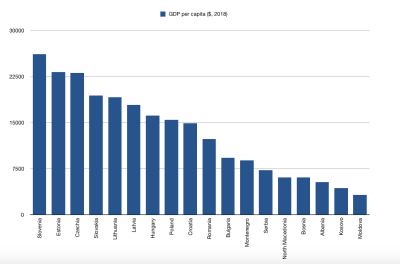 “[The] retail market in the country has been highly supported by large purchasing power potential, which has been encouraging for retailers,” says Jana Jovanovic, senior research analyst at international commercial real estate firm CBRE in Belgrade.

While bne IntelliNews' research has shown that both market size and income level are important when fashion retailers are expanding internationally, Slovenia’s relative prosperity has made it an entry point to the region for retailers.

“Slovenia is a stable macroeconomic environment and well-developed retail market. Over the years, Slovenia was the market entry point for various retailers looking to expand further in SEE markets. Retail market in the country has been highly supported by large purchasing power potential, which has been encouraging for retailers,” Jovanovic told bne IntelliNews.

Probably the most hyped arrival of the last 12 months was fast fashion giant Primark, which picked Slovenia’s Citypark mall in Ljubljana to open its long-awaited first store across the Central and Southeast Europe region.

Citypark’s operator, SES Spar European Shopping Centers, reported “thousands of enthusiastic customers” turning up for the opening of the Ireland-based retailer, and forecast that “Primark will enable Citypark to further bolster the city of Ljubljana as a shopping destination.”

The fast fashion retailer is now aiming for further expansion in the region, having announced plans for stores in Prague and Warsaw this year.

Other international retailers also announced expansion plans in Slovenia, among them Ikea, which started construction of its first store in the country in 3Q19.

Among the major domestic players, Slovenia’s largest retailer Mercator announced in a bourse filing in December it is entering a “new investment cycle where the most important investment is the logistics distribution centre in Ljubljana and investments in logistics capacities and network expansion in Serbia”. The group plans investments of €44mn in 2020, of which 57% will be allocated for projects in Slovenia.

As retailers target Slovenia, the country’s retail space is also being added to. “Ljubljana and other smaller cities are well supplied with retail offer, including various formats such as shopping centres, retail parks, big boxes, etc.,” says Jovanovic.

As of 3Q19, 50,000 sqm of shopping centres were under construction in the Slovenian capital, according to CBRE data. Those due to come online in 2020 include Austrian SES Spar European Shopping Centres’ 32,000-sqm Aleja shopping centre and the expansion of Supernova Rudnik.

International investors, specifically from neighbouring Austria, have been on an acquisition spree for Slovenian shopping centres in the last couple of years.

Yet another Austria-based developer, Immofinanz, bought eight retail parks in Slovenia, Serbia and Croatia in 2018 for a combined €90.5mn as it expands its Stop Shop retail park brand in the Balkans. The real estate package in Slovenia included three retail parks in Maribor, Krsko and Ptuj with roughly 22,000 sqm of rentable space, bringing the company’s Slovenian retail park portfolio to nine locations.

In late 2019, Immofinanz followed this up with the purchase of five more shopping centres in Slovenia, bringing its Slovenian portfolio of Stop Shop retail parks to 14.

As a small open economy, closely interlinked with fellow EU members, Slovenia is not expected to be immune from the slowdown in the eurozone. The European Commission’s Winter 2020 Economic Forecast anticipates that GDP growth across the eurozone will remain steady at 1.2% in 2020 and 2021, amid a challenging external environment, though the slowdown will be mitigated by internal positives, “continued employment creation, robust wage growth and a supportive policy mix”, though these “appear insufficient to shift growth into a higher gear”, according to the European Commission.

Dramatic fall in pollution in European coronavirus hotspots but business as usual in the Balkans
Coronavirus threat pushes businesses online
THE MITTELEUROPEAN VIEW: Why it is exactly the right time to fully revive the Vienna Initiative 1.0

Economy forecast to shrink by 0.9%.

From enabling their employees to work from home to offering new e-commerce services, companies in Central and Southeast Europe are moving their operations online in response to the coronavirus pandemic and associated lockdowns.

Officials do not explain why they are imposing such stringent internal restrictions if Turkmenistan is, as they insist, genuinely coronavirus-free.