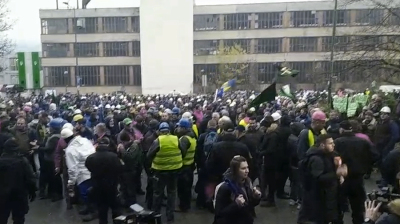 Protest of miners in Sarajevo
By Eldar Dizdarevic in Sarajevo November 24, 2021

The Independent Trade Union of Miners of FBiH previously announced that according to the regulation, the basic salary of miners was reduced from the current BAM850 (€434.6) to BAM570.

The president of the union, Sinan Husic, stated that the main demands of the miners are the repeal of the disputed regulations, the dismissal of the general director of Elektroprivreda BiH and the director of the coal mine within that company, and the determination of the minimum salary of BAM1,000 in mining in the Bosnian Federation. Production was suspended in all seven mines that are part of Elektroprivreda BiH. Later in the day, the miners added to their demands the dismissal of the directors of all the mines.

Minister of Energy, Mining and Industry Nermin Dzindic tried to address the miners in front of the government building around noon, but the miners whistled at him as he came accompanied by armed members of the interior ministry's special police. Dzindic's move provoked further revolt throughout the Bosnian Federation, and after that, the citizens of Sarajevo spontaneously started coming and bringing food and drinks to the protesting miners.

“Several requests from their list are logical and we will accept them, some are not logical and we need to talk. It is impossible to replace seven directors from seven mines at once,” said Dzindic. While the meeting in the Bosnian Federation government was going on, the miners outside chanted: “Thieves, thieves”.

The director of Elektroprivreda BiH, Admir Andelija, said that the ultimate demands of the union are such that it is impossible to talk, adding that they are even asking for an increase in electricity prices for households. He emphasised that there are no miners with a salary below BAM1,100. The president of the FBiH Mine Workers' Union said that the conclusions of the government were completely unacceptable for the miners and that they would remain in front of the building. “Tomorrow [November 24] we expect mass support from workers and citizens of Bosnia & Herzegovina,” Husic concluded.

During the day, the miners invited the popular Bosnian rock band Dubioza Kolektiv to join them in the protests. "We, the miners of the Federation of BiH mines, invite Dubioza Kolektiv, the best band in Bosnia & Herzegovina and the only one who has the guts to tell everyone everything, to come to the protests in Sarajevo," said one miner, local media reported. Members of the Dubioza Kolektiv reacted quickly. On their Facebook profile, they wrote: “They called us and we are coming. There is enough space in front of the building of the government of the FBiH. Let's all go tomorrow. Solidarity.” The miners' protests will continue on November 24.