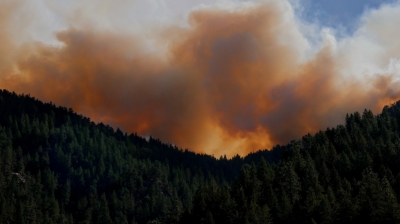 The IPCC has warned in its latest climate report that the effects of global warming are already widespread, and that some are now irreversible.

“Every fraction of a degree matters. Every voice can make a difference. Every second counts,” UN Secretary-General Antonio Guterres said.

“Coal and other fossil fuels are choking humanity," he went on, highlighting that the report catalogued an “an atlas of human suffering.”

People are getting “clobbered” by climate change and that the world’s biggest polluters were "guilty of arson" on our home, he added.

In terms of numbers, the report warned global warming since the pre-industrial era now stood at 1.1°C, and that 3.3bn people were at risk now to changes in the climate, while for the first time the IPCC warned that there will be major negative impacts on mental health as well as global health in general.

The report also stressed that nature had been hit harder than realised in previous reports. Half of the world’s species have shifted ranges and some are extinct because of climate change.

Staple crop production will become impossible in places such as the tropics, threatening the world’s food security. There could be many “multiple breadbasket failures” if global warming goes past 1.5°C.

The report stressed that the two most crucial ways of combating climate change are adaptation, which involves reducing climate risk, and mitigation, which is reducing emissions. It warned that far more investment in adaptation measures was needed, with 80% of climate financing now focused on mitigation.

Guterres urged the world to invest more in adaption, which means spending cash on new infrastructure to cope with current changes in climate and temperatures.

"Investments in adaptation work," he said, adding: “Adaptation and mitigation must be pursued with equal urgency … Delay [on adaptation] means death,” he warned.

Adaption is a major concern, as most climate cash is now being spent on mitigation, or measures to reduce CO2 emissions.

Adaptation finance accounts for only 20% of overall climate finance and an even smaller share goes to the most vulnerable communities. Least Developed Countries (LDCs) have received 14% of these flows over the last years, with Small Island Developing States (SIDS) hovering around 2%, according to green think-tank E3G.

Countries should commit to improving the quantity, quality and accessibility of adaptation finance, without burdensome procedures for vulnerable countries.

Petteri Taalas, Secretary-General of the World Metereological Organisation, said: "Our atmosphere today is on steroids, doped with fossil fuels … All countries are affected [by climate impacts], as we’ve seen in Germany, the US and Canada last year. It is likely that practically all human beings on the planet will face major disasters by the end of this century.”

Inger Andersen, Executive Director of the United Nations Environment Programme, said that the “clear message is climate change isn’t lurking around the corner waiting to pounce, it’s already here raining down blows on people. We are in an emergency heading for a disaster."

Crucially, she said that adaptation efforts so far were "too weak."

The IPCC’s Climate Change report message is clear and unequivocal: “Any further delay in concerted anticipatory global action on adaptation and mitigation will miss a brief and rapidly closing window of opportunity to secure a liveable and sustainable future for all.”

Emissions are crucial to keeping global warming in check. The IPPC report’s emphasis that the rise is now at 1.2C means that the world only has 0.3C left.

Emissions need to fall now to avoid missing the target. Research published by Our World in Data found that emissions must be cut by 15% a year from now on to meet the 1.5C target.

Developed countries urgently need to step up support for vulnerable countries to manage the impacts of climate change through investment in adaptation, resilience and addressing loss and damage, which remains a core ask of developing countries.

More public money is needed, partly to leverage private capital. This cash needs to be spent on natural and social infrastructure as well as physical assets.

Current financial support and pledges do not go far enough to address the needs of those most affected, who have done the least to contribute to climate change.

“Dramatically accelerating the phase out of fossil fuels and slashing emissions in half this decade is essential to avoid the risks that climate change poses to our societies, economies and security. Today’s report should be another reminder to our leaders of the urgency of this challenge, and what is at stake if we fail to adapt and to decarbonise fast enough. The IPCC’s next report in April will show that we already have many of the solutions to get there. What we lack is the political will,” said Tom Evans, Policy Advisor for Climate Diplomacy at E3G.

It is now up to the developed world to come up with the finance needed by poorer countries. Poorer communities are usually on the front line of climate change and bear the biggest consequences, but they have contributed the least to the problem.

Kate Levick, E3G associate director Sustainable Finance, said: “Climate impacts pose a threat to global prosperity and financial stability, in every country. It is time that richer countries understood that they are not immune from these effects. Finance must now be mobilised at scale to build resilience around the world, protecting the most vulnerable and fending off future financial shocks which could prevent a sustainable transition.”

The global wind industry welcomed the report, calling for annual wind capacity addition to multiply four-fold to keep on track with the IPCC’s goals.

“We need to accelerate, with greater urgency than ever, the phase-out of fossil fuels which are today destabilising power markets and international security. We need to rapidly deploy more wind and renewable energy to shore up our global energy system and protect the human and natural world. Global annual installations of wind energy alone must scale up by four times within this decade to get on-track,” warned Ben Backwell, CEO of the Global Wind Energy Council (GWEC).

The IPCC’s report itself calls for a reliable and resilient energy sector.

Carbon tracker, a research consultancy, viewed that reducing fossil fuels is the solution, if a difficult one.

“Challenging the status quo and fossil fuel incumbent thinking is central to the reallocation of capital into meaningful climate solutions to bring down emissions and avoid stranded assets,” said Carbon Tracker.

“There are many opportunities available to adapt energy systems to be more resilient. Wind and solar PV is cheaper in 90% of markets compared to their fossil fuel counterparts, and frontier technologies – hydrogen, battery storage, fusion – are all making headline breakthroughs,” Carbon Tracker added.

Climate change and global warming is now universally accepted by governments. The IPCC’s report, drawn up by its Working Group II, was unanimously approved by 195 member governments of the IPCC.

The report warned that more action is needed immediately and that progress and investment is far too uneven".

“To avoid mounting loss of life, biodiversity and infrastructure, ambitious, accelerated action is required to adapt to climate change, at the same time as making rapid, deep cuts in greenhouse gas [GHG] emissions. So far, progress on adaptation is uneven and there are increasing gaps between action taken and what is needed to deal with the increasing risks, the new report finds. These gaps are largest among lower-income populations,” the IPCC said in a statement.

What is needed is action, and quickly.

“This report is a dire warning about the consequences of inaction,” said Hoesung Lee, Chair of the IPCC.

“It shows that climate change is a grave and mounting threat to our wellbeing and a healthy planet. Our actions today will shape how people adapt and nature responds to increasing climate risks,” he said, adding: “Half measures are no longer an option.”