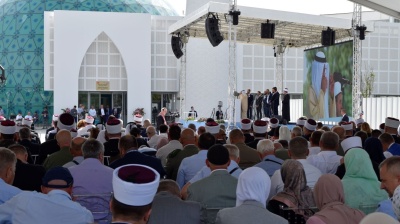 The mosque in Sisak is built to be energy efficient with heat pumps, solar panels on the roof and a 30 KWh photovoltaic plant. / sisak.hr
By bne IntelliNews September 11, 2022

Croatia opened the first eco-mosque and Islamic centre for the region in the town of Sisak with Turkey’s President Recep Tayyip Erdogan (after whom the mosque is named) and his Croatian counterpart Zoran Milanovic attending the ceremony, the Sisak municipality said in a statement.

As the climate crisis worsens, there is growing interest in building more eco-friendly places of worship. The mosque in Sisak is built to be energy efficient with heat pumps, solar panels on the roof and a 30 KWh photovoltaic plant. It also has energy-efficient LED lights.

The Islamic centre is expected to serve at least 4,000 people in the county. It covers an area of 2,600 square metres with 600 sq m dedicated to prayers and the remaining area open for visitors.

The Islamic centre also has multipurpose classrooms designed for religious students, a restaurant with Islamic specialities, a convention centre and a reading room.

The opening ceremony gathered 5,000 people from the Islamic community in Sisak as the mosque’s construction had been planned for more than 50 years. It was finally completed with Turkish support.

"Together we completed this precious project, which is a sign of our friendship and brotherhood, and I believe that this centre will be one of the main addresses for meeting and socialising in the city, where our friends of other faiths will also spend time," said the Turkish president in his speech.

"An integral part of Sisak is the Bosniak community, which, like all other Sisians, suffers hardships and troubles. However, adversity did not defeat my fellow citizens, on the contrary, it made them more determined and invincible. Today we stand before the symbol of their victory and ours,” said Sisak mayor Kristina Ikic Banicek.

The chief imam of Sisak, Alem Efendija Crnkic, commented that it was a “a privilege to live in a city where the citizens rejoice over the completion of the mosque and where not a single incident worthy of mention has been recorded in six years”.

Sisak was badly affected by a major earthquake that struck in December 2020, with the town of Petrinje the worst affected but widespread damage in other parts of the county including the town of Sisak.

As well as the eco-mosque in Sisak, Croatia also has a smaller mosque in the town of Gunja and a smaller Islamic centre in Umag.

The first environmentally friendly mosque is believed to be Dubai’s Khalifa Al Tajer Mosque, which opened in 2014. It has systems to reduce wasteage of water, which worshippers use for their ablutions before the five daily prayers. The first purpose-built eco-mosque in Europe was the Cambridge Mosque in the UK.

Another initiative is the Green Mosque project in Morocco, under which a pledge was made to incorporate eco-designs such as solar panels and LED lighting into existing mosques. They include the historic 12th-century Jami’a al-Kutubiyya mosque in Marrakech, where solar panels were installed in 2017.

bneGREEN: Most growth in power generation by 2050 will be solar and wind – BP
4 days ago
bneGREEN: Renewable energy was a hot topic in Davos but for Europe, much work remains
11 days ago
bneGREEN: Floods turn Drina river in Bosnia into floating landfill
13 days ago
Central Asia’s shorter winters are whittling away glaciers
18 days ago
bneGREEN: River of waste clogs Serbia’s Lake Potpec after heavy rains
19 days ago