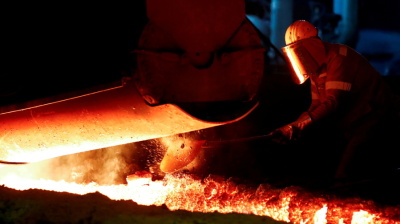 Metals demand is booming as increased use in transport products and energy transition projects to curb climate change begin to roll out in larger scale. And that is unlikely to stop anytime soon, according to a panel discussion hosted by the Moscow Exchange (MOEX).

Nornickel, one of the world largest producers of nickel platinum and copper, estimates that by 2030, the market will require an additional 1 million tonnes of nickel per year. This rising demand partly stems from the growing importance of batteries in low-carbon projects. The share of nickel used in batteries could grow from 8% currently to above 30% by 2030.

“We’ve observed an upsurge in demand for nickel. It’s used as a catalyst in lithium batteries, and it’s going to be adopted more and more in the future,” said Denis Sharipin, Director of Strategic Marketing at Nornickel. “The use of copper in electric vehicles will also grow fourfold in the near term, according to our predictions,” he added.

Aluminium is another enabler of carbon-reduction efforts that has seen rising demand. It is both lightweight and durable, which makes it ideal for the construction of such things as next-generation aircraft fuselages that reduce fuel consumption needs.

Rusal, a leading global aluminium producer focused on producing metals with a low carbon footprint, has seen stable growth in demand at 3-4% per year.

According to Oleg Mukhamedshin, Rusal’s Director of Strategy, Business Development, and Financial Markets, “the reason is that our customers also work along the greener economy agenda, and aluminium is broadly used in electric vehicles, in renewables, green packaging, green construction. We believe that in the next year, 16-18 million tonnes of aluminium will be added to the overall output.”

Yet metals producers must also clean up their act. Steel production alone is responsible for 8% of the world’s CO2 emissions, according to a report by McKinsey. The industry will have to push ahead with a future that emphasizes recycling and new approaches to production in order to address this problem.

The good news is that recycling is developed and widely used. About 75% of the aluminum ever produced is still in use today, Mukhamedshin said. The emissions generated when it is created (about 11.5 tonnes of CO2 equivalent per tonne of aluminum, according to Aluminium Insider) go a long way. “Recycling of aluminium requires only 5% of the energy supply that is required for primary production of aluminium,” Mukhamedshin added.

Metals themselves can now be manufactured in greener ways. Producers are generating low-carbon alternatives to traditional production processes to improve their environmental footprint.

In steel production, “the use of pellets in an arc furnace reduces emissions sixfold,” according to Aleksey Voronov, Deputy General Director for Finance and Economics at steel company Metalloinvest. “If you use steel scrap and briquetted iron in an electric arc furnace, then you reduce emissions by 75% compared with traditional furnaces.”

Green and blue hydrogen used in electric arc furnaces – generated from renewable electricity or natural gas and carbon capture, respectively  –  can enable steel production that is much less carbon-intensive.

For this to happen, industries need to scale up the production of hydrogen and generate renewable energy in much larger quantities than at present. That change is underway, but the pace will depend on companies’ ability to harness technology and scale to reduce production costs.

“We expect that hydrogen will be more broadly used as a resource for hot briquetted iron and direct reduced iron production”, Voronov said, referring to two of the least carbon-intensive methods for manufacturing steel.

“Lately, we’ve been investing in those premium products which are in most demand nowadays, and we continue to increase that investment. This year, capex in that area will double compared with the previous year… By 2036, green hydrogen will be used by our company, and greenhouse gas emissions well be reduced by 75%. We’re planning to be net zero by 2050,” Voronov said.

National policies to lower carbon emissions standards to mitigate climate change will certainly not sideline metals. Producers are already feeling the pressure from the climate agenda, which will only grow as new measures move into industrial-size scale.

The industry itself already has much to celebrate in this regard. However, it will now need to double down on its investment into a lower carbon world if it wants to participate in the gains.

This article first appeared in New Economy Observer (NEO), a digital publication covering the intersection between finance and social responsibility, with a special focus on emerging markets. IT offer news and analysis on major issues shaping the new global economy, including climate change and renewable energy, sustainable development, e-commerce and tech innovation, and the future of work.