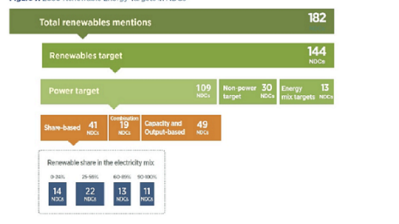 A total of 144 NDCs out of the 182 submitted include quantified renewable energy targets and only 30 explicitly mention heating, cooling or transport.

However, the 2.1°C forecast is lower than the previous figure of 2.8°C, which earlier NDCs had suggested.

The warming came from the International Renewable Energy Agency (IRENA) in a new report that looks at governments’ current climate pledges.

“The fact that three quarters of the global emissions are now covered by net-zero ambitions demonstrates the extent to which Glasgow realigned the world’s perspectives on what is possible and narrowed the gap with what is necessary,” said IRENA director-general Francesco La Camera.

The report highlighted that 193 countries had to date ratified the Paris Agreement (up from 190 in 2020) and that 194 parties have now submitted an NDC.

Together with the new and updated NDCs, current and announced net-zero pledges are projected to further reduce emissions by approximately 20% by 2030 compared to the business as usual before the first NDCs, with the potential to limit warming to 2.1°C. However, this is still well above the 1.5 °C goal.

Meanwhile, another positive trend is that more than 100 countries are promising to cut emissions of methane by 30% by 2030. These pledges, combined with the NDCs and net-zero targets, have been found by the International Energy Agency (IEA) to be sufficient to hold the rise in global temperatures to 1.8°C by the end of the century.

As of 15 November, 2021, which means just after the COP26 conference in Glasgow, 182 parties had included renewable energy components in their NDCs, of which only 144 had a quantified target.

From these targets, 109 focus on power and 30 explicitly mention heating and cooling or transport. Only 13 parties have committed to a percentage of renewables in their overall energy mixes.

A total of 19 G20 members have submitted new or updated NDCs, out of which only 11 have submitted an NDC with pledges that are stronger than their previous NDC.

Around 32 Least Developed Countries (LDCs) and 27 Small Island Development States (SIDS), representing a total of 55 parties, have submitted new, updated or second NDCs since September 2020, of which more than 35 parties have submitted stronger pledges. About 44 parties have included renewable energy targets.

However, while all this progress is welcome, the report warned that in 178 countries, a mismatch exists between renewable energy targets in the NDCs and those featuring in national laws and official strategies and plans, suggesting that continued improvements to both the NDCs submitted to the UNFCCC and to government policies and laws are needed if the progress made at COP26 to be built on and promises kept.

However, IRENA warned in no uncertain terms that the renewable energy commitments in current NDCs are nowhere near those required to meet the 1.5°C target for 2100, or the 2050 net-zero target.

This compares with 109 parties that have stated defined targets for renewables, whether in terms of capacity (GW) or output (GWh).

IRENA said that such targets failed to take into account a country’s wider power sector, and could hide a failure to commit to reducing fossil fuels’ importance in a country. This lack of clarity means that governments are not being ambitious enough in setting out how they will reduce emissions.

IRENA has called for more focus on electrification, requiring specific and quantified targets for heating and cooling and transport.

The report stressed that a key way forward was the conclusion at Glasgow of the Paris Rulebook, which outlines the guidelines for how the Paris Agreement is delivered.

The two most important elements of the Rulebook are the new transparency process that holds countries to account as they deliver on their targets, and a new framework for countries to exchange carbon credits through the UNFCCC.

Also, the Breakthrough Agenda was endorsed by 42 parties at COP26, which aims to inform policy-making through an assessment of global progress towards breakthroughs in areas including power, road transport, steel and hydrogen.

Put simply, these agreements will set up a global, independent verification system that will constantly monitor the progress governments make in meeting their targets. The leaders who attended COP26 will be watched to ensure that they deliver on their promises.

COP26 saw almost total agreement by richer nations on meeting their commitment to raise climate finance for poorer counties to $100bn per year by 2023. COP25 also agreed to tackle loss and damage and double global adaptation finance by 2025.

However, this is for long-term green finance requirements. IRENA has estimated that the world as whole will need $131 trillion of aggregate financing between 2021 and 2050 to meet 1.5°C. This equates to $4.4 trillion per year for the energy sector. For renewables alone, up to $1 trillion per year is needed, compared with $300bn of green investment in 2020.

The IRENA said that governments must maximise the amount and efficiency of public finance via supportive policies, redirect public capital from fossil fuels to energy transition-related technologies, and greater use of de-risking tools to mobilise private capital.

There is a need for a better tracking of global climate flows, including more transparent monitoring of amounts collected and disbursed, in order to ensure its most efficient and equitable use.

The green energy industry is expected to review the immediate impact of the Glasgow COP26 conference at the IRENA General Assembly in Abu Dhabi later in January.

The report warned that the world was still not on a climate-safe pathway, even though countries enhanced their NDCs and declared ambitious mitigation pledges such as net zero at COP26.

IRENA argues that renewable energy forms a key opportunity as a vehicle to deliver the needed emission reductions, as well as multiple Sustainable Development Goals (SDGs).

Governments, financial institutions and private sector entities must broaden their ambitions and make them commensurate with the scale of the climate threat, followed by real, short-term, accelerated implementation: a key feature of the Glasgow Climate Pact made at the COP26.

The energy crisis in Central and Eastern Europe has lost some of its bite after a mild winter and record LNG imports led to a slump in natural gas prices. The EU has made good progress in replacing Russian energy supplies.