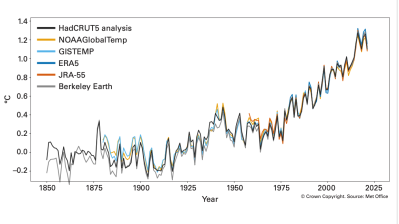 Human activity has caused irrevocable damage to the climate, causing hundreds of billions of dollars of economic damage and threatening water and food supplies to millions of people.

The WMO said this was yet another clear sign that human activities were causing planetary scale changes on land, in the ocean and in the atmosphere. This has harmful and long-lasting ramifications for sustainable development and ecosystems.

The most obvious sign of these changes is extreme weather, and the WMO’s State of the Global Climate in 2021 report, published together with the World Economic Forum, showed that the past seven years have been the warmest seven years on record. The average global temperature in 2021 was about 1.11 (± 0.13) °C above the pre-industrial level.

“It is just a matter of time before we see another warmest year on record,” said WMO Secretary-General Petteri Taalas.

“Our climate is changing before our eyes. The heat trapped by human-induced greenhouse gases will warm the planet for many generations to come. Sea level rise, ocean heat and acidification will continue for hundreds of years unless means to remove carbon from the atmosphere are invented. Some glaciers have reached the point of no return and this will have long-term repercussions in a world in which more than 2bn people already experience water stress.”

“Extreme weather has the most immediate impact on our daily lives. Years of investment in disaster preparedness means that we are better at saving lives, though economic losses are soaring. But much more needs to be done, as we are seeing with the drought emergency unfolding in the Horn of Africa, the recent deadly flooding in South Africa and the extreme heat in India and Pakistan,” he said.

The report matters because it will be used at COP27 in Egypt in November to help set future climate policy.

The global annual mean temperature in 2021 was around 1.11 ±0.13 °C above the 1850-1900 pre-industrial average, less warm than some recent years owing to cooling La Niña conditions at the start and end of the year. The most recent seven years, 2015 to 2021, are the seven warmest years on record.

At sea, the upper 2,000m depth of the ocean continued to warm in 2021 and it is expected that it will carry on doing so in the future – a change which is irreversible on centennial to millennial time scales.

He called for urgent action to grab the “low-hanging fruit” of transforming energy systems away from the “dead end” of fossil fuels.

He called for actions to jump-start the renewable energy transition. They include: greater access to renewable energy technology and supplies; a tripling of private and public investments in renewables; and an end to subsidies on fossil fuels, which amount to roughly $11mn per minute.

“Renewables are the only path to real energy security, stable power prices and sustainable employment opportunities. If we act together, the renewable energy transformation can be the peace project of the 21st century,” said Guterres.

The world must act in this decade to prevent ever worsening climate impacts and to keep the overall temperature increase to below 1.5°C above pre-industrial levels, he said.

Meanwhile, the oceans also saw higher levels of acidification. The ocean absorbs around 23% of the annual emissions of anthropogenic CO2 to the atmosphere. This reacts with seawater and leads to ocean acidification, which threatens organisms and ecosystem services, and hence food security, tourism and coastal protection. As the pH of the ocean decreases, its capacity to absorb CO2 from the atmosphere also declines. The IPCC concluded that “there is very high confidence that open ocean surface pH is now the lowest it has been for at least 26,000 years and current rates of pH change are unprecedented since at least that time.”

Global mean sea level also reached a new record high in 2021, after increasing at an average 4.5 mm per year over the period 2013-2021. This is more than double the rate of between 1993 and 2002 and is mainly due to the accelerated loss of ice mass from the ice sheets. This has major implications for hundreds of millions of coastal dwellers and increases vulnerability to tropical cyclones.

The world’s glaciers are also melting. Although the glaciological year 2020-2021 saw less melting than in recent years, there is a clear trend towards an acceleration of mass loss on multi-decadal timescales. On average, the world’s reference glaciers have thinned by 33.5 metres (ice-equivalent) since 1950, with 76% of this thinning since 1980. 2021 was a particularly punishing year for glaciers in Canada and the US Northwest, with record ice mass loss as a result of heatwaves and fires in June and July.

Greenland experienced an exceptional mid-August melt event and the first-ever recorded rainfall at Summit Station, the highest point on the ice sheet at an altitude of 3,216 m.

Exceptional heatwaves broke records across western North America and the Mediterranean. Death Valley, California reached 54.4 °C on 9 July, equalling a similar 2020 value as the highest recorded in the world since at least the 1930s, and Syracuse in Sicily reached 48.8 °C.

The drought in the Horn of Africa has intensified so far in 2022. Eastern Africa is facing the very real prospect that the rains will fail for a fourth consecutive season, causing Ethiopia, Kenya and Somalia to suffer a drought of a length not experienced in the last 40 years. Humanitarian agencies are warning of devastating impacts on people and livelihoods in the region.

Worsening humanitarian crises in 2021 have also led to a growing number of countries at risk of famine. Of the total number of undernourished people in 2020, more than half live in Asia (418mn) and a third in Africa (282mn).

Forced migration, or internal displacement, of people is also a threat, caused by what the report called hydrometeorological hazards.

Finally, ecosystems, including terrestrial, freshwater, coastal and marine ecosystems – and the services they provide – are affected by the changing climate and some are more vulnerable than others.

Some ecosystems are degrading at an unprecedented rate. For example, mountain ecosystems – the water towers of the world – are profoundly affected. Rising temperatures heighten the risk of irreversible loss of marine and coastal ecosystems, including seagrass meadows and kelp forest.

Coral reefs are especially vulnerable to climate change. They are projected to lose between 70% and 90% of their former coverage area at 1.5 °C of warming and over 99% at 2 °C. Between 20% and 90% of current coastal wetlands are at risk of being lost by the end of this century, depending on how fast sea levels rise. This will further compromise food provision, tourism and coastal protection, among other ecosystem services.

"As shown by the recent IPCC report, we already have the means and the know-how to cut emissions and limit global warming. We need to focus our efforts on bold policies and solutions that can quickly transform the way we produce and consume resources. People and partnerships have to be at the heart of our approach, whether it is to create new jobs, provide more access and affordability for everyone and to build a cleaner and greener living environment.”

Ukraine has been clear that it needs more weapons from the West. So, what’s the holdup?

Ukraine has been clear that it needs more weapons from the West. So, what’s the holdup?
White House doubles number of long-range rocket launchers sent to Ukraine in fresh aid package
bneGREEN: Reducing investment in fossil fuels can fund Europe’s energy transition

Europe’s electricity system could become greener, more secure and more resilient while not requiring any funding if the right investments are made to replace increasingly expensive fossil fuels.

An 8% rise in global energy investment in 2022 to $2.4 trillion, driven by a 12% rise in clean energy spending, is still far from enough to tackle the energy crisis and to put the world on the path to a greener and more secure energy future.

bneGREEN: Iran records one of the hottest days on Earth ever

World leaders distracted by multiple crises might like to spare a moment to take note of the city of Abadan’s experience of a brutally hot 52.2°C.

Temperatures in Europe broke through the 40°C mark in mid-June, stoking fears of record-breaking summer heat waves that could endanger lives and threaten food supplies whilst providing further proof of the effects of man-made global warming.

Russian climate activist Arshak Makichyan, a close associate of Greta Thunberg, is set to be deprived of his Russian citizenship as the Kremlin tightens the screw on anti-war protestors.