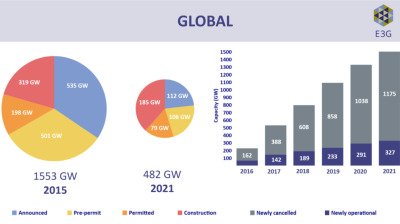 The reduction in size of the global coal project pipeline (left) and year-on-year tracking of projects that were cancelled or newly operational (right). / E3G
By By Richard Lockhart in Edinburgh September 16, 2021

The global pipeline of proposed coal power plants has collapsed by 76% since the Paris Agreement in 2015, bringing the end of new coal power construction into sight, new research by green think-tank E3G finds.

Around the world, a total of 1,175 GW of planned coal-fired power projects have been cancelled since 2015, while 44 governments – 27 in the OECD and EU, 17 elsewhere – have already committed to no new coal.

A further 40 countries – eight in the OECD and EU, 32 elsewhere –  are without any projects in the pre-construction pipeline and are in a position where they could readily commit to “no new coal.”

E3G’s No New Coal Report found that new government policies and sustained civil society opposition to coal has accelerated market trends away from the fuel.

“The collapse of the global coal pipeline and the rise of commitments to ‘no new coal’ are progressing hand in hand. Ahead of COP26, governments can collectively confirm their intention to move from coal to clean energy. The economics of coal have become increasingly uncompetitive in comparison to renewable energy, while the risk of stranded assets has increased. Governments can now act with confidence to commit to ‘no new coal,” said report author Chris Littlecott, associate director at E3G.

Indeed, any current keenness for coal is confined to Asia, with the study naming China, India, Vietnam, Indonesia, Turkey and Bangladesh as accounting for over 80% of the world’s coal pipeline.

The remaining pre-construction pipeline is spread across a further 31 countries, 16 of which have just one project.

With the OECD and EU, 56% of operating capacity has either closed since 2010 or is scheduled to shut by 2030, while the pipeline of proposed coal power plants in these countries has collapsed by 85% since 2015.

In this group, only Australia, Colombia, Mexico, Poland and Turkey still have coal projects, and are under pressure to follow their OECD and EU peers.

Among non-OECD countries (excluding China), the pre-construction pipeline has collapsed by 77% since 2015, with a cancellation ratio of over 5:1.

27 countries have ended the development of new coal power generation through project cancellations and/or policy commitments since 2015.

This shift away from coal is being reflected in governments’ political commitments, policy frameworks and NDC submissions, for example in Pakistan, Malaysia and Sri Lanka. They are serving as regional pathfinders that other countries can follow.

China alone is home to almost 53% of the capacity under construction and 55% of the pre-construction pipeline.

China has, however, seen a 74% reduction in the scale of its project pipeline, with 484 GW of cancellations since Paris in 2016.

President Xi has announced an intention that China will ‘strictly control’ new coal growth as part of long-term plans to achieve net zero by 2060.

However, this has yet to be reflected in sectoral Five-Year Plan (FYP) policies, the E3G report said.

An end to Chinese finance would facilitate the cancellation of over 40 GW of pipeline projects in 20 countries.

While welcome, the report identified Asian countries as maintaining their support for coal.

Global Energy Monitor said in June that the global coal industry was in fact chasing expansion, with 2.277bn tonnes per year (tpy) of new coal mining capacity currently under development, the equivalent of 30% of 2019 global output of 8.135bn tonnes.

The report said that China, Australia, India and Russia were the key drivers of coal expansion, accounting for 77% (1,750mn tpy) of development.

Sub-Saharan Africa has a pipeline of 15 GW (5% of the global total), down 47% since 2015. Over this period seven countries have fully scrapped their pipeline. This leaves 13 countries still considering coal, but with only South Africa and Zimbabwe currently constructing new plants.

Crucially, Chinese financial institutions are involved in 13 projects in eight countries, totalling 11.4 GW of planned capacity (76% of the total pipeline in the region).

However, cancelling such projects would help African countries to avoid locking themselves into an expensive and polluting energy source, and the risk of costly asset stranding.

For example, Kenya had abandoned the Chinese-backed 1,050-MW Lamu coal project after environmental campaigners fought the matter in court.

The Lamu project had originally been promoted as an alternative to expensive diesel-fired power. However, with falling costs for new wind and solar plants, coal can no longer undercut renewables in Africa and elsewhere.

Multilateral development banks (MDBs) such as the African Development Bank (AfDB) have also walked away from coal in the developing world.

Looking ahead, the E3G report stressed that coal expansion is now concentrated in just a handful of countries, meaning that action by just six of them could remove 82% of the remaining global pipeline of pre-construction projects.

China, because of its sheer size and because of its role as the last major source of coal financing, has a pivotal role to play in reducing’s coal’s importance in the global power industry.

If China followed its East Asian neighbours Japan and South Korea in ending overseas coal finance, it would facilitate the cancellation of over 40 GW of pipeline projects across 20 countries.

UN Secretary-General António Guterres said in August that there must be now new coal plants if the world is to meet its climate targets.

“This report must sound a death knell for coal and fossil fuels, before they destroy our planet. There must be no new coal plants built after 2021. OECD countries must phase out existing coal by 2030, with all others following suit by 2040. Countries should also end all new fossil fuel exploration and production, and shift fossil-fuel subsidies into renewable energy,” he said.

With Africa, Europe and much of Asia now moving away from coal, only China and parts of developing Asia are left promoting the fuel, while the science and political support is increasingly becoming against coal.