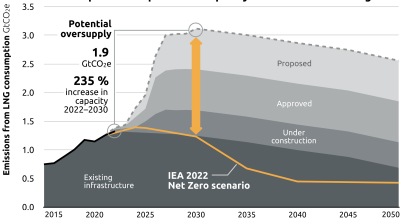 Emissions from future LNG projects and could use up 10% of the remaining global carbon budget for 1.5˚C warming by 2050, meaning that Europe’s current dash for gas to replace Russian supplies will make meeting the Paris Agreement targets almost impossible.
Africa is well-placed to monetise its gas reserves to fill Europe’s supply gas, even though this could lead to a rise in emissions and have a devastating impact on the climate.
CO2 emissions from all LNG under-construction, approved and proposed between 2021 and 2050 could add up to around 10% of the remaining global carbon budget for 1.5˚C warming by mid-century, new analysis from the Climate Action Tracker (CAT) warned.
The report warned that oversupply of LNG could reach 500mn tonnes per year (tpy) of LNG, equivalent to almost five times the EU’s 2021 Russian gas imports, and double total global Russian exports. This oversupply of fossil gas could lead to excess emissions of just under 2bn tpy of CO2, well above emission levels consistent with the IEA Net Zero by 2050 scenario (2022).
The warning comes as many African gas producers lobbied at COP27 in Egypt for output to rise in order to meet growing demand in Europe and to monetise their reserves to alleviate poverty in the continent.
Indeed, Africa is not getting the climate finance it needs from the developing world, meaning that the short-term fix of gas exports to a hungry Europe has its attractions.
Indeed, climate finance into Africa for 2020 was less than $30bn, or just 11% of its needs, out of the $277bn needed annually to meet the continent’s climate goals by 2030, said a new report released by the Climate Policy Initiative. The private sector supplied just 14% of this.
The report, entitled Climate Finance in Africa, called for an increase in funding for adaptation actions in Africa by six times the current funding, and mitigation by 13 times.
“The energy crisis has taken over the climate crisis, and our analysis shows proposed, approved and under construction LNG far exceeds what’s needed to replace Russian gas,” said Bill Hare, CEO of CAT partner organisation Climate Analytics.
“We’re witnessing a major push for expanded fossil gas LNG production and import capacity across the world – in Europe, Africa, North America, Asia and Australia – which could cause global emissions to breach dangerous levels. Increasing our reliance on fossil gas cannot be the solution to today’s climate and energy crises anywhere,” he added.
Gas is marginally more acceptable as a fuel, when compared to oil and coal, because of its status as a bridging fuel, an idea that is being used in Europe to raise LNG imports and allow investment in more import capacity.
“Unabated fossil gas is hardly embraced by the sustainability community as a ‘bridging fuel’ in the energy transition process. That role is also less needed as the International Energy Agency [IEA] recently concluded that natural gas demand reaches a plateau by the end of the decade in its scenario based on prevailing policy settings. That is earlier than recently anticipated as Russia’s invasion of Ukraine is accelerating a search for alternatives, such as renewables, coal and LNG. But more coal and LNG use can also delay the realisation of net-zero emissions,” said ING’s senior sector economist Gerben Hieminga and ESG researcher Coco Zhang.

Gas lobby
The LNG warning came as COP27 played host to a large and influential number of attendees from the fossil fuel industry.
Up to 636 fossil fuel lobbyists were registered to attend COP27, Global Witness said.
This is 100 lobbyists more than attended the Glasgow COP26 summit last year, the group said, lamenting what it described as “rise in the influence of the fossil fuel industry”.
There were more fossil fuel lobbyists than any single national delegation, Global Witness said, while the UAE registered 1,070 delegates compared with 176 last year. 70 of their delegation this year are classed as fossil fuel lobbyists.
Despite taking place in Africa, there are more fossil fuel lobbyists registered than any national delegation from the African continent.
“The extraordinary presence of this industry’s lobbyists at these talks is therefore a twisted joke at the expense of both people and planet,” said a spokesperson for Corporate Accountability, Corporate Europe Observatory (CEO) and Global Witness (GW) who analysed the COP27 attendee lists.
Meanwhile, CAT warned that global warming was unlikely to fall within the Paris Agreement’s 1.5˚C goals, and said that its forecast was unchanged over the past year,
Its annual projections for global warming were the same as at COP26 in Glasgow, as few governments have increased their 2030 emissions targets, made new net-zero commitments nor substantiated them.
Global Warming in 2100 will be 2.4˚C, the same as the CAT projected in Glasgow; including long-term net zero commitments would take it to 1.8˚C and the current policies pathway – a reflection of action on the ground – remains at 2.7˚C.
“With governments focusing on the energy crisis, this has been a year of little action on the climate: almost no updated national climate targets for 2030 and no significant increase in participation in Glasgow initiatives on coal phase-out, clean cars and methane,” said Niklas Höhne, of CAT partner organisation NewClimate Institute. “And without strong 2030 action, governments cannot reach net zero.”