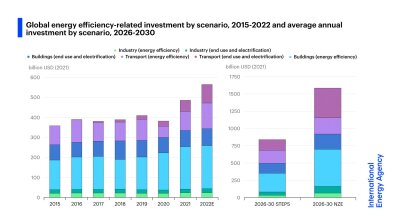 Global investment in energy efficiency could rise by 16% to $560bn in 2022, the International Energy Agency (IEA) said, as governments and consumers respond to fuel supply disruptions and record-high energy prices.

Investment has accelerated in 2022, according to preliminary data for the year, with the global economy using energy 2% more efficiently than it did in 2021, a rate of improvement of almost four times that of the past two years, and almost double the rate of the past five years.

COVID-19 led to two of the worst years ever for global energy efficiency progress, with annual gains falling to around 0.5% in 2020 and 2021. This indicates a potential turning point for the market segment after several years of slow progress, the IEA said.

However, this is still way short of what is required to reach net zero by 2050. Efficiency improvements need to average about 4% a year this decade to align with the IEA’s Net Zero Emissions by 2050 Scenario.

The IEA’s market report, called Energy Efficiency 2022, said that improvements in energy efficiency, such as building renovations, public transport and electric car infrastructure, means that total energy bills in IEA countries in 2022 are set to be $680bn less than they would have been otherwise, or around 15% of their total energy expenditure in 2022.

“The oil shocks of the 1970s led to a massive push by governments on energy efficiency, resulting in substantial improvements in the energy efficiency of cars, appliances and buildings,” said IEA Executive Director Fatih Birol.

“Amid today’s energy crisis, we are seeing signs that energy efficiency is once again being prioritised. Energy efficiency is essential for dealing with today’s crisis, with its huge potential to help tackle the challenges of energy affordability, energy security and climate change.”

Energy efficiency has been at the centre of policy initiatives by key governments worldwide. These include the Inflation Reduction Act (IRA) in the United States, the European Union’s REPowerEU plan and Japan’s Green Transformation (GX) programme.

Yet investment in efficiency must be spread more evenly across both developed and developing economies.

Such legislative packages, like much of energy efficiency investment more broadly, are concentrated in advanced economies, and much greater investment  is needed in emerging and developing economies, the report warned.

The IEA’s report builds on the recent pre-COP27 call by the UN’s World Meteorological Organisation (WMO) for spending on energy efficiency to form part of a tripling of annual renewable energy investment by 2030 if the world is to achieve net zero.

Meanwhile, deploying greater energy efficiency measures in buildings would reduce energy demand from housing stock in the long term and increase GDP by 0.7-1% in Europe in 2030-2050, Cambridge Economics, a think-tank, said in August.

As well as energy demand, domestic cooling and heating is a major source of CO2 emissions and an area ripe for decarbonisations if Europe is to meet its Fit for 55 emissions reduction goals and its 2050 net-zero ambitions.

Buildings account for 40% of the EU’s energy consumption, which is likely to continue growing unless immediate action is taken, Cambridge Econometrics said.

Part of the drive for greater energy efficiency, especially in the heating sector, centres on heat pumps, the IEA said on November 30 in a separate report, called The Future of Heat Pumps.

The report noted that heat pumps are a key technology that could contribute to the global energy transition while providing secure and sustainable sources of heat to commercial, industrial and domestic customers.

It would need $160bn per year of new investment by 2040 to reach announced climate pledges. However, these costs are outweighed by the economy-wide savings on fuel, especially if energy prices remain close to their current levels.

Heating buildings accounts for one-third of EU gas demand today, the IEA noted. Heat pumps could reduce that demand by nearly 7bn cubic metres in 2025, rising to at least 21 bcm by 2030 if EU climate targets are met.

Global sales rose by 13% in 2021, and a whopping 35% in the European Union alone, the IEA highlighted, while dubbing heat pumps the “central technology” for low-carbon heating. Almost 3mn heat pumps are set to be sold in 2022 in Europe alone, up from 1.5mn in 2019 and 2mn in 2021. Annual sales of heat pumps in the EU could climb to 7mn by 2030 if governments succeed in hitting their emissions reduction and energy security goals.

Heat pumps are important because the heating of most buildings around the world – such as homes, offices, schools and factories – still relies on fossil fuels, particularly natural gas.

Heat pumps are a hyper-efficient and climate-friendly solution, which help consumers save money on bills and enable countries to cut reliance on imported fossil fuels,

The IEA’s report said that heat pump market penetration was particularly high in cold countries, and predicted that the sector was on track for a record year in 2022.

The emergence of heat pumps forms just part of the actions that the construction industry needs to pursue in order to meet net zero emissions by 2050.

The IEA estimated that heat pumps have the potential to reduce global CO2 emissions by at least 500mn tonnes in 2030 – equal to the annual CO2 emissions of all cars in Europe today.

Opportunities exist also for heat pumps to provide low-temperature heat in industrial sectors, especially in the paper, food and chemicals industries. In Europe alone, 15 GW of heat pumps could be installed across 3,000 facilities in these three sectors, which have been hit hard by recent rises in natural gas prices.

bneGREEN: Most growth in power generation by 2050 will be solar and wind – BP
4 days ago
bneGREEN: Renewable energy was a hot topic in Davos but for Europe, much work remains
10 days ago
bneGREEN: Floods turn Drina river in Bosnia into floating landfill
13 days ago
Central Asia’s shorter winters are whittling away glaciers
18 days ago
bneGREEN: River of waste clogs Serbia’s Lake Potpec after heavy rains
19 days ago