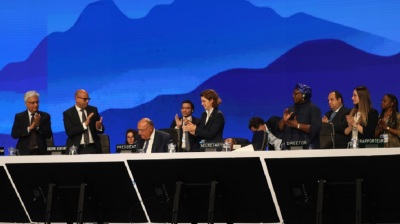 COP finished two days late on November 20 without any new agreements on climate change targets or emissions reductions, although a deal was hammered out to set up an as yet uncosted loss and damage fund.

The conference’s final communique reaffirmed the UN and governments’ desire to meet the 2015 Paris Agreement’s 1.5 degree goals, but did not make any new agreements that are binding on governments on how to it.

The most controversial move was the disappearance of any commitment to cause emissions to peak by 2025, while there was no mention of any general fossil fuel phase out.

There was no progress on coal in the document, called a cover decision, with the COP26 phrasing of a “phase down” being maintained, while fossil fuels subsidies should be “phased out,” again repeating the words of COP26 in Glasgow.

On the bright side, the UN stressed that there was an "urgent need for deep, rapid emissions cuts for 1.5C".

The UN said in a statement: “The package (of decisions) strengthened action by countries to cut greenhouse gas emissions and adapt to the inevitable impacts of climate change, as well as boosting the support of finance, technology and capacity building needed by developing countries.”

However, there were no high-level targets, merely a long list of reaffirmations by governments of existing commitment made in Glasgow.

But the goal of 1.5 degrees is still on the agenda, even though any deal on binding commitments will now have to wait until future COP conferences.

“The EU is united in our ambition to move forward and build on what we agreed in Glasgow,” Timmermans said, “Our message to partners is clear: We cannot accept that 1.5C dies here and today.”

Meanwhile, UK lead negotiator and president of COP26 Alok Sharma was extremely critical of the lack of progress at COP27, suggesting that a whole year had been wasted.

“The text right now does not go beyond Glasgow and it doesn’t even take us to Glasgow,” he said.

The document said that a 43% reduction in greenhouse gas (GHG) emissions was needed by 2030, relative to 2019 levels, if the world was to meet 1.5 degrees.

All this, apart from the loss and damage fund, is effectively a repeat of the final Glasgow decision, suggesting that COP27 failed to make any real progress and that powerful interests in Asia and the Middle East again managed to stymie any improved targets for coal or emissions.

Put simply, the fight for 1.5 degrees has not yet been won and the battle must go on.

The UN stressed in its final statement that the most significant achievement was on loss and damage.

“This outcome moves us forward,” said Simon Stiell, UN Climate Change Executive Secretary. “We have determined a way forward on a decades-long conversation on funding for loss and damage – deliberating over how we address the impacts on communities whose lives and livelihoods have been ruined by the very worst impacts of climate change.”

A new Transitional Committee is to be set up to recommend how to implement both the new funding arrangements and the fund at COP28 next year. However, there was no mention of how much sash the fund would contain.

The good news is that the loss and damage fund will take on the recommendations of the Santiago Network for Loss and Damage, which lay out what developing countries need to repair the adverse effect of climate change that have already happened, such as floods, droughts, poor harvests, rising sea levels and extreme weather.

The UN also said that governments have agreed to push Adaption up the agenda at COP28 in a bid to improve resilience amongst the most vulnerable countries.

Adaption means investing in infrastructure to prevent disaster climate change that have yet to happen. New pledges, totalling more than $230mn, were made to the Adaptation Fund at COP27 as part of the grandly named Sharm el-Sheikh Adaptation Agenda. These pledges will help many more vulnerable communities adapt to climate change through concrete adaptation solutions.

There was also a commitment to double the annual spending on adaption from $20bn per year at present to $40bn.

EU President Ursula von der Leyen was lukewarm in welcoming the final COP27 decision, saying: “COP27 marks a small step towards climate justice but much more is needed for the planet. We have treated some of the symptoms but not cured the patient from its fever.”

“COP27 has kept alive the goal of 1.5C. Unfortunately, however, it has not delivered on a commitment by the world's major emitters to phase down fossil fuels, nor new commitments on climate mitigation,” she lamented.

Perhaps the biggest scandal of COP27 was the target of $100bn per year of climate finance flowing from the developed world to developing economies has still not been met, and there was no commitment to finally meet this target.

The final document did say that $4 trillion per year was needed to invested in renewable energy by 2030 if the world is to have any chance of reaching net zero emissions by 2050. Meanwhile, a global transformation to a low-carbon economy is expected to require investment of at least $4-6 trillion per year. Again, these are merely aspirational targets, and there was no detail of how to raise this money.

Fossil fuels are still being treated softly, with only coal to be phased down. The final cover document refers to boosting “low-emission energy systems,” as well as “clean power generation and energy efficiency measures.” It does not single out oil or gas, allowing countries to continue to invest in fossil fuels as long as they use clean technology, which effectively means various bits of kit that can reduce emissions, such as better flue technology at power stations and more efficient petrol engines for cars.

All in all, the language of the final COP27 deal was stronger and more forceful than at COP26, but the agreement was still as toothless as in Glasgow, with no progress on winding down consumption of coal or other fossil fuels.

The world now moves forward to COP28 in Abu Dhabi, where a key event will be the First Global Stocktake, which will independently evaluate the progress made by then in implementing the 2015 Paris Agreement. COP27 will probably not receive the most glowing assessment.

Artel pioneers ESG in Uzbekistan
bneGREEN: Most growth in power generation by 2050 will be solar and wind – BP
PANNIER: Uzbeks, Kyrgyz cooperating to level unthinkable 10 years ago

bneGREEN: Most growth in power generation by 2050 will be solar and wind – BP
1 day ago
bneGREEN: Renewable energy was a hot topic in Davos but for Europe, much work remains
8 days ago
bneGREEN: Floods turn Drina river in Bosnia into floating landfill
10 days ago
Central Asia’s shorter winters are whittling away glaciers
16 days ago
bneGREEN: River of waste clogs Serbia’s Lake Potpec after heavy rains
17 days ago