BEYOND THE BOSPORUS: Turkey shakes off reality in the pursuit of single-digit inflation 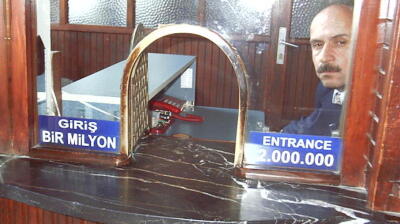 Old Turkish lira entrance prices given as one million and two million lira. Six zeroes were dropped from the assailed currency in 2005.
By Akin Nazli in Belgrade November 22, 2020

Turkey’s main target is to reduce inflation to single digits as soon as possible, then to take it to the medium-term target levels and to ensure that interest rates come down in line with this process, Turkish President Recep Tayyip Erdogan said on November 20.

Turkey's released official inflation figures have constantly fallen in the narrow 11-12% band since November 2019, with the figures staying within the even narrower band of 11.75-11.89% since July.

It is plain as day that Turkey’s official figures across all fields do not stand up to scrutiny. They do not reflect reality. However, the finance industry and the mainstream media continue to report the data without objection.

Take the country’s coronavirus (COVID-19) figures as a worrying example. The numbers were absurdly low for months. Then, after some opposition detective work partly exposed the wide difference between the official picture and the true extent of the coronavirus outbreak in the country, the health minister, possibly with a slip of the tongue, confirmed officials do not include asymptomatic cases in their daily virus bulletin (even though people with such cases can spread the virus). And that confession came after the summer tourism season was over and done with. For many tourists, the damage was done. It’s a startling controversy (though mainly for outside observers, Turks are quite used to these goings-on), yet even now you see news agency reports relaying the official data with no mention of the uselessness of the figures confirmed by the minister’s admission.

As for interest rates, Erdogan has now given the finance industry the goods, permitting a chunky rate hike. Expect officials to now unveil inflation figures that are conveniently behaving and expect the market to buy the story.

The new Central Bank of the Republic of Turkey (CBRT) governor, Naci Agbal, and the new finance minister, Lutfi Elvan, are making all the right noises about stabilising the lira and bringing inflation down to single digits, The Economist commented on November 21.

However, following the rate hike, we, and especially those who have already bought all the “right noises”, can be invited by officials to imagine a scenario in which there is a sharp adjustment in demand due to the monetary tightening.

Although we are not dealing here with realities but with the discourse produced to drive the market, people in the real economy should remind themselves that inflation in Turkey is not driven by demand. It is cost side inflation and it is sticky.

Manufacturers have ramped up their raw material and intermediary goods imports in recent months due to concerns over rising import prices. According to the theory spread by officials, these firms will cut their prices now following the rate hike.

There is also talk of “fiscal policies that complement monetary policy”. Turkey has been claiming increases in its tax income across recent months amid the pandemic and lockdowns. It can release even higher increases in the coming months.

If we choose to take everything being said right now by the Erdogan administration about the economic data as entirely correct, what do we see? We see that Turkey’s official CPI index is shaping to deliver the desired journey into single digits from as early as November.

If the halving strategy continues in the following months, single-digit inflation will arrive in March.

However, a story of “demand adjustment strengthening starting from December” may see the sought after outcome arrive as early as January.

So, if it is assumed that Erdogan will be convinced to not push his luck too much, Turkey may enter into a rate-cutting cycle around March or April, ceteris paribus.

However, the crushing poverty felt in Turkey may push Erdogan to call for the ‘achievement’ of single-digit inflation and rate cuts even earlier.

For all the recent talk of reforms, Erdogan is not about to loosen his grip on the national institutions, give up on growth or stop tormenting opponents, The Economist also noted.

As another redistributor of the “from tightening to lower inflation” story, Fitch Ratings, the most generous grader of Erdogan’s Turkey, said on November 20 that the policy tightening would provide some support to the external position, as well as disinflation prospects.

Lira weakness contributed to high inflation, which was 11.9% in October, and increased inflation expectations, according to Fitch.

Isn’t it terrific that Turkey’s currency can depreciate by 50% while its inflation rises by only 12%, even though the country has an import-dependent economy.

The sacking of two central bank governors in the past 16 months underlines the regulator’s lack of independence from political pressure, and Erdogan has continued to state his opposition to higher interest rates, according to Fitch.

“We noted the possibility of an improvement in monetary policy credibility when Naci Agbal was appointed CBRT governor on 7 November. The lira has appreciated by nearly 11% since his appointment and that of Lutfi Elvan as Finance Minister,” the rating agency also noted.

Beyond inconsistencies in Fitch’s views (Is the sacking of the central bank governors positive or negative for the monetary authority’s credibility? Sure, it is a stupid question under normal conditions, but it is what we are dealing with thanks to the Erdogan & Finance Industry Co.), it seems the rating agency has become a provider of investment advice. If it thinks it can handle Turkey, perhaps it should next move into sports and horse racing betting punditry.

BEYOND THE BOSPORUS: Let’s tentatively pencil in a date for Turkey’s hot money outflow

BEYOND THE BOSPORUS: Pa! Sanctions, schmanctions!