BEYOND THE BOSPORUS: Erdogan swallows humble pie and bitter pill as market gets its rate hike but watch for sleights of hand 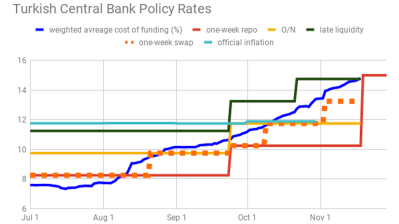 The end of another corridor adventure arrived within four months.
By Akin Nazli in Belgrade November 19, 2020

Humble pie and a bitter pill were on the menu for Recep Tayyip ‘Erdoganomic’ Erdogan on November 19 and the Turkish despot swallowed both as Turkey’s central bank bowed to market realities by announcing a hike in its main policy rate (the one-week repo) by 475bp to 15%. As will be explained, however, behind the scenes sleights of hand will be made to ease the indigestion that, while shielding the beleaguered Turkish lira, threatens to constrain already fragile economic growth.

Funding will be provided through the main policy rate, said the central bank—as it seemingly moved a couple of steps out of the shadow of a president who has often forbidden rate hikes, offering his absurd argument that they propel inflation—in a remark suggesting that yet again the market ends up taking what it wanted after another chapter of futile manoeuvering by the regulator at the end of a leash that stretches back to the presidential palace.

The end of the central bank’s rate corridor will be sold as “normalisation” and as the national lender getting back to orthodox monetary policy, but the devil remains in the detail—the central bank funds the banking system mainly through USD-TRY swaps conducted with local banks.

The central bank’s one-week swap rate has stood at 13.25% since November 3, but much bigger funding is provided at lower costs.

As a result, the banks’ swaps with the central bank declined and the central bank’s net international reserves fell to $16.4bn—the lowest level recorded since 2004—as of November 13 from $19.6bn a week earlier.

Developments in the central bank’s short FX position and the rising lira liquidity in London will be watched in the coming period as observers weigh up the lira’s short-term destiny.

Turkey’s ongoing monetary tightening started via backdoor moves in mid-July that were unable to stop the lira crashing into a second currency crisis within just over two years. The impact of the tightening on deposit and loan rates and on loan flows and FX deposits will also be tracked in the coming period in relation to the macroeconomic direction.

However, the market—which essentially took back control of Turkey’s economy and the lira from November 9 after Erdogan’s weekend change of course led to him firing the central bank governor and accepting the resignation of his son-in-law finance minister—is not interested in the real economic direction but in the short-term gains to be had.

And who are we to argue with the course of the market? But let’s update the list of possible headaches ahead as the risk of the central bank not delivering on rate hike expectations is out of the picture now.

1-) Mercurial Erdogan can start talking in the wrong direction at any time and the market-makers can’t avoid the shower of manure that might follow.

Markets took it on the chin but some magical invisible hands held up the lira. Beware though, the Dear Leader could speak out again at any time.

We’re going through the end of November and many people will close their positions before the Christmas break.

The US Congress or courts could no doubt make trouble at any given moment over Ankara’s Russian S-400 missiles and the Halkbank indictment on dodging Iran sanctions.

The coronavirus situation in Turkey and in Europe is starting to produce some chilling statistics but it seems historians looking for signature events of our times will be looking back trying to reconcile rallying markets with soaring death rates.

5-) Erdogan plans to keep pumping lira into the domestic market and that in turn will keep domestic FX and gold demand alive.

The balance between domestic demand and portfolio inflows accompanied by such moves as ending the central bank’s gold purchases makes for a delicate path, just like the attempts at absorbing rising lira liquidity in London by increasing local banks’ USD available in exchange for TRY.

6-) Will domestic political stress be curbed as Biden takes a leader he has described as an “autocrat” under his wing or might Washington push for too big a bargain that would cause Erdogan too much of a loss of face? There is nothing as yet to suggest Biden will not agree compromises acceptable to Ankara.

7-) Turkey is nothing if not capable of throwing up surprises out of thin air.

BEYOND THE BOSPORUS: Let’s tentatively pencil in a date for Turkey’s hot money outflow

BEYOND THE BOSPORUS: Pa! Sanctions, schmanctions!