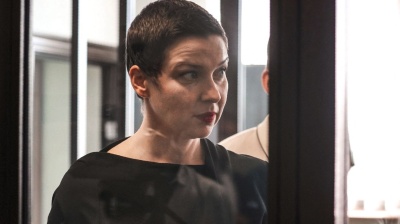 Belarusian opposition leader Maria Kolesnikova talked to Dozhd ahead of her trial on charges of attempting a coup that carries up to 12 years of jail time if she is convicted.
By bne IntelliNews August 5, 2021

The trial of Belarusian opposition leader Maria Kolesnikova started on August 4 where she is charged with attempting a coup d'état and faces up to 12 years in jail if convicted in what she claims is a politically motivated case.

Out of the three women – Svetlana Tikhanovskaya, Veronika Tsepkalo and Maria Kolesnikova – that campaigned against the incumbent President Alexander Lukashenko in the disputed August 9 presidential elections last year, she was the only one to remain in the country.

She was snatched from the street a year ago and the authorities attempted to expel her from the country but she ripped up her passport on the Ukrainian border. Security officers were forced to return her to Minsk, where she was jailed and eventually charged.

She is on trial this week along with opposition lawyer Maxim Znak and both of them are prominent members of the Coordinating Council that was set up to represent the opposition forces in talks with the Lukashenko regime.

The exact content of the charges against the two defendants remains unknown and the trial is taking place behind closed doors. Before the start of the hearing on Wednesday, Maria Kolesnikova danced inside the courtroom cage and made her trademark heart sign with her hands – one of the symbols of the opposition movement.

The independent Russian television network Dozhd interviewed Kolesnikova ahead of her trial. Here’s what she said, in brief, as cited by Meduza.

“The charges against Maxim Znak and I are absurd. The current Belarusian government is a “gang of dastardly, cowardly scammers.” They proposed that I “act in a film à la Roman Protasevich.” I replied that I would tell the whole truth about my abduction, the investigation and the lawlessness in the pre-trial detention centre. I will not write an appeal for clemency because I am not guilty. I don’t judge those who co-operate with the authorities [to secure their release] – everyone makes their own choice. Viktor Babariko received a harsh sentence because they’re afraid of him. All of the talk about Russia’s support is smoke and mirrors. But it’s easier for Lukashenko to go crawling on his knees for “support” than to end the stand-off in Belarus. Apparently he forgot that he’s not living with Vladimir Putin, but with the Belarusian people. The sanctions are important because Belarusians must feel that they aren’t alone in a situation of terror. Having stayed in the country after the elections, I knew it wouldn’t be easy. On the day of my arrest, I wasn’t sure I would survive. I don’t regret a thing. I think that tearing up my passport was the right decision.”

US warns Belarus to keep its commitment to neutrality

Who are the group responsible for last week's hacker attack against Ukrainian websites?

The UN’s civil aviation agency (ICAO) is not convinced by the Belarusian authorities' explanations
US warns Belarus to keep its commitment to neutrality
Who are the group responsible for last week's hacker attack against Ukrainian websites?