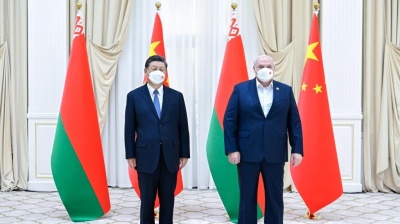 Belarusian strongman Alexander Lukashenko with Chinese President Xi Jinping at the signing of their "All-weather Strategic Partnership" in during the SCO meeting in Samarkand last week. / https://english.news.cn/
By bne IntelliNews September 30, 2022

While Minsk has always been happy to increase trade relations with its Chinese partner it has been much more eager to increase co-operation with Beijing since 2020. This of course has obvious reasons.

After having made itself into a pariah state with the West, the Minsk regime only had the Kremlin to count on. However, as Belarus’ Foreign Minister Vladimir Makei said in New York during the recent UNGA meeting, “Belarus would like to diversify its economy and politics,” and since the EU isn’t interested, Belarus is turning to China.

On July 15 this year Belarus formally applied for membership into the SCO. While meeting with the SCO’s Secretary-General on September 15, Belarusian strongman Alexander Lukashenko told him that Belarus’ “political and economic future, possibly the military political future, lie there.” Belarus’ application was quickly approved by the other member states during the SCO summit in Samarkand, and a few days later Lukashenko stated that he wants the Belarusian ministries to have made the country ready to join the SCO within a year.

On the sidelines of the SCO summit, Lukashenko also signed an “all-weather strategic partnership” with Xi Jinping and thanked him for his support in “these difficult times.” Shortly after, several Belarusian and Chinese ministries signed various memoranda and co-operation documents.

Officially and quite obviously Belarus' interests in an “all-weather strategic partnership” with China and the accession to the SCO lie in its need for using Chinese railway routes to both reach its existing and to establish new trade routes with East, South and Central Asian markets.

Despite many exporters being afraid of using the BRI’s Northern corridor (which goes through Russia and then to Finland or via Belarus to Poland), Belarus has no other choice but to put all of its cards on keeping China’s BRI route alive.

It’s important to remember that Belarus is landlocked, and while railways and trucks have therefore always been extremely vital for Belarusian exports, their importance has increased immensely since Belarus lost access to Baltic and Ukrainian ports this year.

As bne IntelliNews has reported on previously, the freight value of Belarus’ state-owned railway company Belarusian Railways has decreased rapidly between January-September this year; additionally, Belarus’ turn towards Chinese land routes for its exports and imports might be used help Belarus to acquire parallel imports.

In an interview with the Chinese state media outlet Global Times, Belarus’ ambassador to China Yuri Senko as usual applauded the stark increase in China-Belarus bilateral trade and emphasised Belarus’ importance as a node in Chinese-EU trade.

When asked about the complementarity of China and Belarus, Chinese investments in Belarus and bilateral imports and exports, Senko explained what can be understood as the cornerstones of Belarus-China economic relations.

As bne IntelliNews reported on previously, Belarus’ use of food exports to China to boost its foreign currency earnings could be exacerbating domestic food inflation within the country. Nevertheless, this doesn’t seem to bother Senko, who praised Belarusian agricultural exports to China and added how Belarus’ technology imports from China create “high-tech, innovative, resource-saving, ‘smart’ agriculture.”

Belarus is also trying to tie other export sectors into its economic co-operation with China such as acquiring Chinese investment into its mining sector and exporting wood products to China from its sanctions-pressed wood industry.

In fact things might not be looking too good on these fronts. Last year, China cancelled the second loan tranche to a Belarusian mining and processing complex worth around $580mn; when it comes to Belarus’ wood industry, Belarusian producers' loss of the right to use FSC certification is projected to create problems with Chinese importers.

What is clear is that the Belarus-China trade relationship mainly consists of Belarusian high-tech imports from China and low-tech exports to China. This becomes even more evident when one looks at the trade balance between the two nations, whereas Senko is always careful only to mention total bilateral trade. According to UN COMTRADE data, Belarus’ monthly trade balance (in US dollars) with China looked like this in 2021:

For Belarus, its trade with China is a way to help the economy stay afloat and to also move into slightly higher value-chains and increase its international competitiveness. The only problem is that if Belarus is dependent on Chinese tech, it won’t ever outcompete either China or the hundreds of other countries also importing Chinese tech for its manufacturing industries.

Moreover, it’s clear that the Western sanctions on dual good exports to Belarus is taking a heavy toll on its domestic industry and likely creating large problems for intra-industry trade within Belarus, which is why Minsk is grabbing a straw to increase its imports of components and machine-tech from China.

To sum up, Lukashenko is trying desperately to balance out Belarus’ dependence vis a vis Russia as much as possible, since Putin is probably asking him for more than he is willing to give into. In an attempt to secure foreign direct investments, technological knowhow, component imports and gain preferable access to China’s large domestic market as well as to the land trade-route networks that China controls, Lukashenko has decided to take the next step to become a part of the “Shanghai Family” as he called it.

While this is unlikely to have any major structural effects for the Belarusian economy, it will probably help to keep its manufacturing industry running and provide Minsk with some extra export revenue.