Belarus is running out of cash 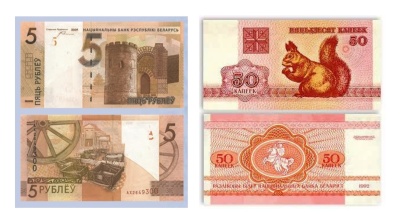 Belarus has some $8bn in reserves but that is only enough to pay for 2.5 months of imports, less than economists say is necessary to maintain the stability of the national currency
By Ben Aris in Berlin August 27, 2020

ATMs in Minsk are empty as the population scrambles to convert their Belarusian rubles in to dollars in the expectation of yet another economic crisis.

“There is essentially no hard currency neither in ATMs, nor in currency exchange points in #Minsk today. Have to wait for hours or to come at time of opening to buy small amount,” tweeted the Belgian reporter Denis Kazakiezicz. “The only way to withdraw deposit in foreign currency from a bank is to order in advance.”

As bne IntelliNews reported, the Belarusian ruble has been falling precipitously in the last few weeks and dropped towards a record low against the dollar on August 24 due to mounting fears the showdown between the people and self-appointed President Alexander Lukashenko could drag on for months and cause an economic crisis.

“The Belarusian ruble is falling into an abyss. Banks sell the ruble for 3 rubles per dollar already. A couple of days ago it was 2.5 rubles. Some bloggers advise Lukashenka how to deal with the ruble exchange rate: "Try beating it with truncheons and stun grenades.",” tweeted Franak Viacorka, a local journalist in Belarus.

The banking sector is also reportedly already in trouble, according to unconfirmed reports.

“Banking experts say that most banks already now experiencing liquidity shortages and stopped providing credits. Lots of businesses (20%-40%, depending on sector) currently lack money for the revenue… And record volumes of USD trade was set in these three days on exchange,” tweeted Ihar Filipau, a Belarusian observer based in Germany.

According to other reports, Lukashenko has already requested $1.6bn from Russian President Vladimir Putin as an emergency loan to prop up the economy and the currency. One billion seems to have already been agreed.

“We agreed with the president of Russia that the we will receive $1bn. It will be good for the support of our national currency,” Lukashenko said, as cited by RBK on August 27.

The Russian budget already has a $600mn loan to Belarus in the current budget that was approved at the end of last year but never released, as the Kremlin was using it as leverage over Minsk during the talks over cutting energy subsidies. Minsk was banking on that money to refinance existing debt and its failure to appear put the government under pressure; the Ministry of Finance told bne IntelliNews in March last year that it had no intention of raising more money on the international capital markets, but changed its mind when the Russian loan failed to appear. Now if Putin choses to help Lukashenko then this $600mn could be rapidly deployed.

And the ruble was already unstable before the protests began. The country’s foreign exchange reserves were $7.9bn in May, following a 1.2% month-on-month drop in April, the National Bank of Belarus (NBB) reported on June 5. That’s only 2.5 months worth of import cover, when economists agree that the minimum a country needs to have in order to maintain the stability of the national currency is three months.

Reserves were bolstered in June when the Ministry of Finance placed $1.25bn of US dollar-denominated Eurobonds – a five-year tranche worth $500mn at 6.125% and a 10-year tranche amounting to $750mn at 6.375% – adding much-needed cash to the stockpile. Of Belarus’ reserves only $4.3bn are in cash, with another $3bn in gold and a final $1.5bn in assorted assets and other currencies.

According to some reports, protesters are actively withdrawing their savings in dollars not just because they are worried about devaluation, but purposely to cause instability as another way of exerting pressure on the state and forcing Lukashenko to resign after he massively falsified the August 9 presidential election in his favour.

Pro-EU opposition has its best-ever shot at winning the presidency in Moldova
1 day ago
Zelenskiy scrambles to defuse anti-corruption crisis of confidence in his government
18 hours ago
Lukashenko closes borders, sends top aides to western regions to face down faux NATO threat
1 day ago
Sofia streets empty as most of Bulgaria put in coronavirus “red zone”
1 day ago
Russian residential real estate developer Samolet Group IPOs at a price of RUB950 per share
1 day ago