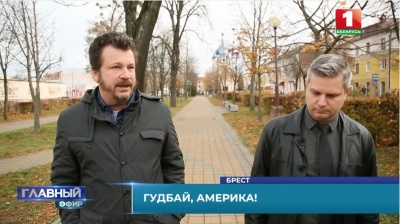 On Tuesday, March 22, the Belarusian authorities granted asylum to US citizen Evan Neumann, who is wanted by the FBI. In a video released by Belarusian media on Tuesday, Neumann was seen signing a document before shaking hands with a police officer, upon which he was told that he was “completely under the protection of the Republic of Belarus”.

In Neumann’s own words he had “mixed feelings”, saying that “I am glad Belarus took care of me. I am upset to find myself in a situation where I have problems in my own country.”

Evan Neumann participated in the storming of the US Capitol building on January 6, 2021. He is described by the FBI as “still at large” and has six charges against him, including assault on an officer and civil disobedience; both are felonies.

Neumann first appeared on Belarusian TV in November last year. He had illegally crossed the border from Ukraine in August and been detained by Belarusian border guards. According to Neumann he first fled from the FBI to Ukraine and rented an apartment in the Ukrainian city of Zhytomyr. He then decided to flee to Belarus after noticing that he was being followed by the Ukrainian security service. In an interview, Neumann claimed that he had to go “through swampy forest land and dodging wild boars and snakes” in order to reach Belarus.

The Belarusian state media have tried to make the case look like a benevolent and free Belarus saved a politically persecuted American, and the Belarusian regime to be able to accuse the US of double standards when it comes to political persecution.

Over 35,000 people have been imprisoned in Belarus since the country’s regime began its brutal crackdown on the opposition after the fraudulent 2020 elections. During its blind political persecution, the regime has both forced the landing of a passenger plane from Greece bound for Vilnius and persecuted the country’s Polish minority.

In spring last year, several representatives of the Union of Poles (ZPB) in Belarus were arrested by Belarusian authorities, among them the president of the ZPB, Andżelika Borys. Borys was charged with “inciting hatred” and “rehabilitating Nazism” for commemorating Polish anti-Soviet partisans whom the Belarusian regime claimed were Nazis; she faces up to 12 years in prison.

In June last year, three members of the ZPB were released from Belarusian jail and deported to Poland. However, Borys remained in jail along with senior ZPB member Andrzej Poczobut.

The EU has previously called for Borys’ and other political prisoner’s immediate and unconditional release. Western authorities became increasingly worried in October last year when reports appeared of Borys being in a critical state of health.

Borys’ arrest had been continually extended on a three-month basis up until last week, when she was released. According to the Polish Ministry for Foreign Affairs she was feeling “quite well” and needed rest, but that the MFA was in contact with her.

On March 23, the Polish foreign minister appealed to the Belarusian authorities for her unconditional release and of Poczobut, who is still in jail.

On Monday, March 28 starts the hearing of Russian citizen Sofia Sapega at the Grodno Regional Court. Sapega was arrested along with her partner Roman Protasevich on the 23 May last year after Belarusian authorities forced the landing of the passenger plane they were on, which was flying over Belarus towards Vilnius.

Both have been awaiting trial since then, and last summer they were both moved from jail to house arrest. Shortly after their arrest, both were featured on “confession”-videos released by the Belarusian security forces, in the videos Protasevitch appeared to have been beaten.

The forced landing of the passenger flight caused international outrage and led to heavily increased sanctions against the Belarusian regime. The Belarusian regime denied allegations that it forced the plane down only to arrest Sapega and Pratasevich and tried to cover itself behind the investigation of the UN Civil Aviation Council into the matter.

However, after over half a year the investigation committee was unhappy with the information provided by the Belarusian regime, and the final report did not vindicate Minsk from the allegations made by the international community.

This event showed the whole world what Minsk was capable of in its persecution of political dissidents. Perhaps only the Belarusian regime itself and its strongest loyalists believe its recent attempt to appear as a haven for people being “politically persecuted” in the West.

The rest of the world is focused on the current political prisoners in Belarus and human rights watchers are waiting to see what will happen to Sapega in the coming months, as she faces up to six years in prison.