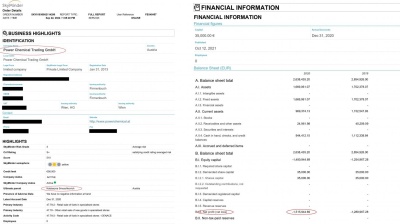 Despite having come under EU sanctions in late 2020 for being the “oil money man” of Belarusian strongman Alexander Lukashenko, Mikalai Varabei and his family have somehow managed to preserve some of their riches in the EU. This was revealed in a new investigation by the Belarusian Investigative Centre (BIC) and the Dossier.

Mikalai Varabei is a Belarusian businessman who rose to prominence during the 2010’s as the co-owner of the Belarusian company Interservis, which ran trade schemes on the re-exportation of Russian petroleum products in the early 2010’s. Russian petroleum products were deliberately classified as “solvents” and “thinners” so that they could be exported through a legal loophole into the EU, thereby evading the export duties of Russia’s and Belarus’ joint Customs Union. When this scheme was revealed, Russia demanded $1.5bn in compensation from Belarus until Minsk somehow managed to ease tensions.

In 2014, Interservis also bought other major Belarusian companies such as Absolutbank, the Bitumen Refinery in the Minsk region, and increased its share in the Amkodor Machinery factory. Later on, Varabei and his partner Aliaksandr Shakutsin divided the assets between themselves.

Like many other Russian and Belarusian oligarchs and government officials, Varabei and his family have frequently visited Western Europe and when Varabei came under EU sanctions from the West, his wife’s and daughter’s property ownership came in handy.

The family’s largest property is a chalet in the South-Eastern Austrian region of Carinthia. The property is not just a 300-square-metre palace, but also contains 19,000 square metres of meadows, forests and gardens.

Formally the company “Power Chemical Trading” owns the estate. However, the owner of the company is Varabei’s daughter Katsiaryna Smuschkovich. Katisaryna had taken control of the company from her father who in turn had purchased it from Maximilian Christoph von Habsburg-Lothringen.

The firm’s own documents show that it has had no more than 1 employee since its founding. In 2020 its financial result was a net loss of €1.5mn, so this gives strong indications to it being a shell company only created to own and service the estate.

Neither Tamara nor Katsiaryna have held jobs where they’ve earned enough to buy either one of these apartments. Tamara Varabei was earning $35,000 annually while working at Varabei’s company Interservis and Avtoimport, the latter which she owned jointly with her husband. Katsiaryna was for many years an employee of Devana Services, a tour operator helping European hunters to try their luck in the forests around Varabei’s Belarusian resort of Krasny Bor.

Besides their estates, Tamara and Katsiaryna have no shortage of spending money as they can be seen showing off their various brands of clothes, handbags and earrings worth tens to hundreds of thousands of dollars on social media. We can only guess where the money came from, but it is likely that they have been taken out of Varabei’s various companies.

Maximilian Christoph von Habsburg-Lothringen, from whom Varabei bought the Power Chemical Trading company, is a well-known Austrian businessman and is the president of the Austrian-Russian Friendship Society (ORFG) and therefore has close connections with Russian business and government officials.

Founded in 2000 by Florian Stermann, according to one of BIC’s sources the ORFG is “very infamous” for having a wide arrange of connections with foreign intelligence services such as Russia’s GRU and has been the focus of Western intelligence services for some time. Also a part of the ORFG was Austrian businessman Jan Marsalek, a man with “mysterious” foreign intelligence connections in both Libya, Russia and Austria, according to a German investigative journalist.

Together, Stermann and Marsalek ran a German-based internet payment company called Wirecard. In 2020, when a huge hole worth a couple of billion dollars was revealed in the company, Marsalek disappeared. His last trip was in fact to Belarus from where he probably made his way straight over to Russia to seek protection with his Russian intelligence connections.

The former Russian oligarch Jacob Golodovsky today owns an Austrian investment company named Petrochemical Holding. However, 20 years ago he used to own Russia’s largest petrochemical holding Sibur but sold all of his Russian assents to Gazprom and relocated to Austria after having been released from prison in Russia. In an interview from 2005 with Russian newspaper Vedomosti, Golodovsky said that his relocation to Vienna was “not without the help” of his “Austria-based Belarusian business partners,” a possible reference to the Varbei family.

Furthermore, Katsiaryna changed her last name to Smuschkovich when she married Ewgeni Smuschkovich in 2017. Ewgeni was then heading the Russian, Central and Eastern European arm of the Swiss investment bank Julius Baer. In 2022, Ewgeni was forced to resign from Julius Baer with the official reason being “to protect the bank”; however, BIC is certain that this resignation should be understood in the context of the sanctions against Ewgeni’s father-in-law Mikalai Varabei and his connections to the Ukrainian oligarch and politician Viktor Medvedchuk.

This investigation by BIC and Dossier further highlights the intimate financial but also security service connections between Russia, Western countries and the people in “Lukashenko’s wallet” such as the Varabei family.

What does 2023 hold for Belarusian potash exports?

VISEGRAD BLOG: When Eastern European states speak out they are now listened to
Trial begins in Belarus against exiled opposition figures
What does 2023 hold for Belarusian potash exports?