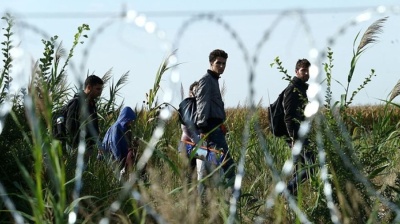 Acceptance of migrants has declined worldwide, and the nations of the Western Balkans that bore the brunt of the 2015-2016 migration crisis are now the least tolerant in the world, a new Gallup poll shows.

Globally, countries have become somewhat less accepting of migrants than they were three years ago, shows the latest update of Gallup's Migrant Acceptance Index, which declined from 5.34 to 5.21 during that period. The index, on a scale of 0 to 9, gauges people's acceptance of migrants based on increasing degrees of personal proximity to migrants.

North Macedonia is the least accepting country with a score of just 1.49 on the index, closely followed by Hungary, Serbia, Croatia, Bosnia & Herzegovina and Montenegro, all with similarly low scores. 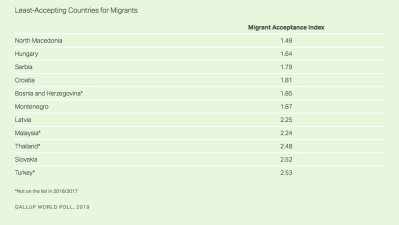 When hundreds of thousands of refugees and migrants were making their way across Europe in 2016-2016, North Macedonia was their first entry point on the so-called Balkan route after Greece. As the wave of migration caused deep international tensions in the EU, in 2016 the bloc’s leaders agreed to end irregular migration, and countries along the route shut their borders. Skopje shut its border to migrants from Greece, leaving thousands stranded in camps near the border. The situation caused tensions between North Macedonia (then named Macedonia) and the EU, with Skopje complaining it was bearing the brunt of the crisis – stopping migrants from one EU country from entering the rest of the EU while being blocked from progressing towards EU accession.

Another country on the route, Hungary, was the most vocal opponent of migration, building a border fence and pushing back migrants as well as fighting the EU’s quota system.

“Gallup's Migrant Acceptance Index was largely born out of reaction to the migrant crisis that swept Europe in 2015. Amid the backlash against migrants, Gallup developed the index to gauge people's acceptance of migrants, not only in Europe but throughout the rest of the world,” says the report.

Since Gallup's first measure of people's acceptance of migrants in 2016 and 2017, and the signing of the Global Compact on Migration in 2018, people's acceptance of migrants has declined globally, and people are even further apart in some countries than they were before. These divides underscore the challenges that remain as the world, and the future of migration policy, both try to find their footing in the post-coronavirus (COVID-19) pandemic world.

Also among the top 10 least accepting countries are Latvia, Thailand, Slovakia and Turkey.

“Turkey's appearance likely reflects the burden the country took on with the 2016 deal with the EU to keep refugees in its territory. The country currently hosts an estimated 4mn refugees and migrants, and the 2016 deal has since collapsed,” says the report.

However, not all countries from the region have seen attitudes towards migration harden as a result of the crisis.

Moldova saw the biggest increase in migrant acceptance between 2016 and 2019 of any country worldwide, which Gallup suggests is linked to the arrival of Turkish, Azerbaijani and Uzbekistani migrant workers into the country, many of them enrolled in foreign companies that brought in EU funds for various development projects.

There were also substantial increases in Kosovo, Azerbaijan, Lithuania, Poland, Tajikistan and Slovakia – to some extent. In Poland, for example, Gallup reports people became more likely to see migrants in their country or even as their neighbours as a good thing, but were less likely to welcome migrants as members of their families.

The index is based on three questions: whether people think migrants living in their country, becoming their neighbours or marrying into their families are good or bad. The index is a sum of the points across the three questions. The higher the score, the more accepting the population is of migrants.

Biggest increase was in automotive fuel sales, up by 13.4%.

GDP down in annual terms but increased by 6.6% on second quarter as economy started post-lockdown recovery.

The coronacrisis has cost Russian companies RUB3.8 trillion ($47bn) in lost profits this year as of August this year, according to the latest data available.

New coronavirus infections continued to rise alarmingly in Central and Southeast Europe as the centre of the pandemic shifts back to Europe.

World Bank forecasts Serbia’s economy to shrink by just 3% as it benefits from the Western Balkans’ biggest stimulus package and a low share of tourism in the economy.