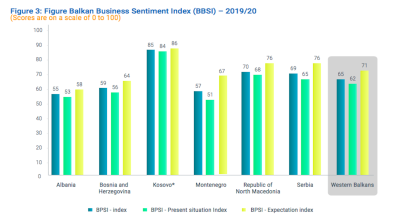 The Balkan Business Sentiment Index (BBSI) reached a historic high 65 points in 2019, continuing its increasing trajectory that was briefly interrupted in 2018.

The increase was driven by bright future expectations more than by the present situation, as businesses face a range of obstacles including corruption.

Respondents said corruption is one of the biggest problem in the Western Balkan countries, with 71% of citizens considering that their governments failed to fight corruption successfully in 2019, which is up by 10pp from a year earlier, the EU enlargement commissioner said on June 24, citing the results of the Balkan Barometer 2020 survey.

On a more positive note, EU Commissioner Oliver Varhelyi said that one of the things from the survey which is important for him is that 59% of citizens of the six Western Balkan countries believe that EU membership is a good thing, which is 10pp more than in the previous two years. 26% believe their countries will never achieve EU membership.

Varhelyi added that the European Commission is expected to present the draft negotiation frameworks for Albania and North Macedonia in the next days, even though the document was expected much earlier.

The Balkan Business Opinion Barometer for 2020 showed that the Western Balkans are generally satisfied with the outcome of 2019, though there were variations between countries.

The political crisis, lack of democratic procedures and pronounced uncertainty in Montenegro caused an across the board drop in satisfaction with the government’s conduct, stability, and predictability of laws and an increased sense of corruption.

On the other hand, the commitment of the government of North Macedonia helped the scores to rebound.

Approaching EU prospects in North Macedonia and Albania has had a positive effect on the perception of businesses. The pool of pro-EU businesses expanded in Albania and the North Macedonia by 20 and 15 pp, respectively.

EU-financed Balkan Barometer 2020 is the sixth edition of the Regional Cooperation Council (RCC) of the annual business opinion survey commissioned by the RCC.

After the initial lockdown, sales of non-food goods defied the crisis and advanced steadily, posting a 10.8% y/y annual advance in Q1.

Headline CPI jumped to 4.3% year on year in April. The idea that the National Bank of Poland can mimic the accommodative stance of the Fed or ECB is increasingly debatable. In terms of inflation, Poland is closer to the emerging markets.

Russians Services PMI remains a strong 55.2 in April but slowed a little from March, optimism for the rest of the year high

The seasonally adjusted IHS Markit Russia Services Business Activity PMI index slowed a little in April to 55.2, down slightly from 55.8 in March, but remains robustly above the 50 no-change level as services bounce back.

Romania’s retail sales up 4.1% y/y in Q1
1 day ago
ING: Inflation pressure continues to build in Poland
1 day ago
Russians Services PMI remains a strong 55.2 in April but slowed a little from March, optimism for the rest of the year high
2 days ago
Bucharest Stock Exchange up 15.7% ytd despite modest performance in April
3 days ago
DATACRUNCH: Ukraine starts to close the gap with Russia
3 days ago