BALKAN BLOG: What Turkey’s Erdogan can offer the Western Balkans 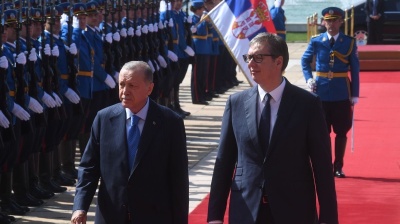 Turkey’s President Recep Tayyip Erdogan spent this week visiting three Balkan countries — Bosnia & Herzegovina, Serbia and Croatia — as his country seeks to extend its influence in the region. As well as various economic deals, Erdogan offered Turkish help with some of the pressing security issues in the region, namely the internal tensions in Bosnia and the situation between Serbia and Kosovo.

During his visit to Belgrade on September 7, Erdogan said the region would have Turkey’s support to resolve the disputes that threaten its stability.

“We are ready to extend our support and I hope that there is now a positive acceleration which will be sustained in the Balkans, because the Balkans can no longer tolerate these kind of problems,” he said at a press conference alongside Serbian President Aleksandar Vucic.

Commenting on the situation in Bosnia too, Erdogan added that Ankara would like to help the ethnic groups in the country “find reconciliation”.

Turkey is by no means the only interested party in this region. As a tense standoff developed between Serbia and Kosovo over the summer, both the EU and the US dispatched special envoys in a diplomatic offensive aimed at preventing any potential outbreak of violence. The international community has been represented since the wars of the 1990s by its high representative in Bosnia. As well as the Western powers, both Russia and China have an interest in the region.

So what does Turkey bring? As the world — or at least the northern part of it — divides along East/West lines following Russia’s invasion of Ukraine, Ankara has positioned itself as a neutral partner between the two. This put it in a position to broker the July Istanbul grain deal that enabled Ukraine to resume grain shipments by sea. The implication is that as a country not fully in either the Western or the Eastern camp, it may bring a similar perspective to the Western Balkans.

Turkey has a long history with the region, which was part of the Ottoman Empire, and it remains the small Southeast European countries’ big neighbour and by far the largest economy in their immediate vicinity. On top of that, Erdogan personally has good relations with several of the Western Balkan leaders. That is not only obvious allies like Bakir Izetbegovic, leader of the Bosniak Democratic Action Party — Edogan was best man at Izetbegovic’s daughter’s wedding — but also Serb politicians such as Vucic and Bosnian Serb leader Milorad Dodik, who is a fan of strongman leaders like Erdogan and Russian President Vladimir Putin.

Speaking to Turkey’s Anadolu Agency,  Dejan Vuk Stankovic of the University of Belgrade suggested that Erdogan personally could bring “creative solutions” to the outstanding problems of the Western Balkans. “His political authority and international reputation are enough to calm tensions, and his diplomatic skills can open up space for creative solutions in the case of Bosnia-Herzegovina," said Stankovic.

However, he considered that given the deep involvement of the EU and the US in the Kosovo situation, “the possibility of influence by any third actor is very limited”.

The Turkish president arrived in Bosnia on the first leg of his tour amid a heated dispute within the country over amendments to the electoral law, less than a month ahead of the October 3 general election.

With Dodik and other Bosnian Serb politicians repeatedly challenging the authority of Bosnia’s state-level institutions and threatening the secession of the country’s Serb entity Republika Srpska, at the beginning of this year Bosnia was singled out by EU foreign policy chief Josep Borrell as one of Europe’s two security hotspots (along with Ukraine). While Moscow’s influence has waned in the region, it still has a lot of clout in Republika Srpska, giving the Kremlin the potential to further destabilise the situation within Bosnia.

On his arrival in Sarajevo on September 6, Edogan weighed into the ongoing debate on the controversial electoral law changes, voicing his opposition to the changes planned by High Representative Christian Schmidt.

“Decisions related to the electoral law must be taken by the [Bosnian] leaders and the intervention of the high representative is not needed,” Erdogan said at a press conference during a visit to Sarajevo, N1 reported. In a statement that may have surprised observers of Turkey's authoritarian leader, he added that the intervention "contradicts democratic principles".

He added that there is no time to amend the electoral law ahead of the October 2 general election. “The intervention of the high representative is a threat to democratic process. We want the election to go well,” the president said. He also discussed the situation in Bosnia during his visit to Croatia later in the week.

The situation between Serbia and Kosovo was equally incendiary over the summer, when Kosovo’s Prime Minister warned that war could not be ruled out. Kosovo declared independence from Serbia in 2008, but it is not recognised by Belgrade as a separate state, and tensions periodically spike. This summer, the cause of the elevation in tensions was Pristina’s decision not to recognise Serbian ID documents and car number plates. The situation was partially resolved when the two sides reached an agreement on ID cards, but the question of car number plates still has to be tackled.

What’s in it for Turkey?

Turkey has been working to build up its regional influence — reaching out to the Middle East, including Israel, Central Asia, the South Caucasus as well as the Western Balkans, where Ankara has been expanding political and economic relations simultaneously.

Erdogan’s visit comes at a time ahead of the Turkish strongman's plan to seek reelection in a poll that must take place by June 2023. Given Turkey’s economic woes and the growing strength of the opposition, foreign policy triumphs would be helpful. Playing to an audience at home, he even made a threat to Greece that Turkey could "come all of a sudden one night" at a press conference in Sarajevo.

A comment on Turkey’s strategy in the Middle East published by think-tank the ECFR in July says: “President Recep Tayyip Erdogan remains politically vulnerable at home, with a deteriorating economy and the opposition leading in the polls. His government’s survival now depends on efforts to balance between great powers and draw financing from former rivals in the Gulf.”

Aside from the politics, there is the economic dimension. A raft of deals were signed during Erdogan’s visit to Serbia, the biggest economy in the region, and Belgrade asked for Turkish help with planned electricity deliveries from Azerbaijan this winter and expressed interest in buying Bayraktar combat drones.

There are hopes that trade between Turkey and Serbia, the region’s largest economy, will more than double to $5bn this year. Turkey’s investment into Serbia — including in a number of clothing factories — have already increased sharply. In total, Turkish companies employ almost 10,000 people in Serbia.

On this visit, Erdogan was accompanied by a large business delegation. "Today we discussed even stronger co-operation in many areas and we signed a large number of agreements – from encouraging and protecting investments to innovations in advanced technologies,” Vucic said at the joint press conference, also talking of a ‘golden age’ of Serbian-Turkish relations.

However, there are tensions between Turkey and some of the Western Balkan countries, with the presence of Gulenist opposition figures in the region one cause of contention. Ankara has several times demand the extradition of teachers working at schools led by US-based, self-exiled Turkish cleric Fethullah Gulen, whom Turkey considers to be head of an organisation that it alleges in 2016 mounted a failed coup against Erdogan, though Gulen strenuously refutes the claim.

One deportation of a claimed Gulenist from Kosovo created a political scandal in the country. More recently, Tirana’s reluctance to extradite suspected Gulenists is believed to have been behind the cooling of once warm relations between Erdogan and Albanian Prime Minister Edi Rama; Albania is conspicuously not part of the ongoing tour.

Extraditions from the region have been criticised by Borrell, who earlier this year stressed that the EU expects the Western Balkans countries “to act in full respect of the rule of law”.

This is just part of EU and West European politicians’ unhappiness with Turkey extending its influence in the region — even though the main concerns remain Russian and Chinese influence. French President Emmanuel Macron even said explicitly in 2018 he did not want a “Balkans that turns toward Turkey or Russia”.

Fear of rival powers gaining ground in the EU-aspiring states of the Western Balkans was a crucial motivator for the EU in particular to step up its engagement. However, given Turkey’s long history in the region and its position as its neighbour to the south, Turkish involvement is inevitable.